Cars will require no human intervention on motorways at low speeds 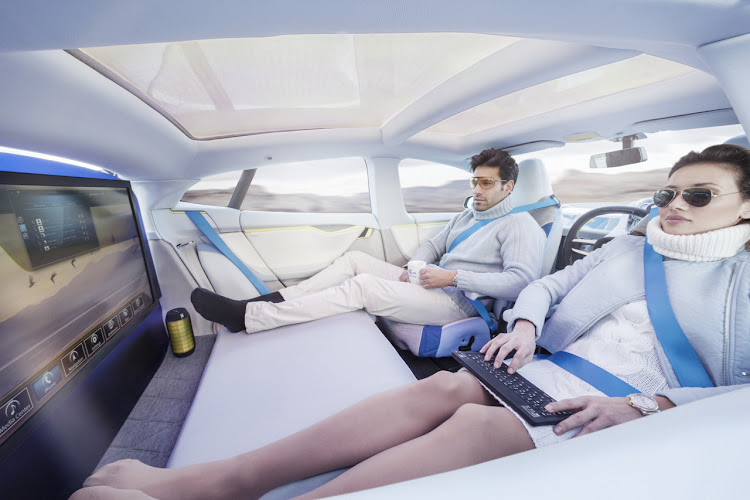 The end goal is to have fully autonomous cars that can drive themselves in all conditions. Picture: SUPPLIED

British drivers will soon be able to read a newspaper or watch a movie while driving in certain conditions.

The UK government on Wednesday became the first country to announce it will regulate the use of self-driving vehicles at slow speeds on motorways, with the first such cars possibly appearing on public roads as soon as this year.

Britain's transport ministry said it was working on specific wording to update the country's highway code for the safe use of self-driving vehicle systems, starting with Automated Lane Keeping Systems (Alks) which is a hybrid of adaptive cruise control and lane-keeping assistance.

Alks allows the driver to delegate the driving to the vehicle under certain circumstances and take their hands off the wheel, unlike current driver assistance systems where the driver must remain in control of the vehicle at all times.

The UK government said the use of Alks would be restricted to motorways, at speeds under 60km/h.

The UK’s transport ministry forecasts by 2035 about 40% of new UK cars could have self-driving capabilities.

"The automotive industry welcomes this vital step to permit the use of automated vehicles on UK roads, which will put Britain in the vanguard of road safety and automotive technology," Mike Hawes, CEO of car industry lobby group the Society of Motor Manufacturers and Traders, said in a statement.

But insurance companies warn that automakers and regulators must spell out the current limitations of the technology available today.

They say calling Alks “automated” or “self-driving” will confuse drivers into thinking the cars can drive themselves, causing accidents and risking a public backlash against the technology.

“Aside from the lack of technical capabilities, by calling Alks automated our concern also is that the UK government is contributing to the confusion and frequent misuse of assisted driving systems that have unfortunately already led to many tragic deaths,” said Matthew Avery, research director at Thatcham Research, which has tested Alks systems.

The dangers of drivers apparently misunderstanding the limits of technology has been an issue in the US, where regulators are reviewing about 20 crashes involving Tesla’s misleadingly-named Autopilot driver assistance system.

The deaths of two men in a Tesla crash in April is under investigation in the US, with no-one believed to have been in the driving seat. Another Tesla driver was using the car’s “self-driving” function and playing a video game when he died in 2018.

Self-driving technology is being rolled out to improve road safety given that the vast majority of road collisions involve human error. The end goal is to have fully autonomous cars that can drive themselves in all conditions, though the technology is taking longer to perfect than initially expected.

Cars with adaptive cruise control and lane keeping systems have been available for several years now. However, until the United Nations Economic Commission for Europe (Unece) regulations were introduced last year there was no internationally standardised approach for more advanced automated systems.

The Alks system is for use only on motorways, where traffic flows in the same direction and no pedestrians or cyclists are permitted. It must hand back control to the driver when required, such as when a traffic jam clears and traffic speeds up.

In the wake of a fatal crash, a test finds the car fails to warn that the driver’s seat is empty
Companies
1 week ago

Preparing for a driverless-car future, Princeton team invents a radar wristband for pedestrians
Life
1 month ago