Affordable electric vehicles (EVs) for the masses are still some years away, but the premium end of the market has a growing array of choices for well-heeled early adopters of nonpolluting cars.

The Porsche Taycan launched last year demonstrated that not only can battery-powered cars be friendly to the planet, they can be exciting too. The range-topping Taycan Turbo S — which retains conventional petrol-engined nomenclature even though it’s an electric — is a 560kW beast that accelerates quicker than a Formula One car for the first couple of seconds. Its 0-100km/h time is claimed at 2.8 seconds — about the same as the petrol-engined Porsche 911 Turbo S — and it has a 260km/h top speed.

Having wowed us with such fearsome figures in its halo electric model — including its R3,977,000 price — Porsche has now launched the Taycan in an entry-level version selling for R2,227,000. It’s available in two power outputs — a standard 300kW with an overboost mode and launch control, and an optional Performance Battery Plus that increases output to 350kW. It’s the latter version on test.

The range also offers a 4S model with 390kW and a Turbo with 500kW, both of which were launched last year at the same time as the Taycan Turbo S.

Though the newest and most affordable version — simply called the Taycan — has none of the peel-your-face-back intensity of a true supercar, there’s more than enough sporting prowess to paint a smile on your dial and its 5.4 second 0-100km/h time and 230km/h top speed are nothing to sniff at.

The main enjoyment of electric cars lies in their instant response, and a firm shove of the throttle sends this Taycan forward at a brisk and lag-free pace. There are no gears; it’s a seamless and instant surge of power that’s useful for stealing gaps in traffic or quick overtakes.

It all happens with disarming silence too, unless you select the Porsche Electric Sport Sound switch that augments the typical electric-car motor noise.

The entry-level version is the only Taycan that’s driven by its rear wheels, and the other models have all-wheel drive to better harness their extra power.

It gives this Taycan a playful nature, with a tail flick easily enticed when you’re eager with the throttle in corner exits. That said, any sideways action is quickly quelled by the stability control system, and this rear-wheel drive car is exuberant without being a handful to drive.

It drives like a proper Porsche too, with a chassis that delivers exceptional handling. Batteries mounted in the floor provide a low centre of gravity and much nimbler cornering manners than you expect of a nearly 5m long car that weighs two tons, and the steering delivers the Porsche-typical directness and meaty feel. 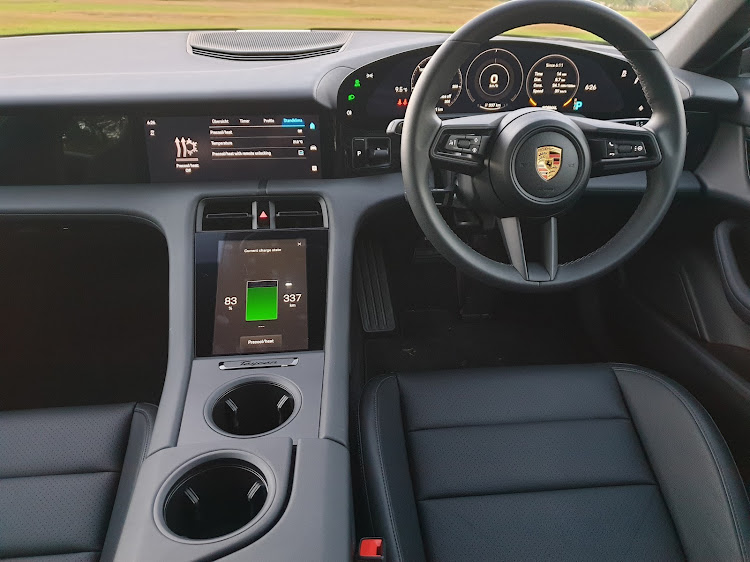 The car comes out the box with steel-spring suspension while optional adaptive air suspension is available. The test car’s standard steel springs delivered an impressively cushy ride that was arguably the highlight of the car, and I doff my cap to Porsche’s engineers for producing a car with such an impressive ride/handling balance.

With both suspension systems, the Porsche Active Suspension Management (PASM) electronic damper control system allows the driver to soften or firm up the ride at the press of a button.

The Taycan makes a practical family car with its roomy four-seater cabin and two luggage compartments: 84l at the front and up to 407l at the rear.

The cabin is all comfort-packed luxury and digitised flair, the latter including a curved instrument cluster and central touchscreen infotainment display. It is mostly user friendly though the direction of air flow in the vents can only be adjusted using the touchscreen, which is an impressive party trick but more time-consuming and distracting than manually-adjustable vents.

Apart from price, the elephants in the EV room are always range and charging time. On a public DC fast charger, it’s claimed the Taycan’s battery can be charged from 5% to 80% in a fairly rapid 22.5 minutes.

The driving range is claimed at up to 484km and after driving the Taycan for two days on urban and open roads a 400km-plus range seemed attainable, which for many people means commuting for a whole week without needing a plug in. Such a range also invites longer-distance exploration on weekends, rather than being confined to urban jungles in close proximity to charging stations.

As for the expensive prices of EVs, those will require time and economies of scale to bring down, along with government levelling the playing field by reducing EV import duties to the same level as combustion-engined cars.

For now, the entry-level Taycan is a more palatably-priced Porsche electric sports sedan, and swift enough so that environmentally-conscious drivers needn’t give up on the fun factor.

The iconic 911 will continue as a hybrid, or with a petrol engine that runs on clean e-fuels
Life
1 month ago