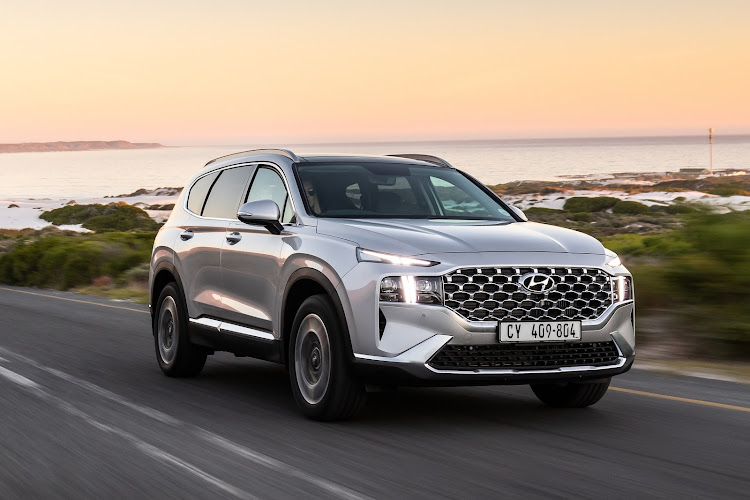 The supersized new grille is anything but subtle. Picture: SUPPLIED

Contentious snouts are trending in the automotive world, and while we’re still trying to digest the fearsome nostrils of the recently launched new BMW 4 Series, Hyundai has launched a Santa Fe with a formidable front maw.

The cascading grille is so large and dominant that other motorists might feel they’re about to be swallowed by a whale shark. But like that gentle aquatic giant, the Santa Fe’s imposing presence belies a tranquil nature.

The extensive update goes beyond a normal midlife facelift and the 2021 Santa Fe also adopts an interior revamp along with technological and refinement upgrades, in a bid to lure customers from SUV rivals such as the Kia Sorento, Land Rover Discovery Sport, Ford Everest, Toyota Fortuner and Audi Q5 among other vehicles.

The supersized grille is flanked by new T-shaped daytime running lights as part of an extensive revamp for Hyundai’s seven-seat SUV. At the rear the car gets a far less dramatic nip and tuck, which includes the exhaust tips being hidden away.

Inside the Santa Fe’s restyled cabin are smart new leather seats with a diamond-stitched pattern and new floating centre console design, while the gearshift knob is replaced by buttons.

A mechanical update sees the four-cylinder 2.2l turbo diesel engine getting a slight tweak to 148kW and 441Nm (from 145kW and 436Nm), and the old torque converter automatic gearbox replaced by a dual-clutch auto.

The chassis has been increased in rigidity and reduced in weight for improved ride and handling, and better front collision protection.

Both models are stacked to the hilt with comfort and safety, including new convenience features such as a rear view monitor, wireless smartphone charger and a powered tailgate. The vehicle can be remotely started from the outside using the smart key, which sets the cabin temperature at 22°C.

Hi-tech safety includes blind spot warning, rear cross-traffic warning and safe exit assist — the latter issues a warning to a rear occupant attempting to open the door while a vehicle is approaching from the back. These are in addition to six airbags, ABS brakes and stability control, and the Santa Fe has a five-star Euro NCAP crash rating.

The Elite all-wheel drive is equipped with a new Terrain Driving Mode with different driver-selectable settings for changing surface conditions including snow, mud and sand — in addition to the existing Sport, Comfort and Eco modes.

The large cabin comfortably accommodates four or five adults inside the 4,785mm long vehicle, with a third row of two fold-out seats to accommodate children. The large boot houses a full-size spare wheel.

The Santa Fe is impressively refined both in sound suppression and ride quality. It offers one of the most comfortable rides in the midsize SUV segment, with yielding suspension that floats with great finesse over rough surfaces — even in the Elite model I drove with its lower-profile 19” tyres. The Executive version promises an even waftier ride on its 18” rubber.

The engine’s quiet and punchy, and the new dual-clutch transmission is as smooth as triple-distilled whisky. With its cushy ride and all-round refinement, this family focused Hyundai promises comfortable long-distance family expeditions.

It’s very economical too, with the test car averaging 7.2l/100km during my drive on mostly open roads at the launch.

Mod cons are plentiful and I particularly liked the user-friendliness of the wireless charging nook, which holds smartphones upright and is located between the front seats for easy accessibility.

New Kia Sorento unveiled with latest in tech and luxury