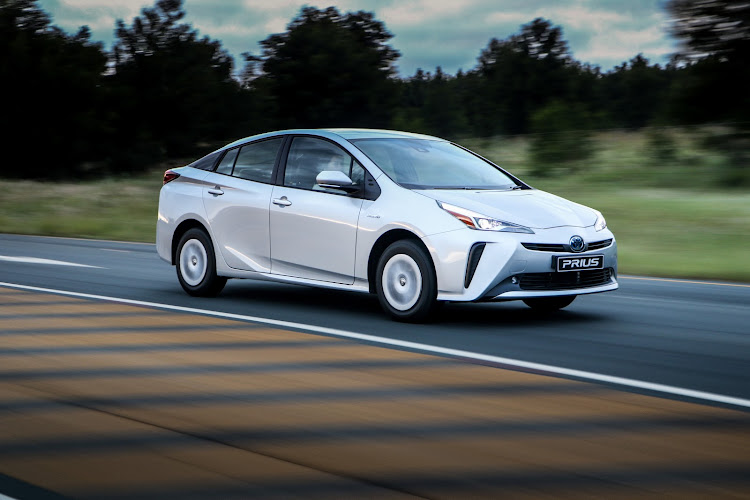 Toyota’s Prius hybrid is the car that championed eco-consciousness in the motoring world. It made green living hip long before Tesla arrived on the scene.

It is still available in eight exterior colours but pearl white has been replaced by a new platinum white pearl hue.

On the inside the Prius gets nifty tech in the form of a head-up display (HUD), a reverse camera, a high-definition multi-information display, seat heaters, wireless mobile phone charging, dual-zone climate control, rain-sensing wipers and an auto-dimming rearview mirror.

There is also a higher-resolution touchscreen infotainment system with a six-speaker system that supports media playback through auxiliary, USB ports and Bluetooth. It is updated to include Apple CarPlay and Android Auto.

Toyota Connect, which is installed as standard and caters for in-car Wi-Fi connectivity with a complimentary 15Gb of data on purchase, serves as a telematics interface with the MyToyota app.

The Prius still uses a hybrid 1.8l four-cylinder petrol engine mated to an electric motor and a CVT transmission. Total system output is 90kW and 305Nm.

The car uses deceleration, braking and the petrol engine to regenerate battery energy to support full electric vehicle mode, which is accessible only at speeds below 40km/h.

The powertrain is adjustable in three ways: solely on the petrol engine, the electric motor, or a combination of the two.

The iconic 911 will continue as a hybrid, or with a petrol engine that runs on clean e-fuels
Life
1 month ago