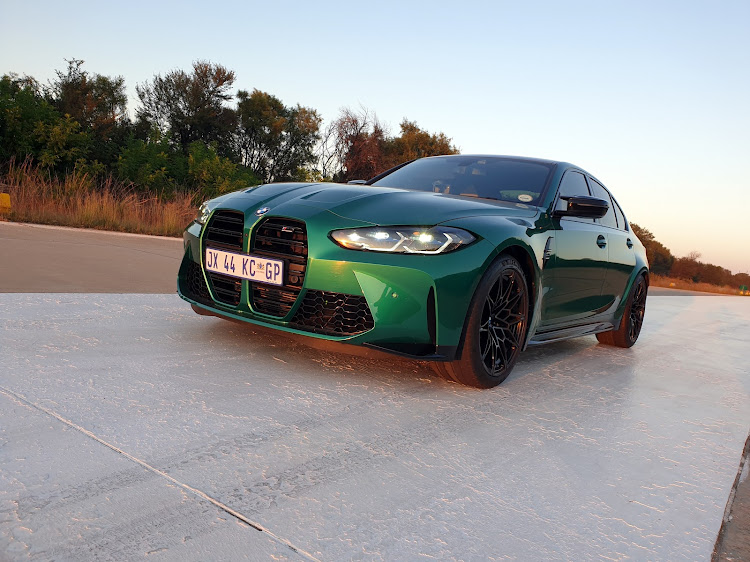 Much has been said about the contentious bucktoothed grille of the new-generation BMW M3 and M4, but just how big is the bite behind it?

To find out, we took the M3 for a high-performance evaluation at the Gerotek test centre near Pretoria, using a Vbox to measure its acceleration figures.

To recap, the M3 four-door sedan and M4 two-door coupé were launched in SA last month in Competition guise, which means they’re powered by the most muscular version of the twin-turbo six-cylinder 3.0l in-line engine.

The standard M3/M4 (not available in SA) have outputs of 353kW and 550Nm while the Competition models fire out 375kW and 650Nm. Transmission duty is performed by a torque converter eight-speed automatic instead of the previous twin-clutch M-DCT. Initially the M3/M4 Competition are available only as rear-wheel drives, with xDrive all-wheel drive versions to follow later in the year.

The new-generation 3.0l turbo engine is a more rev-hungry unit than the previous M3’s, with max power and torque figures produced at higher rpm.

Once the car’s on the move it feels very spirited, and the slick-shifting auto ‘box keeps it in its power band up to the 7,000rpm red line. Throttle inputs are rewarded with entertainingly forceful response and overtaking long trucks is done in the blink of an eye.

However, there’s not much happening below 3,000rpm in the high-revving engine, making the new M3 feel fairly languid in initial standing-start acceleration if the launch control function isn’t engaged. It’s a slow-acting launch system that takes about three seconds to build up revs and turbo boost with the throttle pressed flat and your left foot holding the brake. This isn’t exactly practical, and doesn’t sound like it’s too mechanically sympathetic either.

Officially the M3 delivered the goods by posting a rapid 0-100km/h of 3.8 seconds at Gerotek. That’s very impressive, and one-tenth quicker than BMW’s official claim. It’s also quicker than the 4.2 seconds we recorded in the rival 375kW/700Nm Mercedes-AMG C63 S.

Should one be provoked into a traffic-lights dice, however, it’s tricky to co-ordinate the BMW’s long-acting launch control with when you think the light will turn green. Without the launch system the M3 takes about five seconds to hit the 100 mark. In the real world the C63 is likely to win more dices with its quicker-acting launch control.

Numbers aside, the new M3’s a highly accomplished sports sedan that’s searingly fast but civilised. Top speed is 290km/h and the car has the high-speed directional stability of a train. It has a smoother ride than the old M3 and rides imperfect roads with good finesse for a sports sedan, making it a fairly comfortable daily commuter.

From an emotional point of view it’s become more refined and civilised, particularly in the acoustic stakes where, even with the sports exhaust mode engaged, it’s sportily hoarse without being skin tinglingly loud.

In terms of driving dynamics the new M3 displays a high degree of sporting prowess deserving of the M badge however. The traction is superb, assisted by an Active M Differential that allows you to go early on the throttle in corner exits. 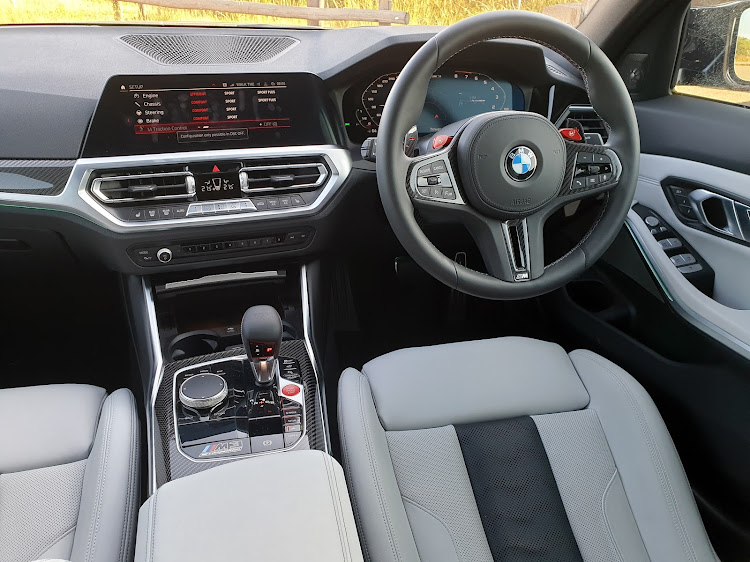 The rear-wheel drive M3 is no handful to drive with the stability control engaged, and it’s playful but controlled when driven on the ragged edge, though the rear tyres spin up clouds of smoke when the electronic nannies are switched off.

Standard in the Competition versions is an M Drive Professional package for track driving. It features M Traction Control that can be adjusted through 10 stages, an M Drift Analyser which rates your power slides, and a lap timer.

The car goes from fairly comfy commuter to an edgy athlete at the press of a button, with the steering and throttle responses adjusted along with the suspension stiffness.

This family-friendly sporting Beemer has four doors and comfortably takes four adults inside its sound-deadened cabin, and the rear seats flip down to create a large maw for supersized shopping expeditions.

And, for all its performance ability, the M3 doesn’t quaff fuel at too alarming a rate. Driven normally the test car averaged about 11l/100km; with high-performance testing the figure rose to about 13l.