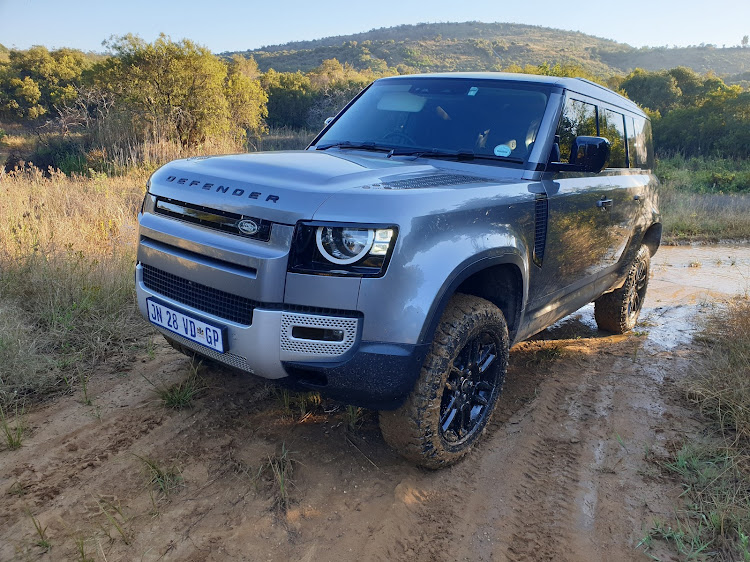 Height-adjustable air suspension an an array of traction-enhancing aids make the Defender a master of off road terrain. Picture: DENIS DROPPA

The best moment of driving the Defender came on a bumpy access road to my regular mountain biking park.

On this particular day, the one-tonner bakkie in front of me was having a really hard time of it, bouncing along that road like a pogo stick even at the crawling pace the driver was prudently maintaining.

Seeing I could go faster, he waved me past, and quickly became a shrinking dot in my rear-view mirror as the Landy, with its air suspension and high-profile tyres, wafted almost leisurely over that broken road.

Cynics may accuse the new-generation Defender of having sold its soul by becoming too modern and digitised, and perhaps they’re right. But it’s an impressively capable all-terrain vehicle that excels on bad roads.

Apart from a smooth ride that irons out craters, it has offroad ability that does justice to its rough 'n tough Defender progenitor even though independent suspension has replaced the live axles of its ancient predecessor, and the old body-on-frame has given way to a unibody design.

A jaunt through the 4x4 test circuit at Gerotek proved as much, and with its all-wheel drive system, diff locks, low range transfer case and elevated ground clearance, the new Defender doddled through the tough course without batting a metaphorical eyelid.

The numbers are impressive with 500mm of axle articulation, 291mm of ground clearance with the air suspension at its maximum height and a 900mm wading depth.

Engaging its off road tricks is user friendly. The different modes — including rock crawl, grass/gravel/snow, and sand — are accessed by touching a button or icon in a hi-tech digital interface, instead of the notchy levers that needed manhandling in the original Defender.

Video cameras project the offroad surroundings onto the dashboard screen, helping to prevent a costly encounter with a hidden rock or tree stump. Though purists might scoff that this vehicle’s a far cry from its workhorse roots, modern technology has both improved the Defender’s terrain-taming ability and made it more accessible to the average driver. 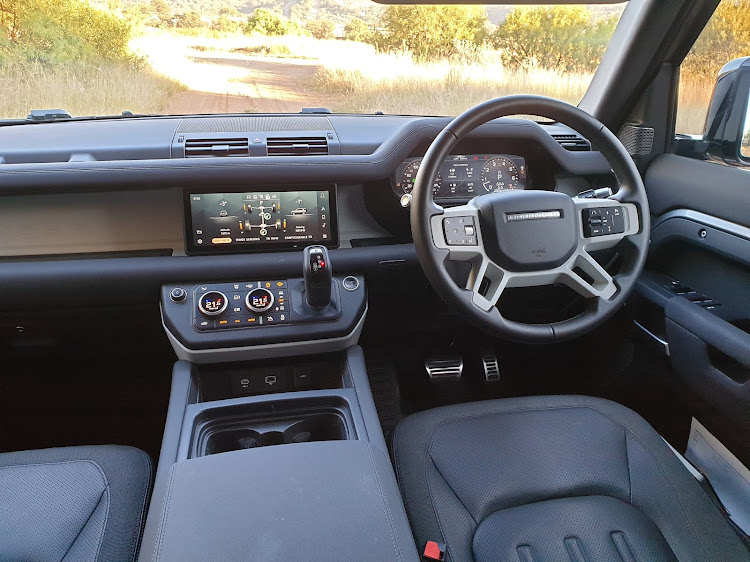 The luxurious, digitised cabin is a far cry from the Defender’s workhorse roots. Picture: DENIS DROPPA

The petrol version has a lot more spring in its step, accelerating with verve for such a heavy SUV and producing a sportingly hoarse engine note to boot. It feels noticeably less laggy than the 2.0 diesel in a standing start and claims a hot hatch-like 0-100km/h sprint of just 6.1 seconds, with a 191km/h top speed.

It’s around 2l /100km thirstier than the diesel (the petrol Defender claims 9.9l/100km and the test vehicle used 13l) while a 90l fuel tank makes for a decent range between fill-ups.

The Defender 110 is a large piece of hardware and parking can be a challenge, even with the aid of its parking cameras and warning sensors. Its bulk and weight are always apparent and it’s no corner-carving sports SUV in the realm of a Cayenne or X5, but it doesn’t feel excessively soggy given its wafting ride quality.

The new Defender’s boxy styling radiates toughness, and that robust feel continues inside the cabin alongside all the ambient-lit luxury and modern amenities. It all feels solid and sturdy with chunky hand holds, and there are exposed bolt heads as a stylistic nod to the Defender’s workhorse origins.

A third row of seats provides emergency seating for small children, and these fold flat into the floor to provide a capacious 743l boot. The first two rows are very roomy inside this 5m long car, and there’s head and legroom aplenty for family expeditions.

Modern infotainment provides all the necessary smartphone connectivity, and there are charging points galore.

Old-school purists might harrumph that the new Defender is nothing more than a reskinned Discovery, halfheartedly related to its iconic ancestor only by its boxy design.

Others might argue that it takes no imagination to be uncomfortable, and there’s nothing wrong with rolling up ruggedness and retro styling into a sophisticated package with all the mod cons.

Though newly modernised, the American icon retains its offroad ability and 'old-school cool'
Life
1 year ago