The world’s most powerful convertible is a study in versatility 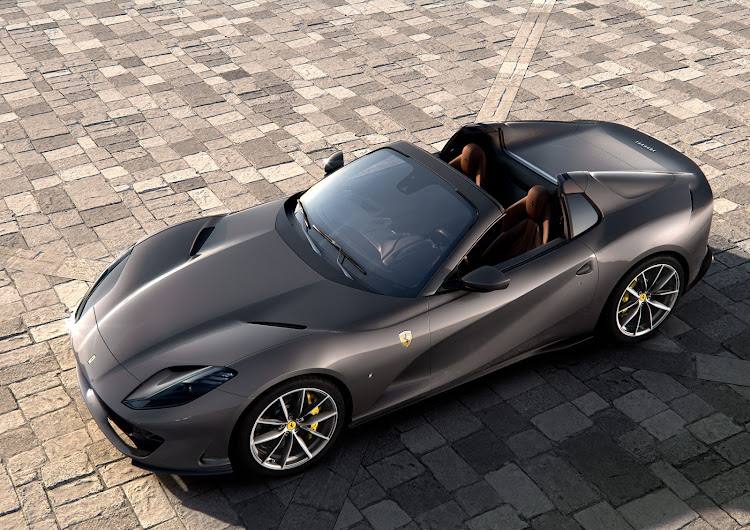 The 812 GTS is one exotic convertible you’ll want to drive all the time, even during the otherwise-mundane moments of everyday life.  Picture: SUPPLIED

Heritage is the most valuable thing any luxury car maker can possess. It is also the most expensive: it costs time.

Over its 81-year history, Ferrari has cultivated arguably the most revered heritage of any of today’s sports car makers. The company is repeatedly named World’s Strongest Brand at Davos and among the most valuable luxury houses in the world, even with rivals on its tail of late in the stock market. So it is unsurprising that Ferrari would push its 812 GTS Spider as something with blue-blood history, linking it to the Daytona Spider of 1969 — the last Ferrari convertible before this one to sport a V12 engine.

But what was surprising to me after a week of driving the car in Los Angeles was just how low-key and versatile it was. The car starts at $397,544, mind you; the one I drove cost nearly $535,000, thanks to options I’ll get to later.

When I think of Ferrari, I think of a pedigreed show pony, not a practical workhorse. But this stylish drop-top proved the exception to the rule.

The 812 GTS debuted at the Geneva Motor Show in 2019 as the convertible version of the 812 Superfast coupe. It comes with 588kW engine, which makes it the most powerful production convertible you can buy today. It will hit 100km/h in less than three seconds and has a top speed of 340km/h; that’s about as fast as anything else out on the streets, apart from a Bugatti.

Speeding up Angeles Crest Highway through the sage-dotted San Gabriel Mountains felt like entering another dimension. The 6.5l V12 pushed the car forward as if on rocket boosters; the seven-speed dual clutch wound the car around each corner as smoothly as if it were strung on a silk thread. 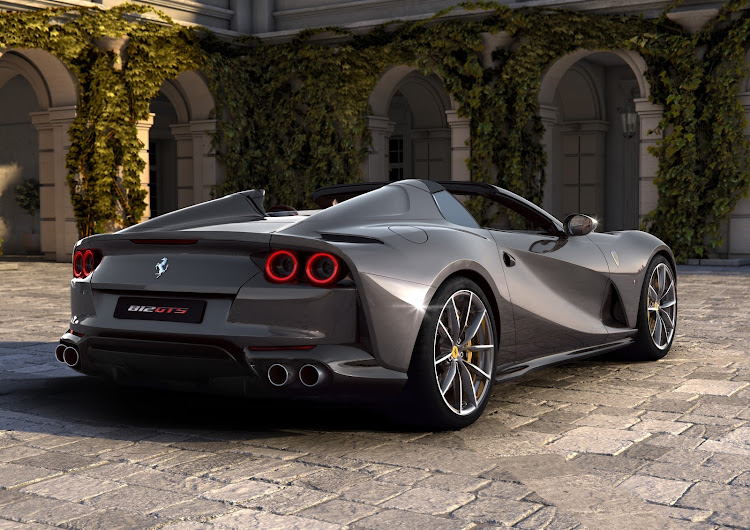 It comes with a 588kW engine, which makes it the most powerful production convertible you can buy today. Picture: SUPPLIED

I didn’t actually register those inputs as I drove — they were nowhere near that obtrusive. I had to look up what Ferrari had done to make the car feel so natural and elegant to drive. The 812 GTS is so balanced and controlled that even on the hairy, two-lane highway, it gave me the kind of confidence possessed by a newly vaccinated boomer in Boca.

I was even more grateful, though, for the 812 GTS staying quiet through it all. The “Blu Aharabian” exterior of my test car downplayed Ferrari’s usually loquacious curves and arches — all the better for earning the benefit of the doubt from the ever-watchful cops patrolling Highway 2. (Given two vehicles speeding past at the same rate, they’ll inevitably go for one that looks wilder.) Meanwhile, the retractable hardtop sealed the interior cabin so well that road and engine noise presented a low, melodic hum. My ears were grateful for the reprieve from the kind of screaming you typically expect in convertibles, let alone exotic supercars.

I’ve written before about how much I like the “Manettino” dial Ferrari keeps on its steering wheels: the little red switch allows for quick changes among drive settings. In the sportier drive modes, with the red dial turned to Sport and Race, say, both upshift and downshift times were significantly cut, while shortened gear ratios made the car’s response to the throttle feel instantaneous; under slower speeds, it allowed the car to stay nimble and light rather than bogged down, unlike the way some fast cars feel when they’re not being pushed.

This half-a-million-dollar sports car was still a joy to drive after four days of some blistering speed. It remained drama-free and light, lacking the stress that some high-priced, high-performance cars can present of breaking something or accidentally killing yourself. Some cars are so powerful that an overcorrection at high speeds (say on a tight mountain curve) or a smash on the accelerator at a stop light can send them perilously out of control.

I must admit that, aside from that run up Highway 2, I didn’t do anything too extraordinary while I had the 812 GTS for the week. I did normal things: I drove to Sunset Tower and Cecconi’s. I chose flowers from an open-air market and house hunted in Beachwood Canyon. I window shopped down Rodeo Drive. That retractable hardtop — down in 14 seconds at speeds up to 45km/h — enabled me to enjoy the glorious, sunny skies for many of my drives, apart from the one on Rodeo. (Sunscreen not included.)

And no-one batted an eye. As I said earlier — especially with the top up — this Ferrari is downright reticent in its stance. The Rodeo shoppers were far too busy watching myriad flashier, if less expensive, supercars roll past. 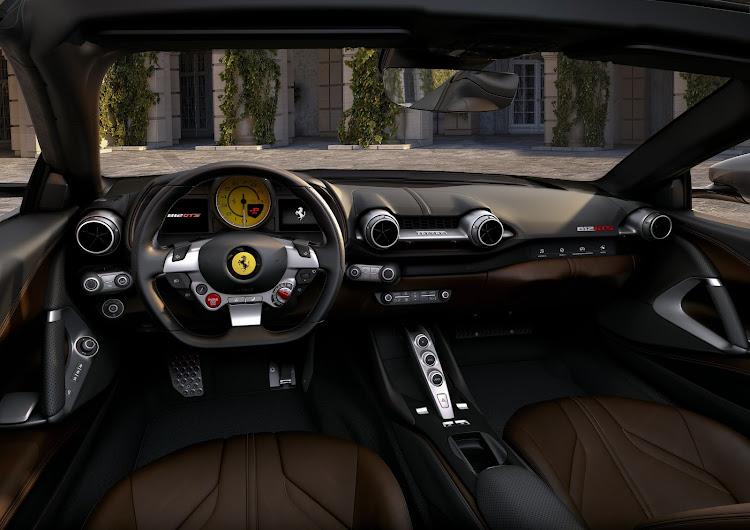 I can’t say the Ferrari is practical the way a Jeep is practical, but it is usable for a vehicle of its calibre. A lot of nice little things add up to nice big things, such as the ($5,737) lift system, which acts on the shock absorbers to add 40mm of clearance for the minor, everyday bumps and inclines that scratch other cars of its ilk. With 250l in the boot (more space than the McLaren 720S and Lamborghini Aventador SVJ roadster) it invites shopping — and allows up to three small duffel bags without constraint.

Fully electric and adjustable Daytona-style bucket seats and Grand Canyon-level legroom and headroom make the two-seat cabin feel comfortable rather than wedged. One cup holder and two USB ports (big gauges of real-life usability in a sports car), supple leathers, and a blessedly minimal dashboard configuration with a reassuring amount of tangible, analogue-feeling buttons all completed the usable feel of the car.

As I made my way past West Hollywood’s packed outdoor seating pavilions, crash-avoidance radar and parking cameras along the front and back of the car aided in any potentially sticky situations, ready to beep and light up with warnings before a collision. Buffeted by the sounds of Big Mama Thornton belting across Ferrari’s hi-fi premium sound system, I pushed a button to raise the electric rear screen that acts as a wind stop, allowing me to keep the top down — even engage in conversation — without getting pummeled by crosswinds. (One cool connection to the $2m-plus LaFerrari Aperta: both have two, small L-shaped flaps on the upper corners of their windscreens, generating a vortex to divert excess pressure behind my head. Joy!)

Options such as that sound system ($6,243) and those fancy cameras, cost plenty (a single back radar costs $2,767). So do the 20-inch, diamond-forged wheels ($8,100) and carbon fibre galore ($11,643 for the engine cover alone) found on my test-drive car. But you won’t need them to enjoy the 812 GTS Superfast. Even stripped to a bare minimum, it feels like a luxury well aimed to please.

Does it feel wasteful to drive such an exceptional, expensive car to the corner coffee shop? Never. For such an aristocratic lineage, this is one exotic convertible you’ll want to drive all the time — even, especially, during the otherwise-mundane moments of everyday life.

This is the fifth new model announced this year, with the iconic Italian carmaker set to launch 15 models between 2019 and 2022
Companies
2 years ago

1.
Would you pay R280m for a number plate?
Life / Motoring
2.
Deep, dark secrets of crew aboard wild superyachts
Life / Gadgets & Gear
3.
This might be why Michelangelo gave up completing ...
Life / Arts & Entertainment
4.
Rugged Ineos Grenadier prototypes in SA for ...
Life / Motoring
5.
These are SA’s best-selling SUVs
Life / Motoring

1.
Would you pay R280m for a number plate?
Life / Motoring
2.
Deep, dark secrets of crew aboard wild superyachts
Life / Gadgets & Gear
3.
This might be why Michelangelo gave up completing ...
Life / Arts & Entertainment
4.
Rugged Ineos Grenadier prototypes in SA for ...
Life / Motoring
5.
These are SA’s best-selling SUVs
Life / Motoring