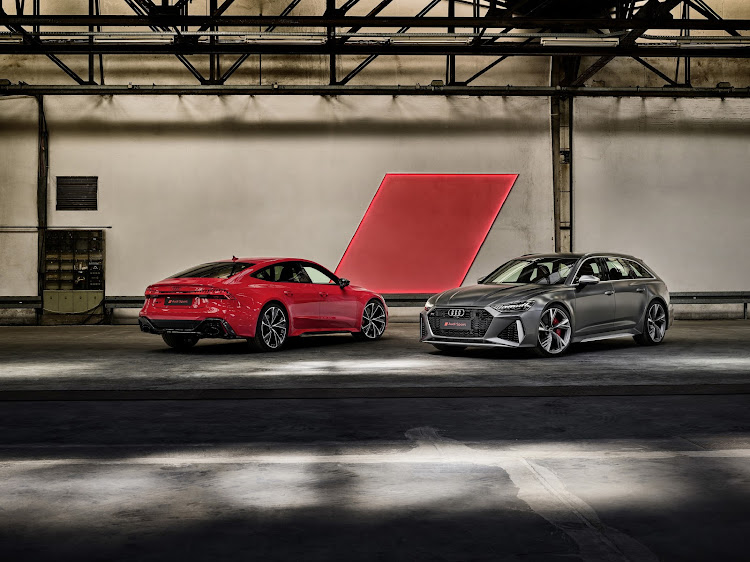 Audi has introduced steroid-boosted flagship RS models of its A7 Sportback and A6 sedan in SA.

Packing 441kW of power and 800Nm of torque from a 4.0 TFSI V8 turbo petrol engine, they offer family-sized space with scintillating performance, with the ability to scoot from 0-100km/h in just 3.6 seconds. Top speed is electronically limited to 250km/h but this can be increased to 280km/h with the RS Dynamic package.

The RS6 Avant, now in its fourth generation, is the more practical station wagon derivative while the second-generation RS7 Sportback more stylish curves.

It may have space for the labradors and bicycles, but there’s no mistaking the RS6 Avant’s sporting intent with its pumped-out wheel arches, aggressive RS bumpers, 22-inch wheels with 285/30 tyres, and gloss black honeycomb grille — features that are shared by the coupé-like RS7. Finished off by large oval RS dual exhausts and a rear diffuser, they both look like cars that can be driven straight from the family picnic to the racetrack.

HD Matrix LED headlights with laser lights come standard in both cars, and the RS7 gets an extra trick in the form of a tailgate spoiler that extends at a speed of 100km/h.

A 48V mild hybrid system (MHEV) can recover up to 12kW power under gentle acceleration and feed it into a lithium-ion battery, reducing fuel consumption by as much as 0.8l per 100km. The engine can also shut four of its cylinders under light loads, further improving fuel economy.

The V8 howls a full-bodied sound through its RS sports exhausts, which can be made even louder at the press of a button.

Power is fed to the quattro all-wheel-drive system via an eight-speed tiptronic and the cars fire off the line with a new launch control function. The quattro system adapts to driving conditions to shift up to 85% of the power to the rear wheels and up to 70% to the fronts.

The quattro sport differential, available with the optional RS Dynamic package, shifts the torque between the rear wheels as needed during sporty cornering.

The cars ride on RS adaptive air suspension that rides 20mm lower than regular versions of the A6 and A7, offering a choice between long-distance comfort and corner-attacking performance.

Driving character can be changed at the press of a button through the Audi drive select system with six profiles. Individually configurable RS modes can be activated directly using a steering wheel button.

Futuristic user interfaces include an RS monitor displaying drive system component temperatures, maximum g-forces and tyre pressures. The Audi virtual cockpit is available as standard on both of these performance models and features the RS Performance and Sport layouts.

The two cars’ sporting prowess comes with a remarkable level of leg room and practicality. Luggage capacity is a cavernous 565l in the RS6 Avant, expandable to 1,680l, while the RS7 Sportback offers 535l-1,390l. 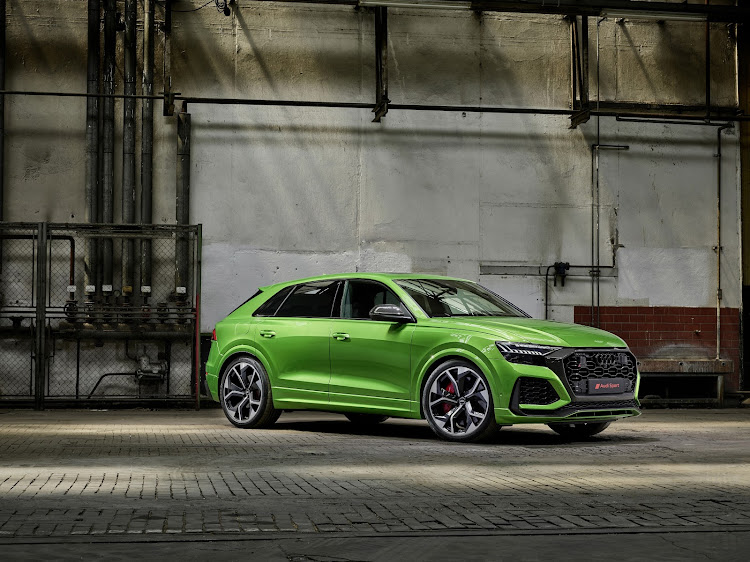 The Nurburgring-taming RSQ8 is one of a barrage of new high-performance Audis being launched in SA. Picture: SUPPLIED

* Audi has launched several other new high-performance quattro models in SA, to reach showroom floors at the beginning of April:

— The long-awaited RSQ8 holds the record for fastest SUV around the Nurburgring. Packing outputs of 441kW and 800Nm, the super-SUV is priced at R2,354,500.

— The Audi S8 arrives to take on high-performance models in the BMW 7 Series and Mercedes S-Class ranges. The V8-engined sports limousine has 420kW and 800Nm, and a pricetag of R2,484,000.