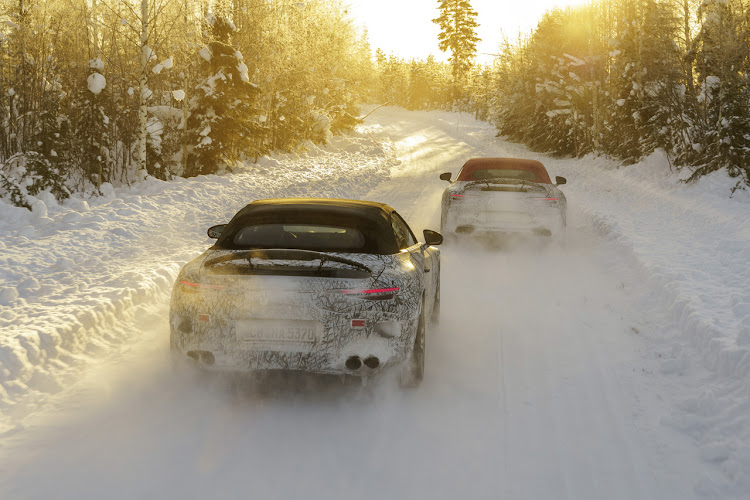 The legend of the 300 SL continues with the 2021 model which is undergoing final testing. Picture: SUPPLIED

Mercedes-Benz has announced that developmental work on its latest SL-Class is at an advanced stage before it reaches market later this year.

The new Mercedes SL is expected to arrive in SA in the third quarter of 2022.

The high-end roadster, which has been in production since 1952 and which began life as the legendary 300 SL of the 1950s, is undertaking road trials in Sweden.

Replacing the seventh-generation SL which has been on sale since 2012, the luxury GT will come loaded with some of the best new indulgences and safety tech from Mercedes.

The company chose snowy Sweden as the place to tune a new and fully variable 4Matic + all-wheel-drive system which is now offered for the first time in the SL. Other new aspects to be proven by the freezing weather are a redesigned fabric roof, confirming that the company has ditched the metal two-piece folding roof of its predecessor.

The car will be a 2+2 seater unlike its two-seater predecessors. The eighth-generation SL will become a faster and nimbler grand tourer, with its development carried out by the AMG performance division.

The new SL will share its aluminium-intensive platform with the next AMG GT.

The company says the final handling tests and suspension tuning of the new car will take place on the Nurburgring Nordschleife.

Mercedes doesn’t plan a successor to the smaller SLC (formerly called the SLK) which was discontinued in 2020.

BMW 840i Gran Coupe is a sports car in a tuxedo

Testing the most powerful AMG car money can buy

Sedan, coupé and cabriolet of best-selling Benz get styling and tech upgrades for 2021
Life
1 month ago
Next Article