Outsold by its peers, model fights back with updated infotainment and fuel-saving technology 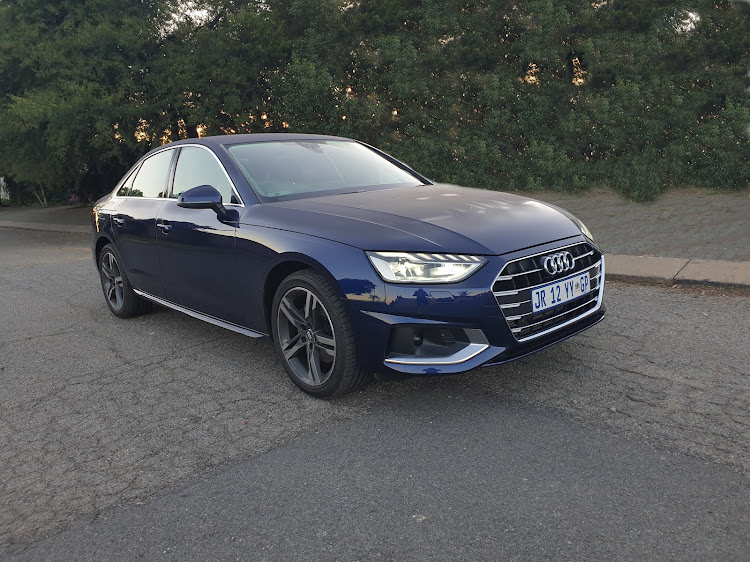 New A4 arrives with a facelift and mild-hybrid engines. Picture: DENIS DROPPA

The balance of power in the new-car playground has shifted dramatically in recent years, with formerly dominant sedans now getting their lunches stolen by crossovers and SUVs.

Audi’s A4 has been bullied particularly hard in the executive-car segment, and its sales have drastically dwindled as buyers move en masse to the brand’s higher-riding Q models.

The A4’s sales have also suffered due to it being five years old in a market that celebrates the latest and greatest, but the car is boxing back with a midlife update to keep it fresh in the face of the recently launched new-generation BMW 3 Series and the upcoming all-new Mercedes C-Class.

The upgrade includes a facelift, modernised infotainment system, and the introduction of engines with a fuel-saving mild-hybrid system (MHEV).

A new feature is Audi Connect, a connectivity hub that delivers internet services to the car via an embedded sim and used through the myAudi app. Among other functions the app includes a car finder, allows the vehicle to be remotely locked and unlocked, and provides a status report on information such as oil or fuel levels and service intervals.

These features are available through an embedded e-SIM and data is freely available for three years.

The A4 adopts a freshened look with a single-frame grille that’s now broader and flatter to make the car look more pressed down. LED headlights with daytime running lights now come standard across the range, and available optionally is the top-of-the-line Matrix LED headlight system with fully automatic high beam.

Inside, Audi’s ditched the old MMI rotary/push-button controller between the front seats; the infotainment’s now all controlled by touch on a large tablet-like screen, or by voice command. 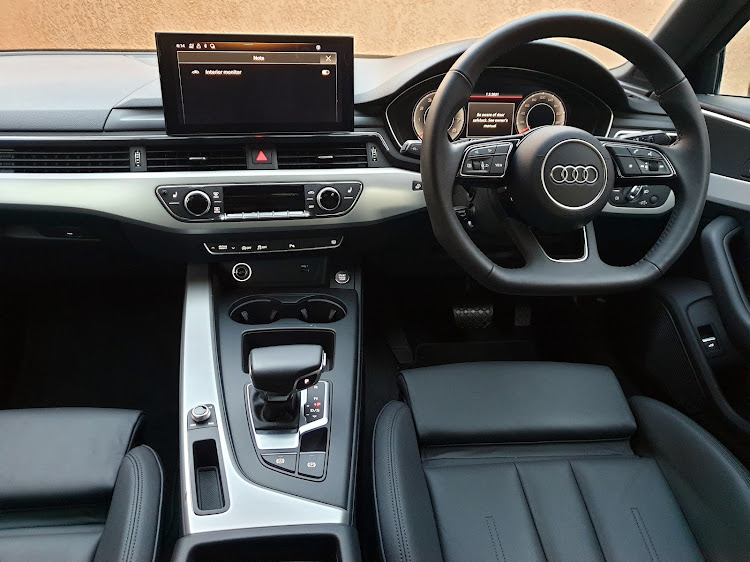 A new feature is Audi Connect, a connectivity hub that brings  internet services to the car via an embedded sim. Picture: DENIS DROPPA

The climate control, thankfully, is a separate system with physical buttons so you don’t have to dig through a digital menu to change the temperature. The infotainment’s relatively intuitive to use and the buttons have acoustic feedback, though I found the radio system unnecessarily complicated and it took some time to store a list of favourite stations.

The cabin has aged well in terms of Audi’s upmarket flair, with soft-touch materials and metal-finish climate control buttons providing classy décor. The interior styling doesn’t quite dazzle like Mercedes’ latest interiors but the A4’s digital instrument cluster (known as the Virtual Cockpit) and updated infotainment keeps the car on-point with the latest tech.

It’s a roomy sedan with space for four tall adults and 460l of luggage, with bulky items accommodated by flipping down the rear seats.

As usual most of the premium fare and cool toys cost extra, but that’s an industry trend and not something Audi can be singled out for. The R685,500 Audi A4 35 TFSI Advanced Stronic comes out of the box with the electrically controlled necessities, but the test car upped the ante with 170K worth of options.

Other extra-cost features included a premium Bang & premium sound system, wireless smartphone charging, and driver-assist features like adaptive cruise control and lane- change assist. Tally them up and your A4 costs R855K. 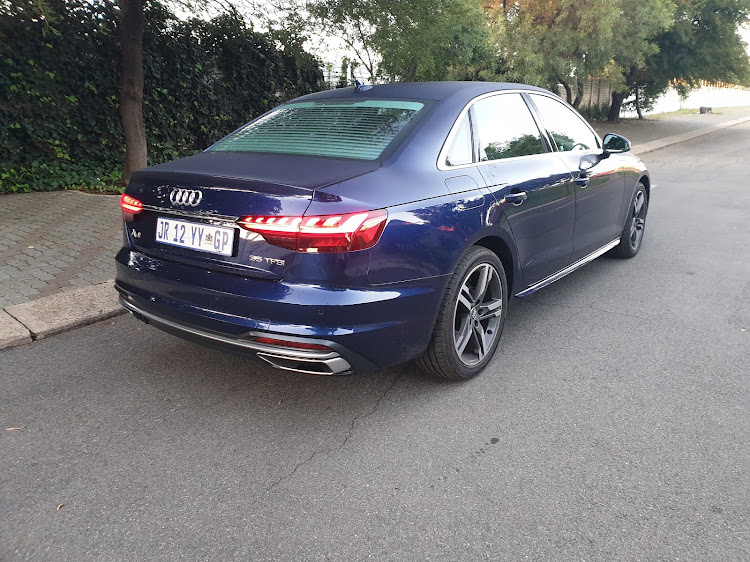 The 35 TFSI is the entry-level of the six-model A4 range and denotes 2.0l petrol turbo power with outputs of 110kW and 270Nm, sent to the front wheels via a seven-speed dual-clutch automatic. The next models up in the range is the petrol 40 TFSI with 140kW and 320Nm, while the fuel-sipping option is the diesel 35 TDI with 110kW/320Nm.

The new mild hybrid system reduces fuel consumption by up to 0.3l per 100km by allowing the car to coast with the engine switched off in certain conditions and using the 12V lithium-ion battery to power the car’s auxiliaries.

Our test car averaged 9.3l / 100km, about what we expect of a 2.0 petrol but much higher than the optimistic 6.1l claimed by Audi.

There’s little excitement on the menu but the 35 TFSI is an easy cruiser that revs freely once it shakes off some initial turbo lag. Driving the A4 is a refined and cocooned experience; harsh noises are filtered out and the car has a plush ride over unkempt roads.

When this A4 was launched in 2015 one of its biggest advances was weighing up to 120kg less than its predecessor despite being a larger car, and that’s evident in its light-footed feel. It’s a well-sorted ride-handling balance and the A4 carves corners very nimbly, even though there’s not enough power in the 35 TFSI to really challenge the chassis.

The Audi A4 range sold just 191 units in SA last year compared to 1,960 for the rival BMW 3 Series and 2,287 for the Mercedes-Benz C-Class. The disparity can partly be explained by the A4 being half a decade old whereas the C-Class underwent an upgrade in 2018 and an all-new 3-Series was launched in 2020.

The A4’s still an appealing package. It’s a polished car that has aged well, and now that the latest upgrade brings its modernity right up to date, perhaps it won’t trail its competitors so drastically in sales.

Midlife update keeps the A4 fresh

For budgets that fall below M car levels, this front-wheel-drive BMW hot hatch fits the bill
Life
9 months ago

Updated Audi RS models due in dealerships by March