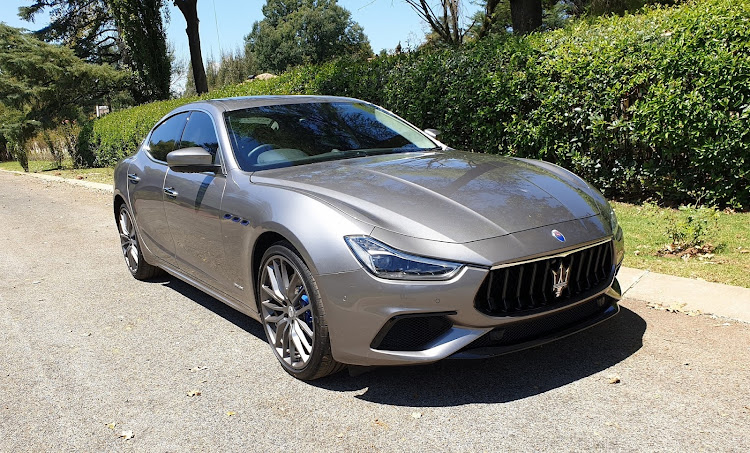 Maserati plugs into the electric era with its swift and silent Ghibli Hybrid. Picture: DENIS DROPPA

Stricter antipollution laws are forcing the motor industry to produce cleaner vehicles, which is a challenge for sports car firms that have built their reputations on powerful and charismatic petrol engines.

Maserati has entered the C02-reducing fray with its Ghibli Hybrid, the Italian brand’s first electrified model, with V6 and V8 versions of the sports sedan continuing to sell alongside this more planet friendly car.

The new Ghibli Hybrid is the first step in a plan that will lead to the electrification of all new Maseratis. The marque’s first all-electric cars will be the new Gran Turismo and GranCabrio, scheduled for 2022, and there will also be an electric version of the recently unveiled MC20 midengined supercar.

As the newest member of the eight-year old Ghibli range, the Ghibli Hybrid cuts CO2 emissions by 25% compared to the V6 diesel it replaces. It uses a mild hybrid power train that combines a 2.0l petrol turbo four-cylinder engine with a 48V alternator and an additional electric supercharger (e-Booster) supported by a battery.

The hybrid set-up recovers the kinetic energy the car accumulates when in motion, transforming it into electricity during deceleration and braking, and storing it in a battery.

The car is 80kg lighter than the outgoing diesel Ghibli but still weighs a hefty 1,950kg. That said, the DC converter and the 48V battery are mounted in the rear of the front-engined car to allow a better weight distribution and benefit driving agility.

As the entry version in the Ghibli line-up, the Hybrid has outputs of 246kW and 450Nm, yielding claimed performance figures of 0-100km/h in 5.7 seconds and a top speed of 255km/h. Drive is sent to the rear wheels via an eight-speed automatic transmission.

Subtly identifying it as an electrified Maserati are blue accents on the side air ducts, brake calipers and the Trident badge on the rear pillar. Inside, the same blue appears on the embroidered seams of the seats.

Hybrid models are also distinguished with a reworked front grille design, and redesigned taillights with a boomerang lighting signature inspired by the 3200 GT and Alfieri concept.

Inside, the 2021 Ghibli adopts a revamped infotainment system with a larger display. The infotainment is an improvement and the leather-bedecked cabin mostly sets an upmarket scene, though some of the switchgear feels plasticky and is not quite befitting a R1.6m car. 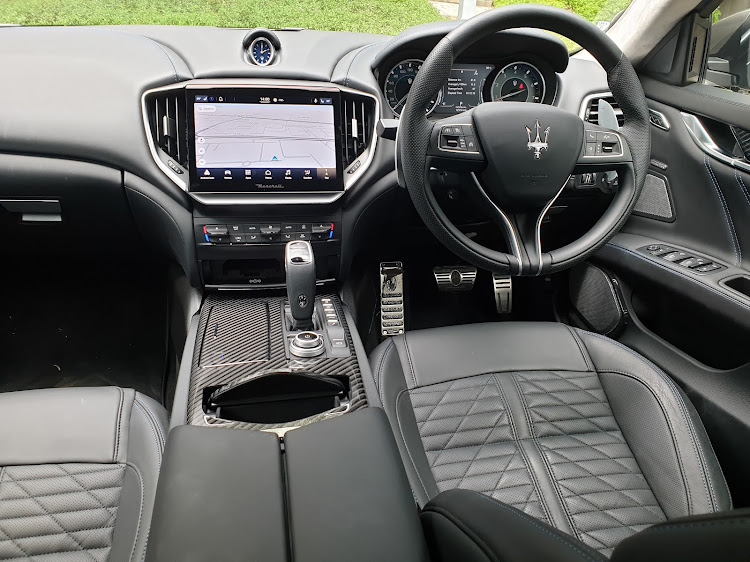 Maserati has endeavoured to give the Ghibli Hybrid a Maserati-typical sound with specially designed exhaust resonators, but there was little evidence of sporting acoustics when I drove the car in Joburg last week.

External observers might get more of an aural spectacle, but from inside the insulated cockpit the four-cylinder engine displayed sewing-machine smoothness and sound. It is only when making manual shifts at high rpm that a slight throat-clearing resonance can be heard.

Along with there being little sonic charm, in terms of performance this Maserati’s swift rather than scintillating. It won’t trouble most hot hatches in a street dice but, with maximum torque on call at just 1,500rpm, the big sedan picks up pace with a free-revving nature and cruises effortlessly. With a plush ride and relaxed ambience the roomy sedan whisks along in comfort.

As for the main raison d’être of a hybrid car, Maserati claims a consumption figure of 9.6l and the test vehicle returned 11.5l/100km on a route that comprised mostly open roads. That’s respectable if your primary reason for owning a Maserati is reducing your carbon footprint and fuel bill, but the challenge facing the Italian carmaker was to enter the world of electrification without altering the brand’s core philosophy.

They’ve come up with an emotionally neutered car that lacks the charisma of its more full-voiced V6 and V8 stablemates. This environmentally friendlier Maserati is swift, silent and sanitised. It doesn’t make your skin tingle, as one might expect from an Italian sports sedan.

Italy’s rapid new hellraiser has arrived, and we got to drive one of the first units in SA
Life
1 year ago