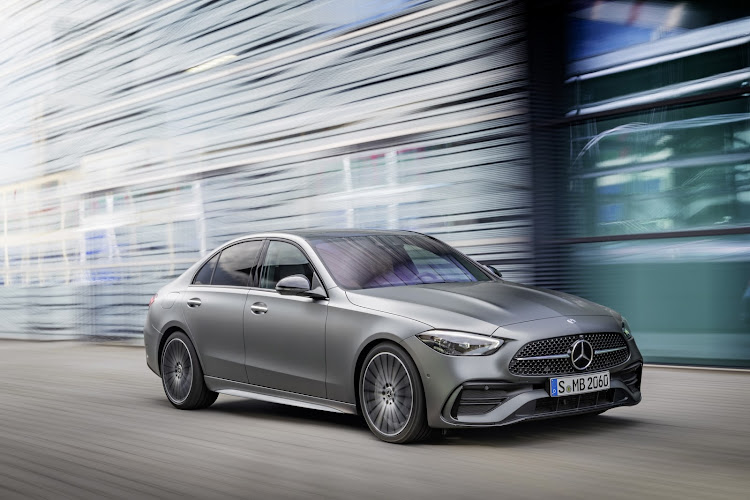 The new C-Class will be built in SA and go on local sale later this year. Picture: SUPPLIED

The all-new fifth-generation Mercedes-Benz C-Class had its global premiere on Tuesday and, as expected, much of the technology of the recently-launched S-Class has filtered down into the brand’s midsized sedan.

Replacing the W205 C-Class that has been around since 2014, the new W206 is the latest generation of Mercedes’ best-selling model range, with about 10.5-million units sold to date (including the 190E that preceded the C-Class in 1982).

The C-Class sedan will be launched in SA later this year and will again be produced locally by Mercedes-Benz SA after a R10bn investment in the East London plant. Tuesday’s world premiere also introduced the new-generation C-Class estate, though it’s unlikely for our shores given the local market aversion to station wagons.

Many intelligent driving assistance systems come from the S-Class, including rear-wheel steering, and the C-Class has taken another major step forward with respect to digitisation and high quality.

“The letters C and S sit at opposite ends of the alphabet. However, in our portfolio they’re now moving closer together,” says Ola Källenius, CEO of Daimler AG and Mercedes-Benz AG.

“The C-Class is already our best-selling saloon. Still, I’m certain our new C-Class will excite even more customers with a wide range of hi-tech features derived from our flagship S-Class.”

These features include the second-generation MBUX (Mercedes-Benz User Experience) system with an enhanced “Hey Mercedes” voice assistant. Behind the steering wheel is a high resolution digital instrument panel available in two sizes — 26cm or 31.2 cm. In the centre of the dash is a giant digital floating display that’s angled towards the driver, and it too is available in an even bigger size. 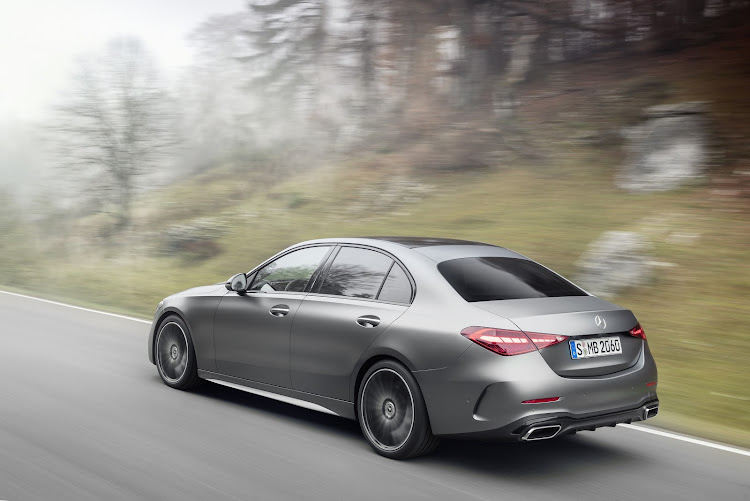 The C-Class engine range will be electrified throughout. Picture: SUPPLIED

With the "Online Music" service, Mercedes-Benz has fully integrated the major music streaming services into the MBUX infotainment system.

At 4,751mm the car’s grown 65mm in length, and it’s also expanded 25mm in wheelbase and 10mm in width to improve leg and elbow room inside the cabin. Luggage capacity remains at 455l.

Under the enlarged body is a more luxurious interior than ever, featuring high quality materials, ambient lighting and aviation-inspired air vents.

Other cutting edge tech from the S-Class includes navigation with augmented video, and digital lights which are able to project guidelines, symbols and animations onto the road.

For the first time in the segment, the car offers optional rear-axle steering for improved agility and stability in all driving conditions. At low speeds it reduces the turning circle by more than 40cm to make life easier in parking lots, and at higher speeds it effectively lengthens the wheelbase for better directional stability.

The C-Class will offer the choice of rear-wheel or all-wheel drive as before, and will be electrified throughout. All engines have a 48V integrated starter generator to enable functions such as gliding, boosting or energy recovery, which makes significant fuel savings possible.

Petrol and diesel plug-in hybrids will follow soon, providing 100km of electric range on an electric power output of 95kW, and with the battery able to be fully charged in 30 minutes.

All versions of the C-Class are 9G-Tronic automatics, and manuals have been consigned to history. 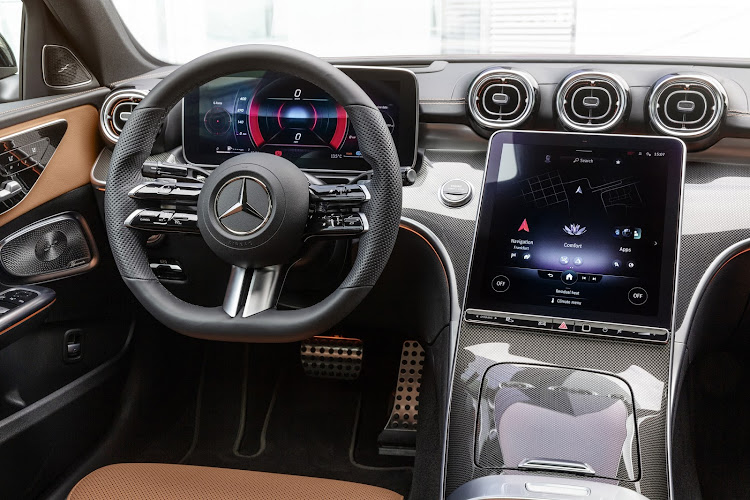 Under the enlarged body is a more luxurious and digitised interior. Picture: SUPPLIED

It’s rumoured that when the high-performance AMG C63 joins the range at a later date, it will be the first in a number of new AMG models to swap V8 power for four cylinders. This downsized hybrid C63 will reportedly have a more powerful, electrified version of the turbocharged 2.0l engine that serves duty in the 310kW Mercedes-AMG A45 S.

From the front the new C-Class hasn’t made any great styling leap over its predecessor. The lights are a little slimmer and the grille has been inverted (it’s now wider at the bottom than the top). The windscreen and passenger cell have been moved to the rear for a "cab-backward design". The rear has undergone a more noticeable restyle, with the formerly ovaloid lights now more horizontally elongated.

“With the new C-Class, Mercedes-Benz is setting off into a more efficient and even more digital world, creating an all-round future-proof comfort zone — a refuge that combines apparent opposites, such as sportiness and comfort with efficiency, emotion, and intelligence, thus defining modern luxury,” says Mercedes-Benz.

But like pineapple on pizza, this sports car on stilts won’t make sense to everyone
Life
2 months ago

The key to the S-Class has always been seamless luxury, and that’s what the new version delivers
Life
4 months ago
Next Article