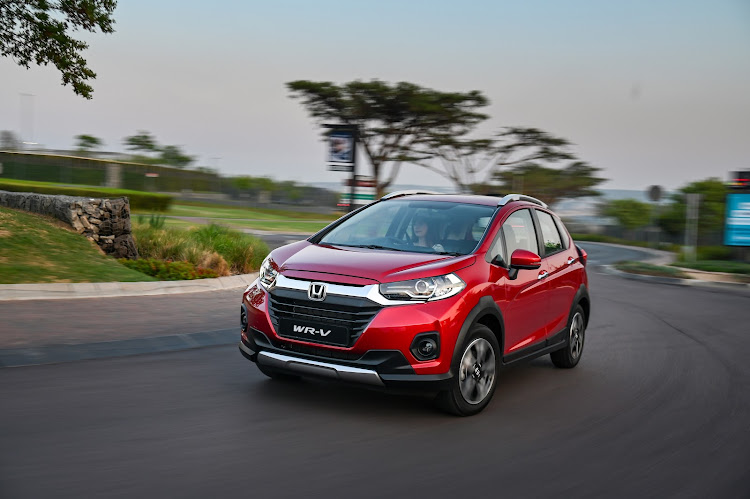 The Honda WR-V has a raised ground cleance and SUV-style looks. Picture: SUPPLIED

Honda has entered SA’s junior SUV wars with the new WR-V, a crossover based on the Jazz hatchback.

With a raised ground clearance and an SUV-style body makeover, the WR-V is the latest vehicle to take on the segment-leading Ford EcoSport following cars such as the recently introduced Hyundai Venue and Volkswagen T-Cross.

The entry SUV sector is the fastest growing and most competitive of the market, says Yuishi Fukuda, president of Honda Motor Southern Africa. Comprising almost 18% of SA’s new passenger car market, the segment consists of just more than 50,000 units a year and has grown 39% year on year by the end of 2019.

Imported from India, the WR-V arrives in two variants — Comfort and Elegance — both powered by a 1.2l normally aspirated petrol engine paired with five-speed manual transmissions.

The car is clothed in the requisite accoutrements of an urban crossover vehicle, including front and rear plastic skid plates, roof rails, and emphasised wheel arches to give it an SUV-like look. 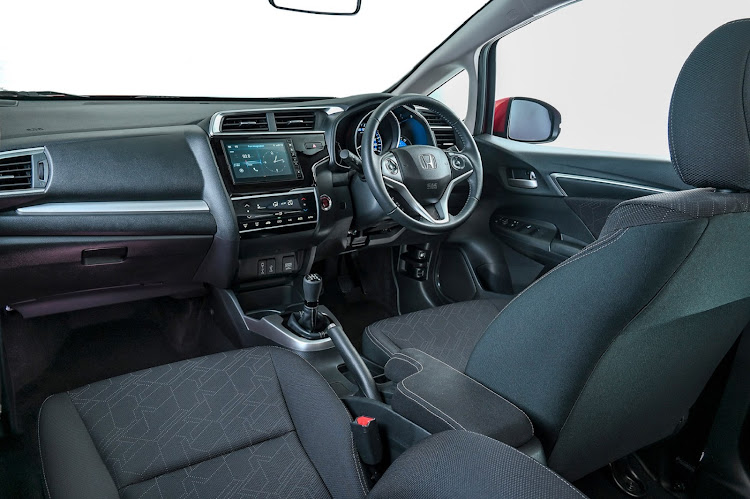 The small Honda is impressively roomy inside and has a Magic Seat system to accommodate bulky cargo. Picture: SUPPLIED

It is a front-wheel-drive car with no off-roading ambitions, but has a 173mm ground clearance compared with the 135mm of the Jazz, along with sensible high-profile tyres for a smoother ride on rough tar or gravel.

There is no stability control to lessen the chance of slides on slippery roads however. It gives this Honda a disadvantage against its above-mentioned rivals which all have this safety feature, though the WR-V does come standard with ABS brakes and six airbags.

The basic Comfort version has features such as remote central locking, automatic air con, electric windows and mirrors, rear parking sensors, and a basic audio system with Bluetooth. But you’ll have to buy the more expensive Elegance to get a modern touchscreen system with Apple CarPlay and Android Auto.

The dashboard has hard plastics instead of the richer-feeling soft-touch material, but the cabin is neatly put together and doesn’t come across as overtly cheap. For a small car of just under 4m in length the WR-V is impressively spacious, and four rugby-sized adults will fit inside without any contortion.

With outputs of 66kW and 110Nm the normally aspirated WR-V is the least powerful car in a segment dominated by turbocharged rivals, and Honda has no plans to introduce a more powerful version.

The sea level performance isn’t too bad. At the Cape Town launch the Honda felt adequately peppy in the urban environment and was able to cruise open roads at the national speed limit, but it lacks overtaking hustle and passing moves require careful planning.

The car handles neatly and isn’t beset with too much body roll despite its raised ride height. It rides fairly comfortably too though the short car can feel choppy on unkempt surfaces.

The WR-V is the only segment car without towing capability — a factor common to all India-built Hondas, though it partially makes up for this with its Magic Seat folding system which allows a number of cargo-swallowing configurations. This feature, first introduced a few years back in the Jazz, includes a Tall Mode to accommodate upright objects, for instance two mountain bikes with their front wheels removed.

Total boot space is among the best in the segment, at 363l expanding to 881l with the rear seats folded.

The starter SUV is refined, hip and bearable to live with, says Phuti Mpyane
Life
1 year ago

Essentially a Figo hatchback on stilts, the Freestyle rides higher and has SUV-like styling
Life
10 months ago
Next Article

1.
Mbalula extends driver’s licence grace period to ...
Life / Motoring
2.
Atomic superyacht: a floating platform to ...
Life
3.
Devlin Brown at the water cooler: Can I use a DNA ...
Life
4.
How a gung-ho pro cyclist learned to relax and ...
Life
5.
Five of the most fuel-efficient SUVs
Life / Motoring

1.
Mbalula extends driver’s licence grace period to ...
Life / Motoring
2.
Atomic superyacht: a floating platform to ...
Life
3.
Devlin Brown at the water cooler: Can I use a DNA ...
Life
4.
How a gung-ho pro cyclist learned to relax and ...
Life
5.
Five of the most fuel-efficient SUVs
Life / Motoring