New Hummer is all-electric and designed to tackle the roughest terrain. Picture: SUPPLIED

Hummer, the brand that became synonymous with fuel-guzzling excess, has been reinvented as a planet-friendly electric vehicle.

General Motors this week unveiled the Hummer EV pickup, the first fully electric addition to its line up. But though it doesn’t guzzle a drop of fuel, the excess is still there in the form of an electric powertrain that pushes out astonishing outputs of 750kW and 15,590Nm. That torque figure is not a typo, and it’s generated by three electric motors, which put the power down through all-wheel drive.

“We had one goal for Hummer EV: build the most capable factory truck, ever,” said Al Oppenheiser, GMC Hummer EV chief engineer. “It’s an absolute off-road beast with a unique e4WD drive system that provides manoeuvrability unlike anything GM has ever offered before.”

“This innovative truck comes to market with speed and purpose, bringing GM another step closer to an all-electric future,” said Mark Reuss, president of GM.

It has been designed as a go-anywhere vehicle and its off-road credentials include four-wheel steer with CrawWalk1, which allows the rear wheels and front wheels to steer at the same angle at low speeds, enabling diagonal movement of the vehicle, for even greater manoeuvrability on challenging terrain. 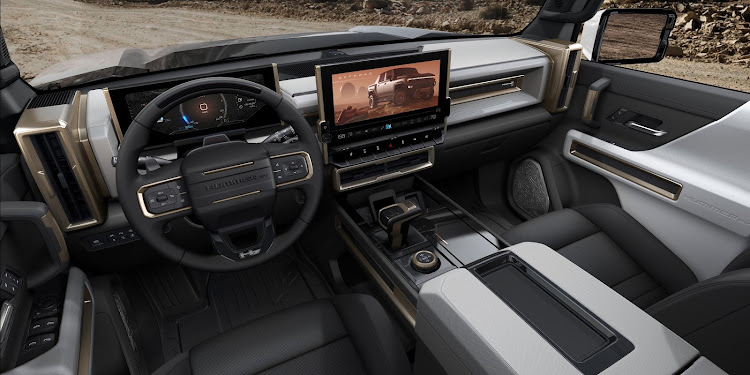 The luxurious cabin of the new Hummer EV. Picture: SUPPLIED

GM claims a driving range of up to 563km on a full battery charge, and using a DC fast charger the vehicle can be charged up to 160km of range in 10 minutes.

Production of the Hummer EV begins in late 2021 at GM’s Detroit factory. It is unlikely to be offered in SA following GM’s exit from the country in 2017.

The brand is being revived after being retired in 2010 during GM’s bankruptcy proceedings. The original Hummer H1 was based on the military Humvee, and followed up by the smaller H2 and H3, the latter being built and sold in SA in the mid 2000s.

Lamborghini Urus: A bull for all seasons and conditions