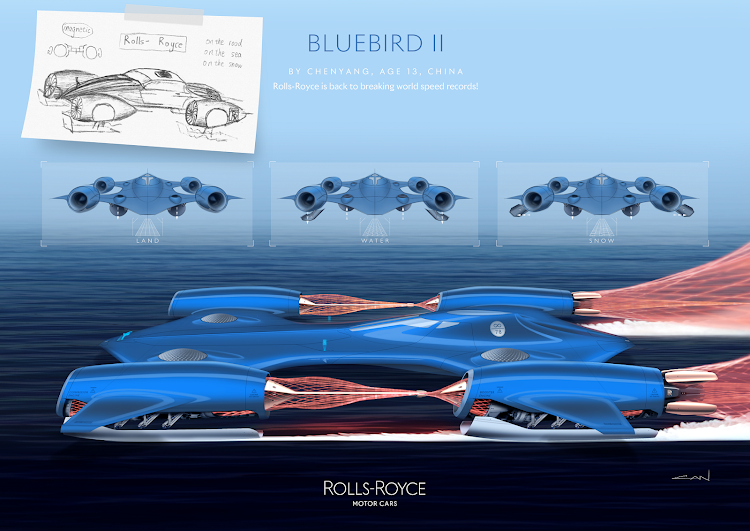 Showing little regard for the stiff upper lip image of the subject matter, children around the world were inspired by everything from Pablo Picasso to unicorns in designing Rolls-Royces of the future.

They were competing in this year’s Young Designer Competition hosted by Rolls-Royce Motor Cars, which has announced the winners.

The four category winners, who hail from Japan, France, China and Hungary and range in age from six to 16, will each enjoy a chauffeur-driven journey with their best friend in a Rolls-Royce to school.

The designs of the winners and three additional Highly Commended entrants have all been transformed into digitally-rendered illustrations by the Rolls-Royce Design Team.

Devised to provide a creative outlet for children aged 16 and under, confined by Covid-19 lockdown restrictions, the competition attracted more than 5,000 entries from more than 80 countries.

Asked only to design their "dream Rolls-Royce of the future", children were able to let their imagination run free, creating designs of extraordinary richness, creativity and diversity, says Rolls-Royce.

Many are capable of flying or travelling underwater; the designs also featured a host of clever devices and novel technologies to save labour, provide pleasure and entertainment and benefit humanity and the environment.

Reflecting on the competition, Torsten Müller-Ötvös, CEO, Rolls-Royce Motor Cars, said, “I would like to thank every single Young Designer who entered the competition, and for all the thought, hard work and creativity that went into their designs. There is some amazing talent out there, and I wouldn’t be surprised if some of our entrants went on to work as car designers one day — perhaps even at Rolls-Royce."

He concluded: “The most important thing I’ve learned from this competition is that whatever our circumstances, we have the power to create amazing things, because our imagination is always free to fly.”

The Ghost is all about less-is-more luxury

Welcome to the most expensive game of puzzles in the world, found inside a new Rolls-Royce
Life
9 months ago
Next Article