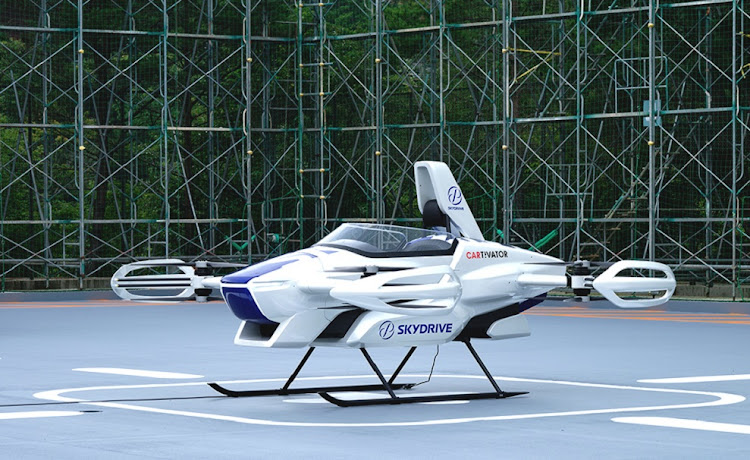 It looks like the famous Jetson’s family of the eponymous 1960s US animated sitcom wasn’t far off the mark as the flying craft industry picks up momentum. Picture: SUPPLIED

A Toyota-backed Japanese start-up, SkyDrive, has demonstrated a new prototype of a small flying craft.

The trial product code-named SD-03 is essentially a manned drone large enough to accommodate the pilot only, but the group of engineers say a two-seat derivative is in development, with plans of creating a flying taxi business out of the concept.

It’s reported that the SD-03 hovered off the ground and maintained flight for four minutes at a Japanese test site on its first manned flight.

The makers of the fully electric craft that uses eight rotors say it’s capable of a 10-minute flight with vertical take-off and landing. It also takes up the space of two parked cars, opening up opportunities for short commercial flights around busy cities, says SkyDrive CEO Tomohiro Fukuzawa.

The company hopes to launch the fully functional single-seat range by 2023 but does admit this could be too ambitious. SkyDrive is also looking to make the flying taxi service functional and autonomous by 2030, while they seek approval from regulators to open up more test locations as they are currently limited to the Toyota test site.

Personal flight is becoming a reality and it’s also reported that Toyota has invested more than $400m in another company, Joby Aviation, that builds people-carrying drones. Other vehicle brands, such as Hyundai, Porsche and Daimler are currently busy with flying cars for the new world.

Flying motorbike takes to the skies

Volvo takes on the airlines

What if you could take your own first-class private cabin that picks you up at home and takes you from door to door?
Life
2 years ago
Next Article