The 350km/h Mercedes-AMG One nears completion

The F1-inspired, R47m supercar will soon be tested at the Nurburgring 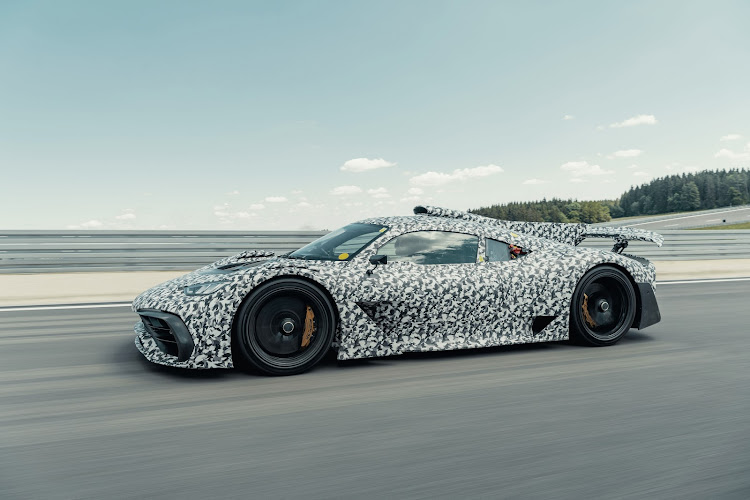 Only 275 units of the R47m hyper car will be made. Picture: SUPPLIED

Though Mercedes-Benz is dominating the Formula One scene, making an F1 car for the road is no easy task, it seems.

The Mercedes-AMG One hyper car has had an unusually long development period, having first been unveiled in 2017, but now several prototypes are undergoing dynamic testing including a planned stint at the Nurburgring Nordschleife, before the ultimate Mercedes is launched as a production model in 2021.

The plug-in hybrid sports car will be made in a limited series of 275 units, all of them already sold at a price of $2.72m (R47m), but the new owners have had to wait while Mercedes-AMG engineers adapt a complete Formula 1 drive unit for a hyper car with road approval. Instilling the pinnacle Mercedes sports car with a blend of impressive driving dynamics and everyday usability, combined with the ability to drive in all-electric mode, has been a tremendous challenge.

Certain aspects, such as noise levels, required the development team to venture into uncharted territory to find solutions that could be developed to series maturity, says Mercedes.

Several pre-production models are now practising their fast laps at the company’s proving ground and technology centre at Immendingen, Germany. For the first time, the F1-derived hybrid petrol-electric power unit with its full output of more than 735kW is being tested.

Along with the dynamic test programme and some refinements to the car’s driveability, development work is also focused on its active aerodynamics. The complex interplay between the various active components, such as the louvres, air outlets in the front fenders and the large rear aerofoil, is now confirming its effectiveness outside the wind tunnel.

In conjunction with the dynamic testing, various vehicle systems are being put through their paces on the simulator at Mercedes-AMG’s base in Affalterbach.

The German carmaker says the car’s name stands for the highest automotive ambition: to bring undiluted Formula One technology to the road. The all-wheel-drive car combines a rear mid-mounted F1-derived 1.6l V6 turbo engine, which revs to an astounding 11,000rpm, and four electric motors.

It’s capable of 0-200km/h in under six seconds, says Mercedes-AMG, with a top speed in excess of 350km/h. A lightweight carbon-fibre monocoque chassis rides on adjustable pushrod suspension, and the car has active aerodynamics in the form of a two-stage extendable rear wing for maximum downforce.

The next step is to take the Mercedes-AMG One to the ultimate testing ground, the north loop of the Nürburgring, to see how its lap times fare against other supercars.

How Mercedes-AMG earned its sporting stripes

From sports cars to powerboats and explosive door hinges, the AMG world is full of surprises
Life
1 year ago
Next Article