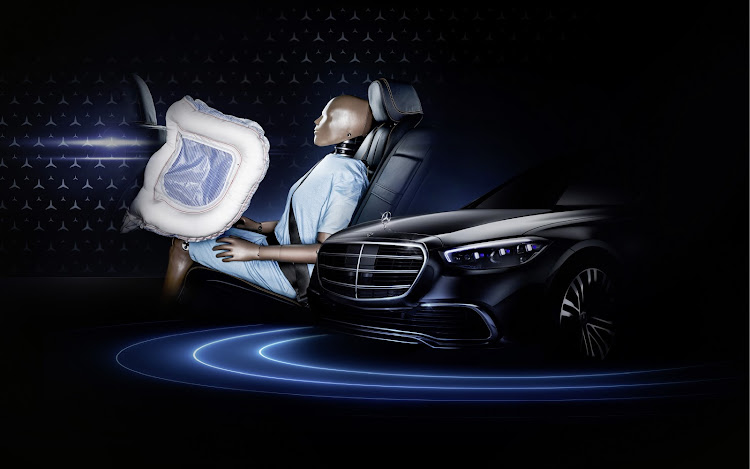 Airbags mounted in the front seats will protect back seat passengers in frontal impacts. Picture: SUPPLIED

Mercedes-Benz has been drip-feeding information about its upcoming new S-Class which is being unveiled in September, and the latest disclosure is that it will be the world’s first car with frontal airbags for rear passengers.

Many cars have side and curtain airbags in the rear doors, but this will be the first time back seat passengers will be protected in the event of a frontal impact, by means of airbags mounted in the front seats..

It calls for a different concept to that of front airbags, says Mercedes-Benz, as the airbags must be able to adapt to child seats. Combined with a Belt Bag inflatable safety belt, the S-Class luxury sedan is setting new benchmarks in safety for rear-seat passengers, says the German carmaker.

Another safety improvement is the expansion of the Pre-Safe Impulse Side function which uses radar sensors to identify an imminent side impact. It protects the occupants not only by using air cushions in the seats to move the driver or front-seat passenger towards the centre of the vehicle, but also by simultaneously raising the vehicle using the E-Active Body Control suspension.

This body-raising safety system essentially "braces" the car to better withstand a side impact. It's similar to the system used in the rival Audi A8, and diverts more of the crash impact through the car’s stiff lower sill which is stronger than the doors.

Over the years the S-Class has ushered in a number of safety innovations that have gone on to become standard fare in most cars, including the ABS antilock braking system introduced in the W116 in 1978, the airbag that premiered in the W126 in 1981, and the ESP (Electronic Stability Program) in the 140 model series of 1995 which introduced this traction-enhancing safety measure to a worldwide audience for the first time.

Mercedes-Benz recently announced that the all-new S-Class (internally dubbed the W223) will feature a highly digitised cabin with up to five touchscreens and a 3D driver display.

The new luxury sedan will be even more focused on rear seat passengers than its W222 predecessor, given that many S-Class owners tend to be chauffeur driven.

This is the second of a three-part teaser campaign for the new S-Class ahead of its world premiere in September. The final part on August 12 will focus on the luxurious interior.

Arriving in September, Benz's top luxury sedan will have up to five screens and a 3D driver display
Life
11 months ago

With outputs of 537kW, this two-seater is the most powerful production Benz yet
Life
11 months ago

New Audi A7 is a silky smooth operator

Swift but silent, this stylish gran turismo is a sporty executive with dash of unconventionality
Life
11 months ago
Next Article