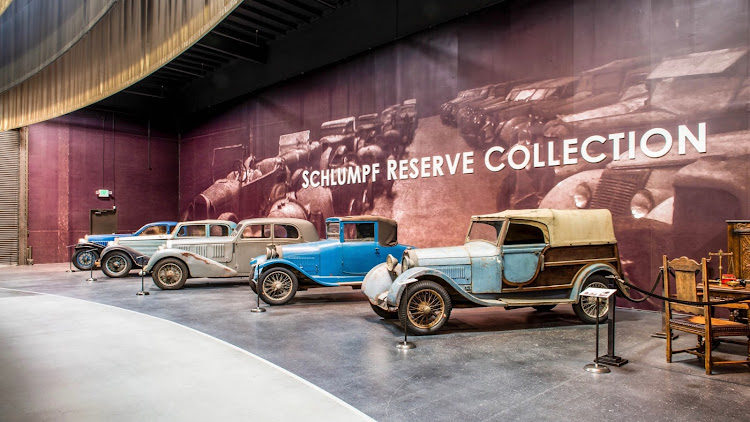 Some of the Schlumpf Bugatti collection can be seen at Cité de l'Automobile museum Mulhouse, Alsace. Picture: SUPPLIED

Some people may be happy with just one Bugatti, others collect over 100 of them.

The Schlumpf brothers, Hans and Fritz, were Swiss textile merchants in France during the 1930s. Where Hans is described as the financial mind of the pair, Fritz was more entrepreneurial, flamboyant and a racing car enthusiast with a penchant for Bugattis. Fritz also had a wish to own the largest Bugatti collection in the world.

Soon enough they had amassed a fortune and Fritz, who’d bought his first Bugatti by 1928, had acquired a number of classic cars. By 1961 he was the leading Bugatti collector in the area.

His bold plan to have the world’s biggest Bugatti collection began with writing to Bugatti owners all over the world with the aim of buying their cars. Among the collectors listed in an address registry kept by the British Bugatti Owners Club that he used was American John W Shakespeare, who at the time owned 30 Bugattis, and which was the largest known personal collection of Bugattis in the world stashed near his home in Hoffman, Illinois.

Shakespeare’s collection, which he assembled from the 1950s, included his first car, a 1932 Bugatti Type 55; a Type 41 Royale Park Ward, which was the third and last customer car, 12 Type 57, three Type 55, and Ettore Bugatti's personal electric car Type 56 dating back to 1931.

Schlumpf initially offered $70,000 for the entire fleet which was in a mostly dilapidated state and the gentlemen agreed on a final $80,000 offer after two years of negotiations with the 30 cars finally shipped to France in March 1964.

By 1967, an inventory showed 105 Bugattis in the Fritz Schlumpf collection and the idea of a museum was born, but it was never opened.

The French textile industry declined and labour strikes eventually drove the Schlumpf brothers into bankruptcy and to move back to Switzerland in the 1970s. Workers discovered the hidden cache of Bugattis in 1977.

Today, the cars are displayed at the Cité de l'Automobile in Alsace, France, which is a national museum in Mulhouse that comprises 400 of the world’s rarest, most valuable cars.

Fortuner strips away some models to reveal the Epic

Fortuner strips away some models to reveal the Epic