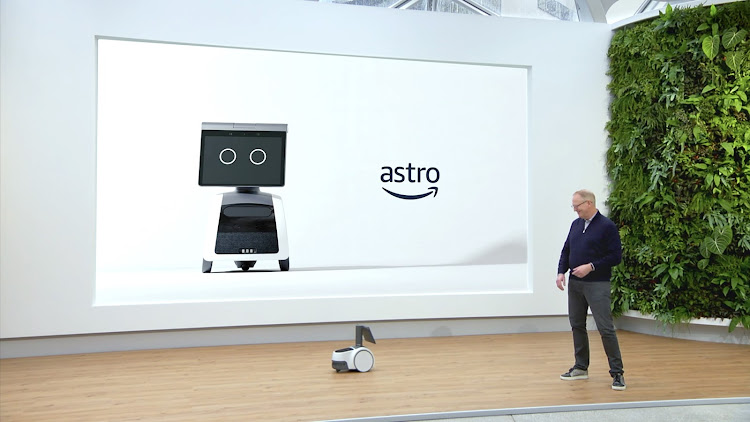 Amazon on Tuesday unveiled a home robot called Astro, a screen on wheels that works with the company’s Alexa voice software.

The bot, which Bloomberg first reported was in development in 2018, was shown at an Amazon product event on Tuesday checking on pets while a user was away and following a child through the home during a video call. It can autonomously patrol the home and respond to voice commands, and will cost $1,000 for invited shoppers later in 2021.

The device’s screen, which by default displays a pair of circles to imitate eyes, is capable of travelling about a metre a second. Embedded cameras help the robot map its environment and navigate, and Astro also includes a periscope to expand its field of view.

“Customers don’t just want Alexa on wheels,” said Dave Limp, Amazon’s devices and services chief. “We’ve embodied it with a unique persona that’s all its own.”

Limp said the robot is part of an Amazon programme that makes devices still under development available. Astro will be sold on an invitation-only basis at an introductory price of $1,000. After that, it will cost $1,500, the company said.

The Seattle-based company has come a long way as a hardware player since a failed foray into smartphones a few years ago. Amazon has built a vast electronics business around its voice-controlled Echo smart speakers and accompanying Alexa software. Amazon has held new product unveilings in each of the last several years, an effort to position itself at the centre of the burgeoning market for smart-home gadgets.

The company doesn’t release financial or operational results from its devices and services group, but Euromonitor International estimates Amazon’s gadget line is the third-best-selling brand in the US by unit sales, trailing only Apple and Samsung.

The vast majority of the products, however, are relatively inexpensive gizmos such as Fire TV streaming sticks or miniature Echo speakers. In Astro, Amazon, a company with a reputation for scrappy and utilitarian hardware, has set up its biggest test to date: selling a premium product with an eye-watering price tag.

Several of Amazon’s other updates announced on Tuesday, from professional monitoring of Ring video cameras to an elder care application and new voices for Alexa, were geared towards adding paid or subscription services to Amazon’s popular products.

The latest products and services include:

Amazon’s devices unit has been a frequent target of criticism, from privacy advocates who question the wisdom of always-on microphones in the home, and civil liberties groups alarmed by Ring’s partnerships with police departments and security practices. Those doubts haven’t derailed Amazon’s sales.

Meanwhile, the company has worked to burnish its privacy credentials, offering Alexa users more granular options to delete voice recordings captured by Amazon devices, encrypting videos picked up by Ring and asking police departments to publicly request footage they want for investigations. An update announced on Tuesday and coming to some Echo devices will enable processing of user commands on the device itself, removing the need to transmit that data to Amazon’s servers.

Amazon announced early in September its first line of televisions, as well as an update to its Kindle e-reader line. Bloomberg News reported last week that Amazon was working on a larger Echo with a wall-mountable screen, a TV sound bar and more advanced smart-speaker technology for use in cars. The company has also considered developing an Alexa-powered wearable device for children.

In a video accompanying Amazon’s presentation, devices executive Charlie Tritschler described the impetus to start developing the Astro robot. “In one of the senior management meetings, we talked about, ‘Does anybody in the room think that in five, 10 years, you’re not going to have robots in your home?’” Tritschler said. “And everybody’s like ‘Yeah, we are.’ So we said, ‘Well, let’s get started.’”

Added Gregg Zehr, president of Lab126, Amazon’s skunkworks hardware unit: “This is our first robot, not our last robot.”

Platform throws down the gauntlet against the likes of Netflix, Apple TV+ and Amazon Prime Video
Life
9 months ago

Wanted Online: Louis Vuitton’s iconic trunk from the 1850s, gets a breath of ...

Step into the sunshine with Courvoisier Cognac this summer

Wanted Online: Louis Vuitton’s iconic trunk from the 1850s, gets a breath of ...

Step into the sunshine with Courvoisier Cognac this summer