In contrast to the growth industry of “art fairs” where money rings up reputation, the raison d’être of art biennials is more or less to showcase the state of creativeness in that industry.

Taking in two over a week or so — the veritable Venice Biennale (as it is known, also the oldest in its 58th edition) and the dynamic Istanbul Biennial (the 16th) — gives a good idea of where the art world’s head is at right now (when it is not just about the money).

As is fashionable these days, biennials are titled with enigmatic slogans: in Italy’s fantastic lagoon city it reads “May You Live in Interesting Times”. Turkey’s goes for “The Seventh Continent”, referencing the environmentally-disastrous pile of plastic floating in the Pacific Ocean.

The latter is curated by the 54-year-old French critic Nicolas Bourriaud, known for his thoughtful opinions on art. The other was in the hands of the 62-year-old New Yorker Ralph Rugoff, an acclaimed exhibition maker.

The contrast between the two — Istanbul has free entry, Venice costs a cool €35 for a day’s entry — also demonstrates that the visual arts can pull different contemporary punches under focused curatorship. And, for the slightly more sceptical SA visitor, the choice, inclusion and presence of our artists on these international stages send out a rather fuzzy message about the what and who in our creative country.

To start with the latter: choice and curators (oh, that so overweighed title) will always be subject to hot debate in the delicate art world. Yet visitors may well feel a little underwhelmed, even confused, by the five SA artists in the Venice halls, while the solo selection of Johannesburg-based Turiya Magadlela in Istanbul adds a distinct African feminist note to that biennial’s vibrant didactic clout.

Chosen by the Istanbul curator, Magadlela’s installation of pantyhose and performance piece with sewing machine titled S’Maidical have something of a presence battle with the rest of the huge exhibition that takes up five floors of the new MSFAU Istanbul Painting and Sculpture Museum. Among a variety of art that ranges from multiple video screens, bold, whole-room set-ups to small drawings, visitors may miss the whiff of humour that accompanies her “tapestries of tights”.

It takes more than three hours to just walk the MSFAU show, which comprises work by some 40 of the 56 invited artists. A number of those stop-you-in-your-tracks pieces show that contemporary artists can make powerful, inventive art reflecting the current global environment and social crises.

In the tradition of the Istanbul biennial, Turkish artists are not shy to tackle vital local topics. The country’s building boom, destroying natural environment, piling up concrete, polluting the air, come up in different ways, including Ozan Atalan’s installation of a real threatened water buffalo skeleton and Denis Aktas’s powerful drawing of an endless pile of tyres titled The Ruins of Hope. 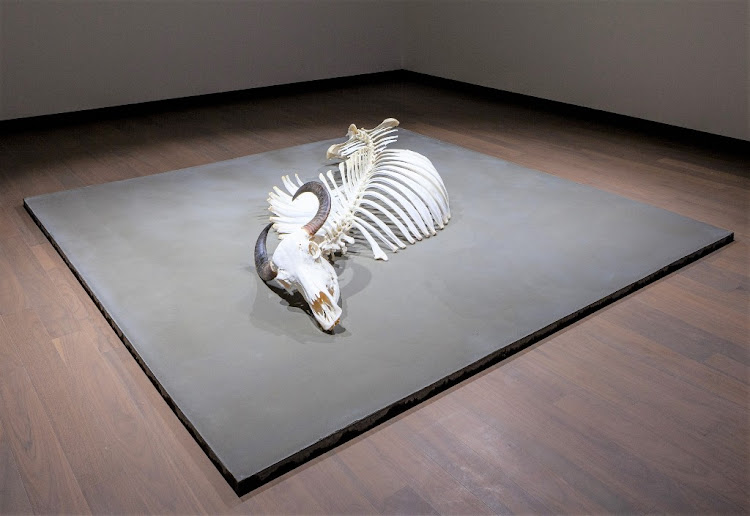 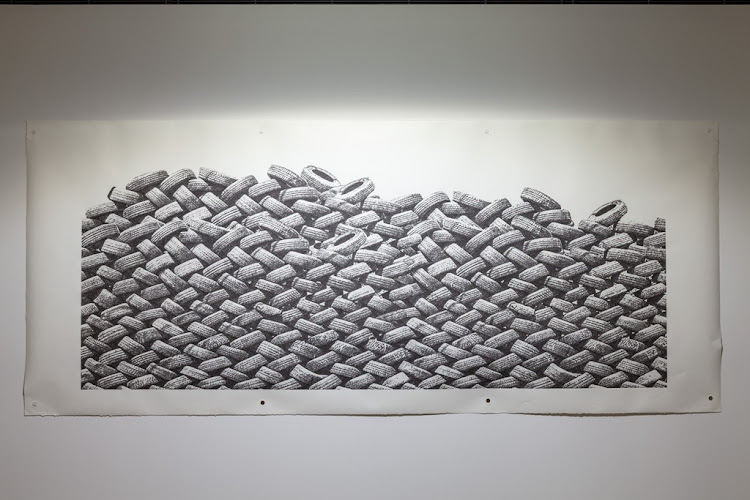 Ironically, the museum building, making its debut as an art venue, sits next to a site that is under construction.

The Istanbul biennial made a last-minute shift to this space because the renovated shipyard warehouse originally selected has not been cleared of asbestos. Another exhibition space is the Pera Museum up the hill, while old mansions on the island of Büyükada is also used for atmospheric installations.

If you thought that art simply equates beauty, the Turkish biennial suggests that there is more urgency to creative messaging and artists can muster strong, well-modulated voices to confront the serious issues that define our critical time. With nuance and imagination this is art that really delivers a kick to the conscience.

Not that there is no beauty to be found in this sprawling art event.

A highlight of the biennial may well be the drawings by Ernst Haeckel on view at the Pera Museum. The entrancing irony of these exquisitely-detailed, century-old illustrations of “Artforms in Nature” by Haeckel, a German sociologist-scientist who died in 1919, is powerfully embedded in their fairytale-like aesthetic.

The drawings by Ernst Haeckel on view at the Pera Museum. Picture: SUPPLIED

If this is craftsmanship of a different era, pertinently applicable to our time, it is the exquisite finishes, design, wit and on-target sculptures by the 77-year-old Martin Puryear in the US pavilion in Venice’s Giardini that lingers in one’s mind.

Contemporary US politics, racism and environment matters are captured in elegant pieces mostly crafted from indigenous woods that tease viewers with ritual playfulness and mystery. The gorgeous Swallowed Sun (Monstrance and Volute) outside invites you into various  thought-provoking sculptural curiosities, including New Voortrekker wagon-on-a-slope, towing its special nuances for South Africans.

The official SA artistic presence in Venice, now a sensible renovated space adjacent to the endless Arsenale that houses the largest chunk of the selected biennale art, is somewhat of a muted affair.

And one cannot but wonder whether the hapless manner in which the official department responsible has been dealing with this over the past few years has resulted in this lacklustre, oh-so-self-aware three-person installation. (Exactly what do curators do these days?)

Far stronger are the giant poster pictures of Zanele Muholi in her Somnyama Ngonyama, Hail the Dark Lioness series spread around the Arsenale’s enormous gritty exhibition halls housing some 70 invited artists. Her piercing visages may just remind visitors that, indeed we live in interesting times of shifting identities and uncertain politics. All is not what it seems.

In the biennale’s main exhibition venue in the Venice Giardini that unsettling attribute of today’s art plays out, as is custom now, in a wide variety of media. Ranging from Carol Bove’s gorgeously wacky, playful sculptures to the Nigerian-born painter Njideka Akunyili Crosby’s engaging large canvases and all kinds of video and sculpture.

In the rest of the garden, where the “big-name countries” have their established pavilions, that disruption of culture is evident in that some have selected non-local artists, upsetting the original tradition of punting nationalism.

In a number of ways this, too, is the difference between Venice and Istanbul. The latter’s local environmental issues prompted Turkish artists to respond and it shows powerfully. Venice, for all the showcasing of the contemporary, seems dreamlike. Maybe it’s the magic of the place itself.

For what it is worth then: taking in both art biennials back to back gives art lovers a sigh of relief from the brash commercialism that rules so much of the art world today.

Easily the world’s capital for art since the Renaissance, Venice for the 58th time brings together enthralling works from all corners of the globe, ...
Life
8 months ago

What do those dashboard warning lights mean?

What do those dashboard warning lights mean?