Did William Kentridge come to save Zeitz MOCAA?

Ten days before the opening of what he confirms is the first, most comprehensive overview of his oeuvre, William Kentridge, the most famous SA artist, was walking from exhibition room to room in the Zeitz Museum of Contemporary Art Africa (MOCCA) while teams of installation experts were hustling about.

This is where one part of the retrospective will be on view. The cheeky title is Why Should I Hesitate? Putting Drawings To Work. The other, Why Should I Hesitate? Sculpture, will be shown at Norval Foundation on the other side of Cape Town. The exhibitions open to the public this weekend and run until the end of March 2020.

The largest exhibition to be held in Africa in over a decade by internationally acclaimed artist William Kentridge is set to open in Cape Town on August 25 2019 at the Zeitz MOCAA. Kentridge spoke on the upcoming exhibition, and his early work, among other things. Subscribe to MultimediaLIVE here: https://www.youtube.com/user/TimesLive

The scenes of hyper activity resemble nothing of the usual stately art museum ambience, but rather the frenetic of a building site racing against time. There are painters and carpenters, electricians and sound engineers. Walls have been knocked out, temporary ones built, new lighting installed, large areas sound-curated with large cork wall tiles, floor covered in carpets and sisal, customised furniture placed and sets resembling stage décor constructed.

In short, it looks like an entire makeover of a part of the two-year-old museum’s interior. And in many ways it is — thanks to this ground-breaking show. A reconfiguration of spaces was prompted by maximising the impressive affect of the Kentridge magic. And it certainly is for the better.

On a pre-opening walkabout with the artist, teams of studio assistants are unpacking prints ranging from small to impossibly large, unwrapping woodblocks used in the printing, reconstructing pictures according to detailed blueprint, checking on tapestries still unrolled in plastic, preparing peel-off wall images. 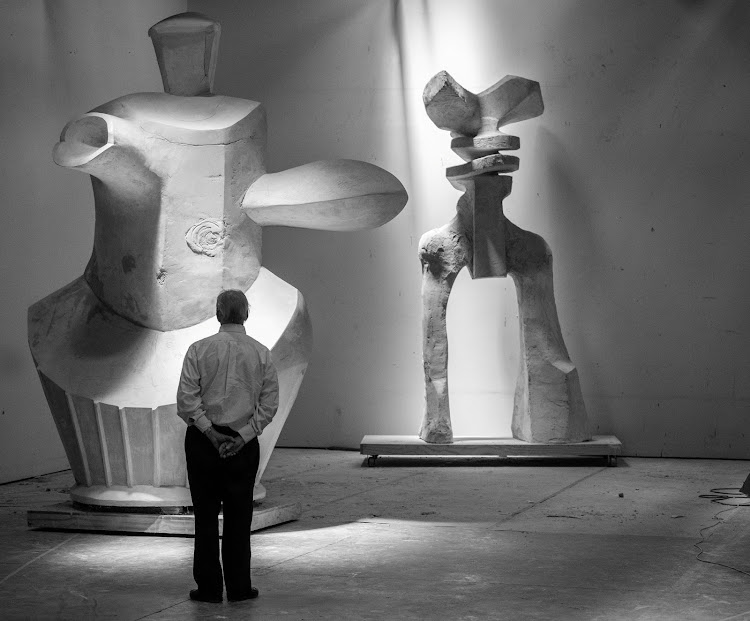 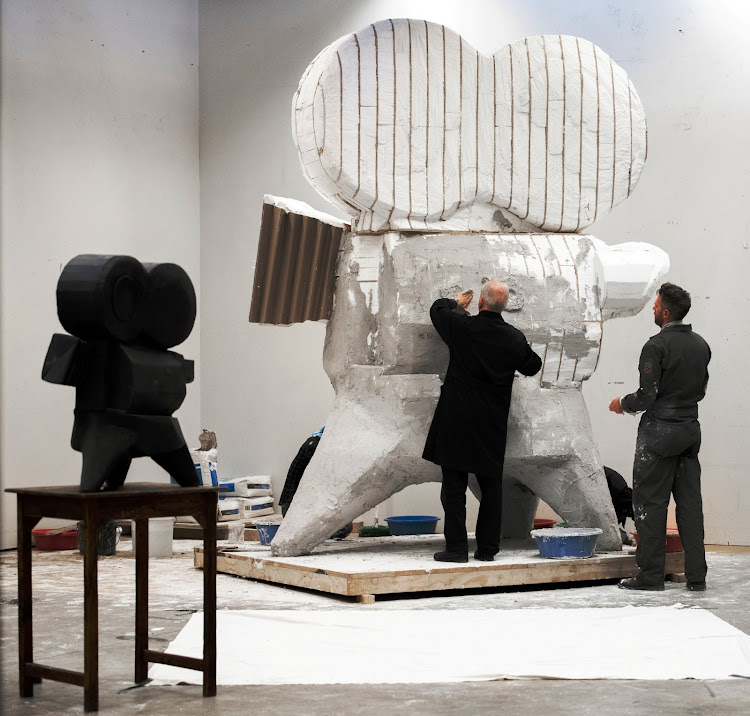 The 64-year-old Kentridge, dressed in his black and white “artist uniform”, moves about the activity like a quiet maestro. He is not visibly directing the hands-on crew as much as inspiring them, offering advice rather than instructing. He seems to be quietly enjoying the buzz. It all seems so smooth, so carefully pre-planned. So velvety professional.

And yet, this is a big deal — especially for Cape Town, not to mention the Zeitz MOCAA, which has not been without its detractors, riding as it has because opening in September 2017 more on hype and V&A Waterfront tourist attraction than a meaningful cultural presence in the Mother City. (Answers to questions about original funding of the grandly repurposed historic building, as well as the status of the sponsor-named collection remain murky. While shadows still linger over the first director Mark Coetzee’s quick departure in 2018.)

While the reworking of the heritage-charged old grain silo building (a long headache for the V&A Waterfront management) by the British designer Thomas Heatherwick (called the “billionaire whisperer” by the New York Times) had been hyped up, the practicalities of the inside spaces offer little sympathy to numerous, tricky artworks. Lauded for the dramatic, cave-like and selfie-friendly central atrium, the real work of presenting exhibitions beyond that has often been problematic.

One of the frequent criticisms of the museum is the rather odd box-like exhibition spaces. A series of interlocking white cubes, varying in sizes and space, with odd, disruptive flow and interlinking doors, visitors are often confused. When visitors fill rooms, these even feel claustrophobic. Not a good way to engage with art that is often challenging.

William Kentridge walks about the Zeitz MOCAA in preparation for his upcoming exhibition, Why Should I Hesitate? Putting Drawings To Work.
Image: ZEITZ MOCCA

In the latter, Zeitz MOCAA has stuck to its guns to show only art with, let us say, an African connection. Praiseworthy as this is, context is frequently difficult to suss, and connections are sometimes vague.

Now with the Kentridge mega show, it may all be pulled together.

(Inasmuch as Kentridge lives in, works in and is inspired by Johannesburg, the African connection holds. But in many ways, he is a truly international, cerebral artist with roots not so much in Gondwana but in the Western pantheon, as visitors will now delightfully observe.)

More important though, is the eye, expertise and professionalism that Kentridge, as an international artist, operator and exhibitor, has brought to the museum. At the same time his knowledge of installation and presentation in theatre, opera and such is finely tuned to experience of both presenter and viewer.

He convinced the Zeitz MOCAA management (who started discussions about the exhibition about a year or so ago and had to find and put up lots and lots of money for it) to change the impediments of the main exhibition area to be used for Why Should I Hesitate? Putting Drawings To Work on the third level. 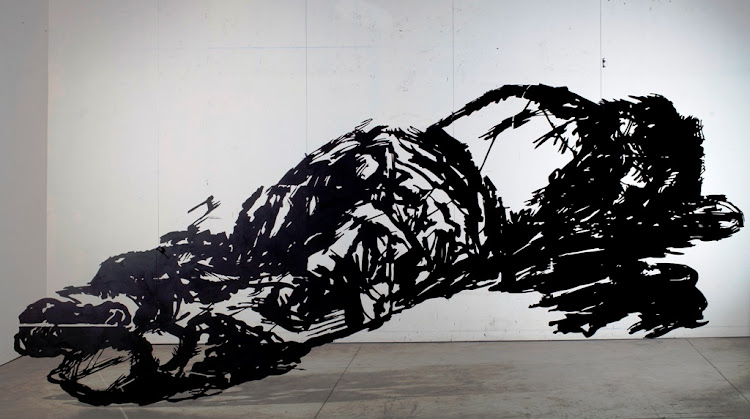 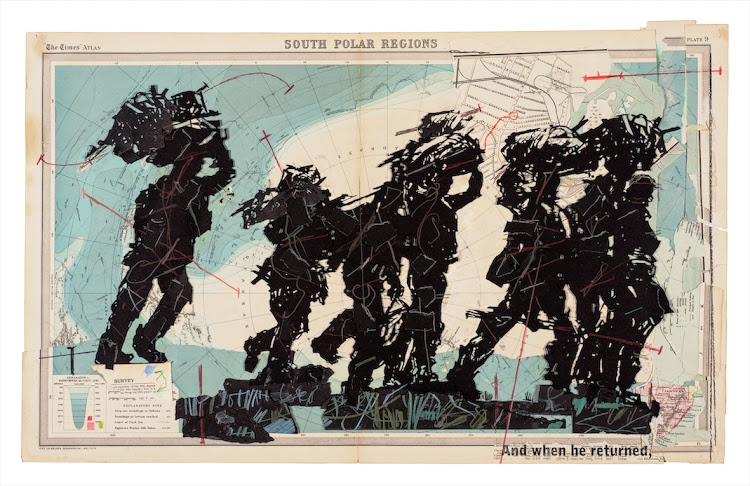 For example the long room, where his multichannel video work More Sweetly Play the Dance (2017) was installed for the original opening of the museum, has now been extended and the result is a more logical sweep to the mesmerising presentation.

Overall Kentridge’s sense of and for the theatrical and dramatic is useful in figuring out the relationship between artwork and viewer. (His theatre involvement dates back to early days, and these days he designs operas and creates processions and murals.)

We talk about the video experience. How long does a video keep or say a viewer’s attention? Widely used by so many artists these days, the question of affect and time is fascinating. Kentridge says everyone is free to watch or walk. His performance work often has the easiness for the viewers to take as much as they like.

His oddly humorous and commanding installation O Sentimental Machine (2015), last presented at the 14th Istanbul Biennale, is like a stage setting, a room with windows, doors and furniture. There are projections, sound and performance. It has come lock, stock and barrel up here to the third floor. The lighting, projections and sound have energised the otherwise difficult space.

Elsewhere a comfortable ottoman stands central in the repainted and refloored gallery where his newest tapestry, And When He Returned, rests on a special easel. On one of the museum’s few interior double-storey walls, a brand new giant aluminium cut-out, Pasolini from the Rome series Triumphs and Laments has been skilfully installed as counterpoint to the enormous woodcut prints that illustrate the theme.

In one of the interlocking spaces, he stops to ask the team preparing a sticker for the funky ancient typewriter, one of his signature images, to adjust it somewhat. There is a delightful, even offhand playfulness in all of this. It certainly breaks through the concrete, indulgent weightiness that has lingered in the building since its opening.

There is no doubt that the Kentridge imprint has shifted the Zeitz MOCAA’s character, perhaps even its status. After two rather wobbly years, the museum has landed a knight in shining armour.

When robots sit down to pen stories about us

When robots sit down to pen stories about us