The annual Turbine Art Fair returns with a bold leap

Upside under: ‘Fire on the Mountain’, by Greg Price. Picture: SUPPLIED

The past dozen years have not been happy ones for the SA political scene. But when it comes to art, things have never been better. It is perceived as the habitat of the refined and pampered soul, but it showed the brutal potency of its resources in the political unconsciousness by breaking onto that political scene, messing with the national debate, sparking riots, marches and personal statements.

Contemporary SA art has burst from its seams in that time, as has art on the continent in general, creating new ecosystems and getting institutionalised in events and ventures that are determined to stay. One of the more popular has been the annual Turbine Art Fair, with its aura of experimentation, repurposing the old and initiating the new, which starts on Friday.

This year it has taken a bold leap, necessitated by that popularity, moving from inner-city Johannesburg to Illovo, much closer to inner-city Sandton, the new financial capital of SA. The new premises are airy, spacier and in a suburb with fewer hijack hotspots, but it also has more of a shopping centre look. We’ll have to see whether it works to keep the name but ditch the physical connotations of turbinitude.

It’s also about the money, of course, the Turbine Art Fair following the Stevenson gallery to the north, but the organisers have kept the stress on affordability, putting prices in a range of R1,000 to R50,000. That’s reason enough to go, along with the promise of good eats and snacks, the general buzz of any fair, and the smorgasbord of works on display. The offering looks as interestingly diverse as ever.

In the absence of any visible initiative by the patronage system we call our government, money will be the prime mover of the arts for some time to come. The local scene is brimming with talent, but their chances of making a career of it are being decided by European and American art lovers either in the North, or in SA cities such as Cape Town, which the weak rand turns into a happy hunting ground for the foreign seeker of novelty.

This is neocolonialism – there is no other word for it. And so perhaps the greatest new contribution by Turbine Art Fair 2019 may come from the talks programme, curated by Kefiloe Siwisa and Nomvuyo Horwitz, under the general title, The Year of the Mirror. Said mirror reflecting the artist looking at others looking at her, rather than the old mimesis yarn.

The marginality hovering over local artists and those elsewhere in Africa, and the limbo between defiance and compromise, speak from the words used to title individual talks: Between worlds; The Oasis, We Began Before Words, Rear Window, When Things Fall Apart. The most interesting seem to be The Oasis, seeking answers to the question: how do the nonaligned spaces on the margins of art markets centre these margins?

And then there is a look at art writing, asking the question: what are the chosen languages of art discourse and who are voicing them?

Not everybody likes talks and many suffer from decolonisation fatigue, but there are still enough angry young people around to make a spark fly here and there. 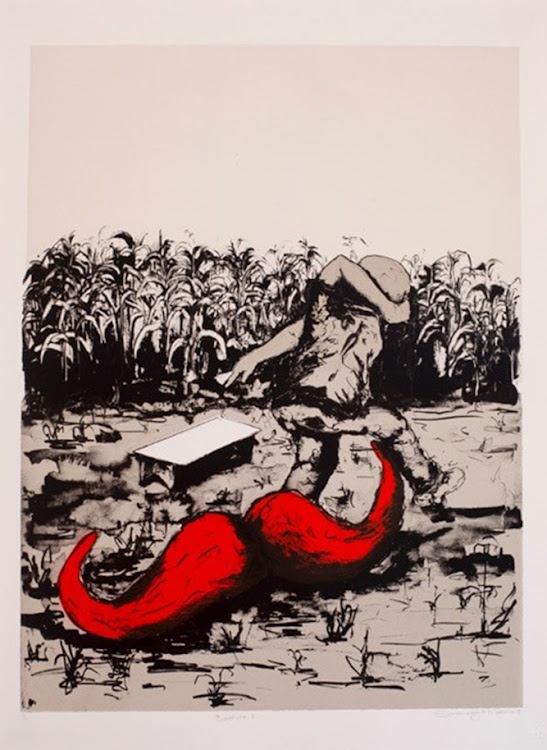 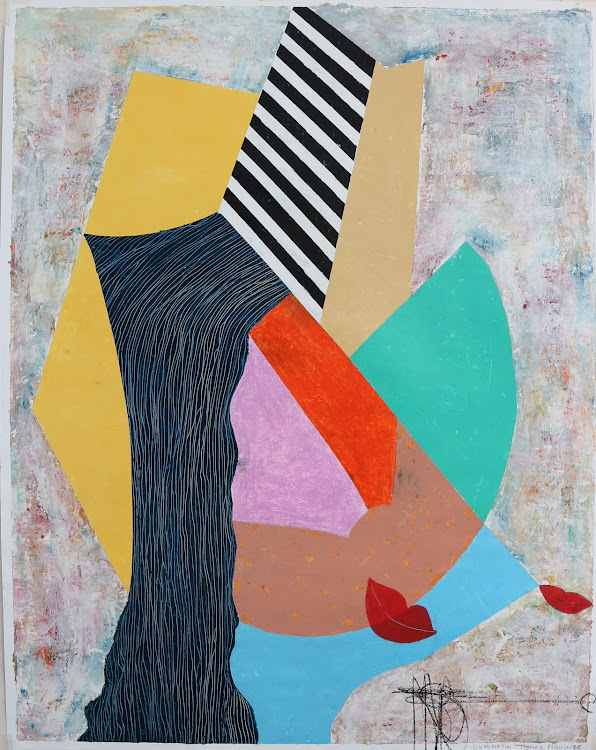 The indeterminacy of our times and a new world trying to get born are reflected abundantly in the works to be displayed. One artist I want to have a closer look at is Setlamorago Mashilo, two of whose colour lithographs show a youthful figure contorted in some emotion (anger, indecision, boredom?) or shouting (anger, triumph, playfulness?) before a mealie field, where bright red horns lie on harvested ground, or an official-looking white man stands with a bright red triangle hidden behind him.

Mixedness, deurmekaargeid, is celebrated in an appropriately afrocentric way in Alberta Whittle’s video Mammmmmmmmmmmywata Presents Life Solutions, drawing from the mythologised figure of the water spirit Mami Wata, Yemanja in Brazil, mamlambo in SA and Maman de l’eau in Trinidad. Whittle aims to disrupt binary identities, and will do so for three days long.

If you live in Illovo or environs chances are you would have been to Cornwall. In the artistic hub of St Ives two South Africans met in 1967: Khehla Maqhubela and Douglas Portway. Wilhelm van Rensburg of Strauss & Co has put together a presentation illuminating “the intersection” of their work.

Another feature that always surprises more than it disappoints is the mentorship programme previously called Fresh Produce, now RMB Talent Unlocked (Fulufhelo Mobadi gets the dedicated booth). There is also a graduate exhibition, where one may get enticed to bet on any of the emerging artists picked for the fair. Also worth ticking on the programme, is an exhibition by alumni from the Market Photo Workshop.

Taking it easy along the Cape Country Routes

What is chickenpox? Just ask Alexa

Taking it easy along the Cape Country Routes

What is chickenpox? Just ask Alexa