Europe sizzles as heatwave brings much of industry to a halt 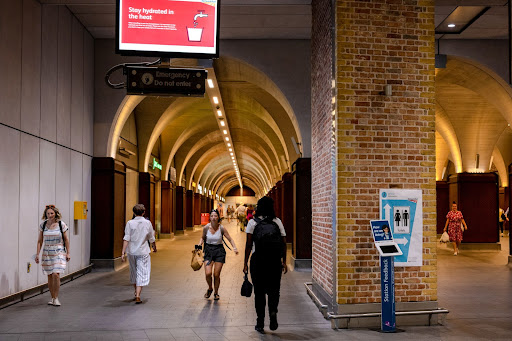 The few commuters who braved the heat of London’s Underground transport system on Monday had to endure temperatures deemed too hot to safely transport cattle, showing the brutal conditions sweeping through Europe affecting everything from transport to food and energy production.

Intense heat is on the brink of setting records in the UK, and the hot and dry conditions in a country not used to scorching weather are raising alarm across the region.

After deadly forest fires in Portugal and Spain, extreme northern hemisphere summer weather caused the water level of the Rhine, Europe’s most important river, to drop further, risking deliveries of coal and oil to power stations and industrial plants in Germany.

The tally of the damage for the summer has just started. More than 600 people have died across the region, and large swathes of France, Italy and Greece face extreme risk of wild fires. The EU has sent three firefighting planes to help battle forest fires — two to Portugal and one to Slovenia.

Amid concern over food shortages from Russia’s war in Ukraine, the development of crops such as maize have been affected, causing Paris futures to rally 10% since the start of July.

Working from home to avoid heat

Temperatures in London and the south of England might hit a record-setting 40°C this week. Trains on London’s Central and Northern lines were measured by Bloomberg on Monday morning at more than 30°C, the maximum temperature for transporting livestock such as cows, pigs and goats, according to UK regulations.

Sainsbury’s, Britain’s number two supermarket group — which also owns the Argos general merchandise business — said sales of fans last week rose 1,876% compared to the week before, while sales of air conditioning units were up 2,420% and sales of paddling pools were up 814%.

More people worked from home and avoided the commute with footfall dropping 18% in shopping districts near offices in London, according to retail-tracking data from Springboard.

About a third of British rail services were not running, and those that did faced restrictions due to the heat, Network Rail spokesperson Kevin Groves said. That means a journey from London to York would take four-and-a-half hours, more than double its normal time.

The East Coast main line from London to Edinburgh will be shut on Tuesday between midday and 8pm, because the line cannot cope with temperatures above 38°C due to timber foundations and the design of the overhead equipment.

Nights are also likely to be exceptionally warm for the UK, especially in urban areas. This is likely to lead to widespread impacts on people and infrastructure.

Napping to avoid the heat

The heat wave killed 360 people dead in Spain between July 10 and 15, Instituto de Salud Carlos III said on Saturday. June was the deadliest month in two years, with 830 people dying despite the country being used to such temperatures.

Trade unions are calling for stronger rules to protect workers’ health. At the moment, there’s no regulation on maximum temperatures for people doing work outside.

In central Madrid during the peak of the heatwave last week, construction workers could be seen napping inside cranes and heavy machinery during the hottest hours of the day in an attempt to escape the heat. Temperatures in the Spanish capital are forecast to remain at about 40°C this week.

In Spain, at least two people died because of the fires, according to authorities in the Castilla y Leon region. The body of a 69-year-old male was found on Monday in a burnt area in the province of Zamora, and a volunteer firefighter died on Sunday as he was helping extinguish a blaze in the same region.

Italy is also bracing for temperatures as high as 40°C later this week, including in the financial capital Milan. Record temperatures earlier in July already sent a glacial ice shelf crashing from the top of the Marmolada mountain, killing 11 people.

The regional climate agency for Lombardy, around Milan, has issued a warning for ozone levels, recommending that children, the elderly and people with respiratory issues stay indoors during hotter hours. In the region, the local farmers association Coldiretti reported vegetables, including melons and green peppers were burnt by the heat.

Italy is experiencing an “extreme drought,” according to the national research council’s drought observatory, with its largest river, the Po, at its lowest level in 70 years. The dry weather creates perfect conditions for wild fires to spread quickly.

As of Monday morning, about 1,100 firefighters were still facing blazes in Portugal, which has suffered over 200 more deaths than normal since the start of the latest heatwave.

But there are signs of progress. The fires have eased since last week, and the government on Sunday downgraded the situation to the “alert” level with temperatures forecast to fall.

The move eases restrictions on resources and allows life to gradually return to normal for some farmers and rural communities. Cereals may now be harvested in the early mornings and the evenings, according to the government’s website.