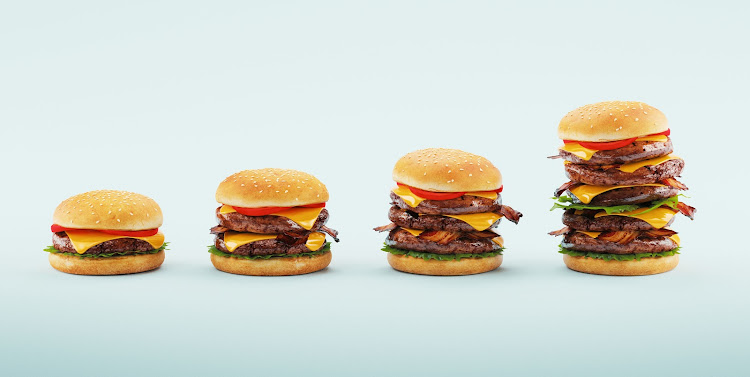 After he emerged from his Covid hospital stay in 2020, Boris Johnson announced his determination to tackle obesity in Britain. There was no doubting the urgency: Britain has the third-highest levels of obesity in Europe, with about three quarters of adults either overweight or obese.

It was already becoming clear that obesity risked worse Covid-19 outcomes and added pressure to Britain’s creaking National Health Service, which spends about £10bn a year on diabetes — more than it spends on cancer treatment.

So it seems a reasonable, if small, measure to require any restaurant, pub or cafe in England with more than 250 employees to display the calorie counts of their menu offerings.

Calories also have to be available to those using delivery services such as Uber Eats and Deliveroo. Surveys suggest people underestimate how much they eat by up to 50% and also tend to underestimate how many calories certain foods contain, so information and transparency can hardly be a bad thing.

And yet, as soon as the new rule came into effect this week, it was dismissed as either ineffectual or counterproductive.

Critics such as Henry Dimbleby, founder of the Leon chain of eateries, argued that calorie labels would do little to control obesity. Eating disorder charities, dealing with a huge rise in cases since the pandemic began, warned that calories displays can cause anxiety and increase fixations, though the rules do allow for menus without calories to be made available on request.

The debate shows just how hard it is to legislate for behavioural change in public health. While obesity results when the body consistently takes in more energy (calories) than it can use, losing weight has never been as simple as cutting calories. A pound of fat may equal about 3,500 calories, but there are many factors that determine how calories are processed in the body, including body composition, metabolism, stress levels, sleep and gut health. There are societal, physiological and often psychological components of the obesity epidemic that interact in complex ways.

Even after warning labels were slapped on packets of cigarettes, it took huge public campaigns, smoking bans, taxes and social pressure for rates to seriously decline. Unlike smoking a cigarette, consuming calories is necessary to survival; it’s also pleasurable and a fundamental part of what makes us social animals. 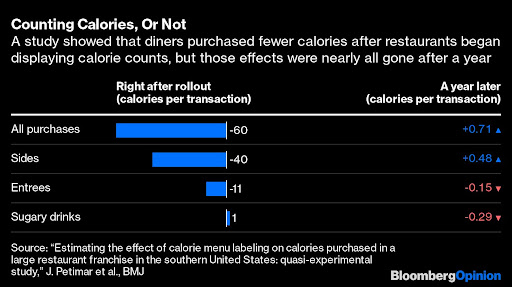 Chain restaurants in the US have used calorie labelling on menus since 2018, but it’s not obvious that it has made a dent in obesity rates or eating habits.

In one survey of studies, calorie counts on labels did seem to reduce the amount ordered, but awareness and impact can vary widely. The effect of the labels tended to be stronger in consumers who made high-calorie purchases, decreasing the number of calories per transaction by over a quarter. Of more than 57% of youth who reported noticing calorie labels in New York’s fast-food restaurants, only 9% used the information.

Residents of low-income neighbourhoods, where obesity tends to be higher along with price sensitivity, were generally the least likely to use the information to lower the caloric totals of their purchases. Such studies, of course, don’t record what is actually eaten (versus what is purchased) or how often the consumer eats out.

A large 2019 study of fast food restaurants in the southern US, which has one of the highest obesity rates in the country, found a small 4% decrease in calories purchased (about 60 per transaction) due to labelling, but that was followed by a gradual increase in calories over the next year. While purchases of side orders declined, purchases of sugary drinks increased.

The average American cut eight calories a year, which seems an awfully slow way of solving an urgent problem

The changes in that study suggest the average American might cut about eight calories per day, or half a kilogram over three years for an adult, due to calorie labels. Even if small shifts across the population can still lead to a reduction in obesity levels, that seems an awfully slow way of solving an urgent problem.

There are also costs to businesses in mandating calorie counts. Though compliance spending can be easily absorbed at larger chains such as McDonald’s, they can hit mid-size businesses hard, as they don’t typically have nutritionists on staff. Enforcement is left to local authorities, who are also tasked with the more serious job of policing restaurants for safety and hygiene.

Other interventions may produce greater impact. A meta-analysis of studies on colour-coded nutrition labelling found that the traffic-light labelling system and similar coding helped promote healthier purchasing habits. The NHS’s diabetes prevention programme — in which those enrolled are given advice over a nine-month period — resulted in a 7% reduction in the number of new Type 2 diabetes cases diagnosed in England in 2018 and 2019. More than 1-million people were referred to the programme since it was launched in 2016, and the NHS reports average weight loss of 3.3kg.

Still, the simple act of listing a number beside a menu item means people will be confronted with information about their consumption by default. Some diners may think twice when they see just how calorific seemingly innocent choices — Pad Thai noodles, for example, or a vegan burger — are. Restaurant chains, which have already been under pressure to improve the nutritional value of their offerings, may be forced to go back to the drawing board and improve their options.

The move is also consistent with newer thinking about behaviour change — or “nudging” — which emphasises small environmental cues at key points of contact. Small changes, like calories, can add up over time.

The slap that’s likely to keep on stinging

Much has been made of the Will Smith/Chris Rock dust-up, and this much is certain: life imitates art. Just ask Christos Tsiolkas
Life
1 month ago

Devlin Brown at the water cooler: Why am I experiencing a calorie deficit ...

Devlin Brown at the water cooler: Why am I experiencing a calorie deficit ...