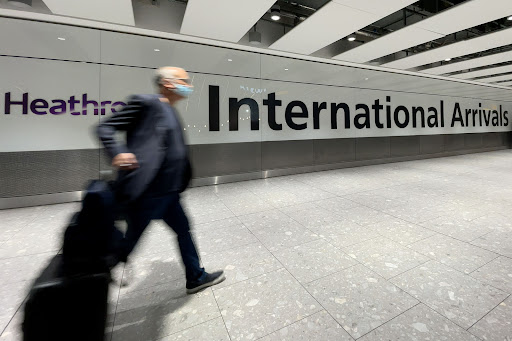 At least we’re learning. Remember when the early reaction to the outbreak of a deadly virus in Wuhan was to discourage people from changing their travel plans?

SA’s government didn’t sit on information about a new worrying variant of SARS-CoV-2, which the World Health Organisation has now dubbed omicron. It didn’t downplay it. On the contrary, authorities shared detailed slides so that countries could develop their responses.

Now it’s up to governments and local authorities to adapt to a fast-changing viral picture — one that remains blurry in places.

Genomic sequencing of infections in SA found that the variant B.1.1.529 contained many more mutations than the dominant delta variant. More worrying, some of the mutations occur in the area of the spike protein that is targeted by antibodies. That could mean existing vaccines will be less effective, something we should know with more certainty in the coming weeks.

On Friday evening, the WHO dubbed the variant Omicron (not “nu”, which seemed to be the Twitter consensus; and, in some conversations, a previous mutation designated “mu”). It’s also been called a “variant of concern,” which signifies it contains genetic changes that are known to affect transmissibility, disease severity or evade vaccines and therapies.

Certainly, Omicron’s transmissibility seems extremely high. The WHO was alerted on November 24 and says the variant was identified from a specimen collected on November 9. It is already in evidence in most of SA’s provinces, along with Botswana, and cases have been found in Hong Kong, Israel and Belgium. It’s quite likely it has spread beyond those places, too.

Omicron has around 50 mutations and more than 30 in the spike protein, far more than the Delta variant.

While South African officials are unhappy with it, travel restrictions are the obvious first response. The UK government announced a temporary travel ban on several countries Thursday night.

However, when a flight from Johannesburg  arrived in London on Friday, about 300 passengers were released into the wild with only an advisory message to self-isolate and take some tests. (For a government that has done a lot of complaining about lax French border controls, that counts as an own goal.)

Meanwhile, Israel put in new travel restrictions, quarantines and PCR testing at the border. The EU recommended an “emergency brake” on travel from SA. These restrictions merely buy a little time to map out the next steps. If scientists confirm that omicron can indeed escape the defences of current vaccines, then the race is on to develop a better defensive weapon.

Pfizer says it can deliver a vaccine that would counter the new variant within 100 days of sequencing. That’s fast. Regulators like the US Food and Drug Administration are likely to speed approval processes for vaccines that are just tweaked for new variants. Pfizer estimates it could make 4-billion doses in the first 12 months. Another 8-billion doses of the Moderna. and AstraZeneca vaccines are likely to be available in a similar time frame.

Even so, testing will need to be done on the updated vaccine. Getting it into enough arms will take many months, even with delivery systems primed by the current vaccine rollout.

Other lines of defence will be important, too. There are questions about whether the new variant may change the effectiveness of monoclonal antibody treatments, proteins that attach to a specific target in the spike protein of the virus and can be a key tool in treating early infection and even as a prophylaxis in those vulnerable to serious illness.

Maybe we’ll get lucky. The authors of a study published in the journal Nature in September found the presence of “abundant” neutralising antibody targets on the spike protein of the SARS-Co-V-2 virus; it apparently takes a lot of mutations to escape vaccines or natural infection.

Then again, omicron has about 50 mutations and more than 30 in the spike protein, far more than the delta variant. Ten of the mutations are in the so-called receptor binding domain (RBD), which is the part of the virus that makes contact with cells first; that’s compared with two with Delta.

Omicron was a statistical probability long before it turned up. With a 24% vaccination rate, it’s hardly a surprise it first appeared in SA. The Hong Kong case was in a vaccinated traveller; the Belgian in an unvaccinated one. The longer it takes to vaccinate whole populations, the faster we will cycle through the Greek alphabet with new variants; the only way to prevent that is to vaccine more people faster.

Wherever Omicron is seeded, it’s likely we’ll need the now familiar range of detection and mitigation measures — mask mandates in public places, more frequent testing and work-from-home guidance. While these measures are already back in place in much of Europe, it would be an unwelcome regression for the UK, where mask-wearing is progressively rarer.

SA’s transparency and the early response suggests we’re at least learning the first lesson of pandemic management: that “wait and see” is a losing strategy.

The praise will come as scant consolation to those forced to cancel trips to see families over the holiday season or business owners desperate for ...
National
8 months ago

More scientific data is needed about the new coronavirus variant before the US can determine whether to halt flights from southern African, says Fauci
National
8 months ago

Belgium confirmed one case of the new Covid-19 variant in someone who travelled from abroad as countries across Europe halted air travel from ...
News
8 months ago
Next Article

My Brilliant Career: Ensuring a wedding is a couple's most special day

My Brilliant Career: Ensuring a wedding is a couple's most special day