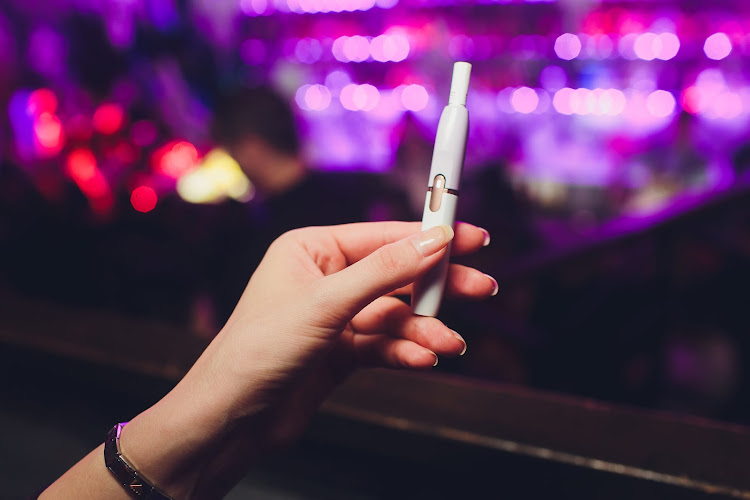 Vaping exposes users to about 2,000 chemicals, including potentially harmful industrial compounds, according to a study of four popular brands by researchers at Johns Hopkins University.

Most of the chemicals found were unidentified, but of those that were, six were cause for concern, according to the study published in Chemical Research in Toxicology, a peer-reviewed journal.

Researchers found condensed hydrocarbon-like compounds that are typically associated with traditional combustion products such as cigarettes, though vaping is often marketed as safer than those products. The study also found caffeine in some, which is not disclosed on labels.

E-liquids — a mixture of water, nicotine and other ingredients that are found in vaping products — and aerosols were studied for products sold by Juul Labs, British American Tobacco, ITG Brands and Mi-One Brands. The companies did not immediately return messages seeking comment.

“People just need to know that they’re inhaling a very complex mixture of chemicals when they vape. And for a lot of these compounds, we have no idea what they actually are,” Carsten Prasse, an assistant professor of environmental health and engineering at Johns Hopkins and an author of the study, said.

Cigarette makers such as BAT and Altria, which owns a stake in Juul, are striving to convert smokers to nicotine alternatives such as e-cigarettes that they have framed as having reduced risk.

Regulators have yet to fully agree: the US Food and Drug Administration (FDA) has authorised some products for sale under the reduced-risk logic, but the agency is still reviewing thousands of applications by e-cigarette makers to keep products on the market. To do so, companies need to prove that their products’ benefit for adult smokers outweighs the public-health threat posed by youth use.

E-cigarette aerosols contain other completely uncharacterised chemicals that might have health risks that we don’t yet know about.

The Johns Hopkins study, which the FDA is reviewing, looked at only tobacco-flavoured liquids. Recent decisions from the FDA have determined that thousands of flavoured products will need to be removed from the market.

Researchers found caffeine in BAT’s Vuse and Mi-One’s Mi-Salt vaping products. The FDA allows caffeine to be added to beverages and food as long as it is listed in the ingredients panel.

Juul’s devices, meanwhile, contained a chemical commonly used as a flame retardant for polymers, which the study speculated might be a contaminant from the device itself. Condensed hydrocarbon-like compounds increased in all of the products due to vaping except in ITG’s Blu.

Hazardous chemicals highlighted in the study include isophorone, detected in Mi-Salt and Vuse products, which can cause effects ranging from nose and throat irritation to fatigue and depression, according to the Environmental Protection Agency. Vanillin, a synthetic form of vanilla flavouring that has been reported to cause allergic reactions and other ailments, was detected in Mi-Salt, Vuse and Blu.

“Existing research that compared e-cigarettes with normal cigarettes found that cigarette contaminants are much lower in e-cigarettes,” Prasse said. “The problem is that e-cigarette aerosols contain other completely uncharacterised chemicals that might have health risks that we don’t yet know about.”

• Michael Bloomberg, founder and majority owner of Bloomberg News parent Bloomberg LP, has been a longtime champion of tobacco-control efforts. He also is a major donor of Johns Hopkins University, where he received a degree.

While survey shows people are smoking more during the pandemic, global cigarette volumes remain on a downward trend
Opinion
1 year ago

This new generation of cigarettes — whether it is marketed as 'heat-not-burn', ‘electronic’ or ‘vaping' — is more than just a new product line for ...
Opinion
1 year ago

The group’s Jack Bowles believes it can generate £5bn from new category brands like Vype, Vuse, glo and Velo by 2025
News & Fox
1 year ago

Cigarette manufacturers say sales are up, albeit slightly, but e-cigarettes and ‘next generation products’ are down by some margin
World
1 year ago

The study cannot prove that vaping causes Covid-19, but researchers say vaping involves repeated touching of hands to the mouth and face, which is ...
World
1 year ago
Next Article

Sol Plaatje: a man of vision

Sol Plaatje: a man of vision