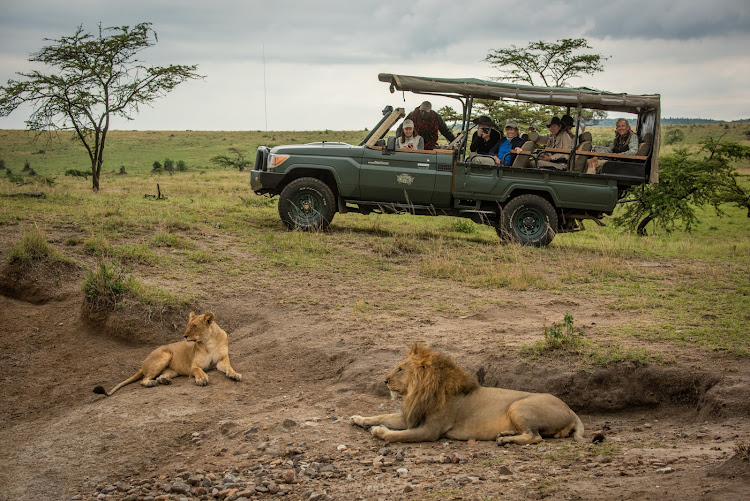 For Sipps Maswanganyi, a safari guide with 20 years of experience in the African bush, it was one memorable sighting that sold him on electric safari vehicles.

“I could hear this buffalo panting heavily deep in the bushes,” recalls Maswanganyi, head guide at Cheetah Plains, a luxury outfit in SA’s Sabi Sands Game Reserve. Following those faint sounds, he found a 680kg bovine on its last breaths, being taken down by seven stealthy lionesses. “If I was in a noisy diesel vehicle, I would have driven right past, not hearing a thing, and we would have missed it all.”

Though the diesel-hungry Land Rover chugging noisily across the African savannah is a time-honoured trope of the safari industry, it’s an image steadily being replaced by eco-friendly, whisper-quiet vehicles powered by sunshine.

“It was an easy decision,” says Cheetah Plains owner Japie van Niekerk of the decision to offer an all-electric fleet of safari vehicles. “They are silent. They’re low on maintenance. And there are huge logistical benefits, as we don’t have to deliver fuel to the lodge out in the bush. But more than that, it’s the right thing. We are guests in nature, so why leave a footprint when we can be silent and blend in?”

Van Niekerk is just one of roughly a dozen early adopters, who since 2014 have begun ditching diesel engines. Now, with the technology becoming more affordable, and a growing awareness around sustainable travel causing safari outfitters to double down on greening their operations, the trend — which transforms the safari experience for guests, too — is finally gaining traction.

Today’s electric safari vehicles (ESVs) are typically rebuilt Land Rovers or Toyota Land Cruisers, the diesel-driven industry standards. Private companies in SA and Kenya are responsible for making most conversions, replacing the engine, gearbox and combustion components with an electric motor, batteries and control system. The extensive retrofit often allows for more whimsical upgrades, too, from inbuilt seat-warmers to USB charge points. The process costs from $35,000 (R495,544) to $45,000 a vehicle.

Though prices have come down, that’s still a substantial investment, even for the largest safari operators in Africa, which explains why the likes of AndBeyond, Singita and Wilderness Safaris have yet to add ESVs to their fleets.

“In time, we will convert to electric vehicles,” says Andrea Ferry, Singita’s group sustainability co-ordinator. “The reason we’re not there yet is simply about priorities. Right now, it’s better to spend our available funds on renewable energy.”

“There’s no point having an electric vehicle charged by a coal-driven national grid. You need to be on solar and charge the vehicle on solar,” says Tony Adams, conservation and community impact director at AndBeyond. “Electric vehicles are phenomenal in terms of guest experience, but our focus is on the work we’re doing in the communities — converting to solar — and the reduction of our overall carbon footprint.”

Converting the three Land Cruisers at Emboo River, in Kenya’s culturally rich Maasai Mara National Reserve, cost $105,000, an expense co-founder Valery Super estimates will be recouped in three years, thanks to lowered operational costs. At Ol Pejeta Bush Camp in a rhino-dense corner of northern Kenya, Asilia Africa is running a trial on a single ESV and already counts savings of about $8,000 a year in fuel and maintenance. And Chobe Game Lodge in northern Botswana has had such success with ESV jeeps that it has also invested in electric boats.

Capability isn’t a concern. Electrical components in modified safari vehicles are surprisingly rugged; sealed engines allow guides to ford rivers and wade through deep sand, just as they could with a traditional, combustion-driven vehicle.

All this means that guests won’t be limited as to where they can go, much less what they can see. While early conversions suffered from range and recharging issues, current ESVs manage about 100km on a single charge, roughly twice the distance of your average game drive.

And the benefits are tangible. For wildlife enthusiasts, the metallic rattle of a diesel engine may feel exhilarating — proof of adventure — until it spooks the herd of red lechwe that were about to become supper for a lurking leopard. With the help of electric vehicles, even birders can silently reposition for better views without scaring off a dream sighting. There’s an entire bushveld chorus that most people miss out on.

“Without the noise of a diesel engine, you can really connect to your guests and to nature,” Maswanganyi says.

Even he has been surprised by some of what he’d been missing under the roar of his engine all this time. “You can hear the hyenas call while you’re driving,” he says. “And on some nights you can even hear porcupines walking through the bush.”

It's a sumptuous safari at Tswalu Kalahari, with eats by SA's first Michelin-starred chef

At this leading private game reserve in the Northern Cape, Klein Jan restaurant tells the story of South African culture through food
Life
2 months ago

Enjoy a quiet, yet electrifying, safari at these luxury lodges
Lifestyle
4 months ago

Children are not eligible for Covid-19 vaccines, but high-end travel companies have introduced themed getaways for families
Life
5 months ago
Next Article