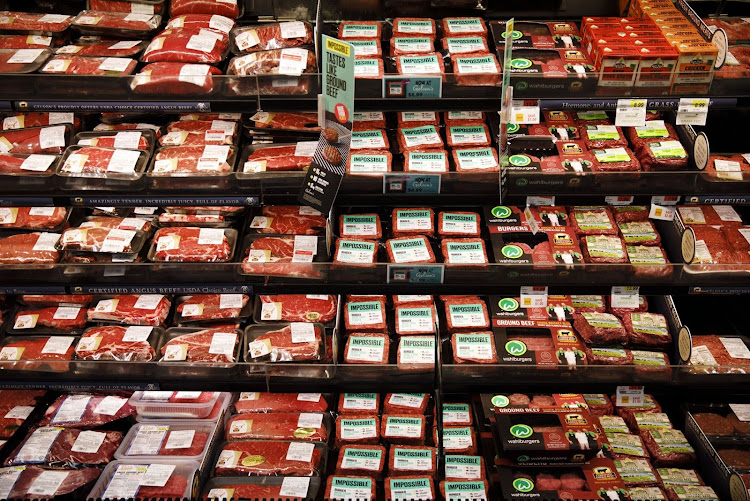 Beef is seen for sale alongside Impossible Burger’s plant-based meat at a Los Angeles grocery store in the US. Picture: BLOOMBERG/ PATRICK T FALLON

When a tuna marketing executive took a bite of the dehydrated tomato seasoned with olive oil, algae extract, spices and soy sauce early last year, he was astounded.

“This is going to be a problem for us,” he said. At least that is how Ida Speyer, cofounder and CEO of Mimic Seafood, recalls it, designating it the highest praise she could have imagined for the delicate slice of tuna that — despite what the marketing executive’s taste buds indicated — contained no tuna.

The Madrid-based start-up’s Tunato product, fabricated from a speciality tomato variety grown in southern Spain that resembles sliced sushi-grade tuna in shape and size, is part of a growing class of food innovations fighting for the last empty shelf in the booming plant-based protein market: seafood.

Faux fish, which Speyer concedes “maybe five or 10 years ago would have seemed too far out, too different, or only something for vegans”, is just a tiny fraction of the alternative protein market, dwarfed by the more mature faux meat and alt-dairy sectors. But the sector is evolving quickly.

Concerns about red-meat consumption, antibiotics in livestock and climate change have enticed more global shoppers to go meatless, at least once a week. But fish, with its heart-healthy reputation, does not have the bad rap. Still, fears of overfishing, heavy-metal consumption and microplastics, fuelled by documentaries such as Netflix’s controversial Seaspiracy, are priming the switch.

The potential market could be huge: beyond vegans and flexitarians, faux fish might also be a welcome addition to, say, a pregnant woman avoiding high-mercury swordfish or a consumer with a shellfish allergy. And big corporations have taken notice.

Thai Union, whose familiar tinned fish brands also include John West and King Oscar, began mulling plant-based products about three years ago to get ahead of concerns around sustainability. It rolled out its first vegan product — a flaked faux tuna made of soy, wheat, and pea protein that can be used in a traditional mayonnaise-based salad — in 2020.

“We have the customers in our hands,” says Tunyawat Kasemsuwan, director of the company’s global innovation centre, referring to the name recognition its brands already have.

Thai Union is mainly targeting flexitarians, whose share in the population has been growing, and young consumers.

“Gen Z will be the first movers, but there will be a ripple effect” on traditional seafood consumers, who tend to be older primarily because seafood is a premium-priced product, he says.

French foodmaker Odontella sells a plant-based smoked salmon made from algae and pea protein in speciality supermarkets across Europe. The product is a long way from its origins as a 2007 experiment in cofounder Alain Guillou’s kitchen. It tastes very close to the real thing, though the price is heftier.

The key to price parity will be scaling up production and tapping more markets. “When that happens, you know the mega tipping point is here,” says David Yeung, founder and CEO of OmniFoods, a Hong Kong-based foodtech known for its vegan pork that has been expanding into seafood. “I believe this is a matter of two to three years.”

Because seafood is rich in vitamins and minerals, which already makes it a healthy protein alternative to meat, vegan start-ups have to ensure the same nutrients end up in their plant-based replicas. Algae such as those in Odontella’s fake salmon also contain the omega-3 fatty acids in conventional fish. OmniFoods uses a high-quality canola in its new seafood line for the same reason. Faux-fish makers also risk pushback from traditional fishing trade groups who do not want vegan products labelled as “tuna” or “salmon”, mirroring the debate about whether faux animal products can be labelled meat.

If plant-based seafood maintains its growth rate, it can catch up with fake meat’s share of the conventional market within the next decade, the Good Food Institute’s Lamy says. The technology is “not quite there yet”, she says, but the sector is making progress. “If you look even at just photos of products from now vs three years ago, it is totally a different game.”

Spain’s Mimic is banking on that. Though it halted distribution of its tomato-based tuna when Covid-19 lockdowns hit, it plans to resume sales in several Spanish cities by year’s end, eventually expanding into Denmark. The start-up has visions of becoming “the Oatly of seafood”, giving the traditional protein market a run for its money as nut and oat milks did for cow’s milk.

“I think if the dairy industry had known 10 to 15 years ago what was coming, they would have prepared differently. The seafood industry can actually in a way benefit from what we have seen with dairy and beef, because the change will come,” Speyer says of her expectation that more consumers will move away from traditional seafood. “It’s going to be a party for the rest of us. But for some companies, this could be a real crisis.”

Bloomberg BusinessWeek. More stories like this are available on bloomberg.com.

Faux bacon sales are flying as producers innovate with ingredients, but they still have a way to go
Companies
1 year ago

How to market meat-free to meat eaters

SPONSORED | Is it worth it for retailers to cater to the needs of vegans and vegetarians?
News & Insights
1 year ago