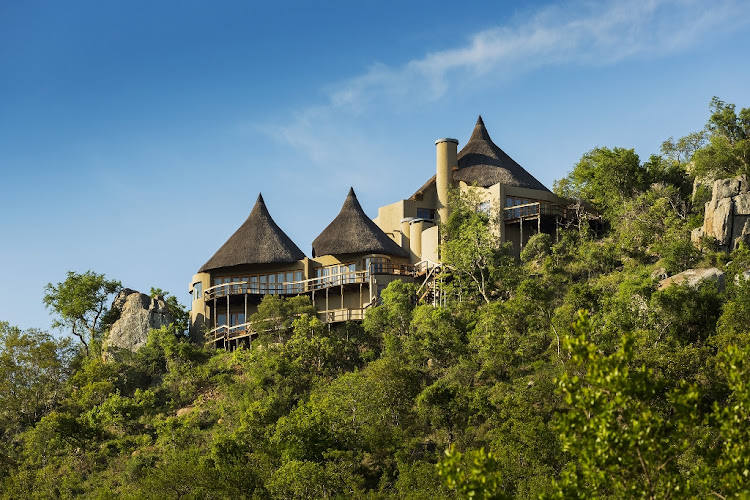 A view of Cliff Lodge at Ulusaba. Picture: SUPPLIED

We came across them in the early dark, half a thousand buffalo slouching across the Sabi Sands. The ranger cut the engine and the lights and we sat in silence, our hands cupped around our ears like giant antennae.

Some people call them a “gang” or, more poetically, “an obstinacy of buffalo”; but for me, as they whorled around us — grunting, snorting, chewing and farting their way into total darkness — it began to feel more like “a revelation of buffalo”. Not the “black death” of which hunters speak, but a benign bovine intelligence … to whom we seemed so incidental, I half wanted to give them a friendly smack on the bum just to help them on their way.

Being “at ease” among wild animals is a tricky business. Get too close and the possibility of real danger overwhelms the thrill that comes from proximity. Keep too great a distance, then why bother? Both Trevor “Savage” and Donald “Sibuyi” (a fitting combination of names for rangers) know exactly where this line is: present enough to read their guests and the animals, know the difference, and yet remain removed enough for it to feel like an unmediated encounter. I’ve never experienced it done so well.

But then we are at Richard Branson’s private game reserve, so perhaps it is to be expected. It is called Ulusaba, which means “place of little fear”. The name derives from a granite massif that used to be a Shangaan lookout but is now home to Rock Lodge, which — as my current partner put it — “juts out from a tower of rocks like a thumbs-up”.

Something about being immersed in nature makes people want to take off their clothes. Not all of us did.

The lodge was closed when we were there, but it’s not difficult to imagine what it must be like “in full flight”. Wild animals, mostly elephant, occasionally brave the vertiginous climb, but these days one is more likely to lie in wait for them in a private plunge pool, with a cold beer and a camera.

But it is the expansive views that are the real attraction, as one looks out over the distant Drakensberg on one side and on the other, across the almost endless plains to the far away glint of sunlight on the steel roofs of Bushbuckridge — a reminder, perhaps, of how thin the line always is between civilisation and wilderness. I wonder, beer in hand, what the Shangaan must have seen hundreds of years ago, and whether it could ever have been me.

Sir Richard prefers to stay at Safari Lodge on the leafy banks of the Mabrak. I can understand why. What it loses in perspective it makes up for in intimacy. We stayed in “his” suite — which, like the rest of the lodge, is showy without showing off. Everything from thread count to room service seemed infused with a generous levity that left one needing for nothing while feeling that whatever one might want was always going to be ready to hand. It felt like inhabiting someone else’s exalted life, if only for a night.

We made the most of it. Dinner, though the four of us were the only people there, rolled by course by delicious course. So, too, did the bottles of Springfield Whole Berry Cabernet. The fire spat huge sparks of laughter into the night sky, as we skipped ever more perilously between its heady glow and the plunge pool. Something about being immersed in nature makes people want to take off their clothes. Not all of us did. 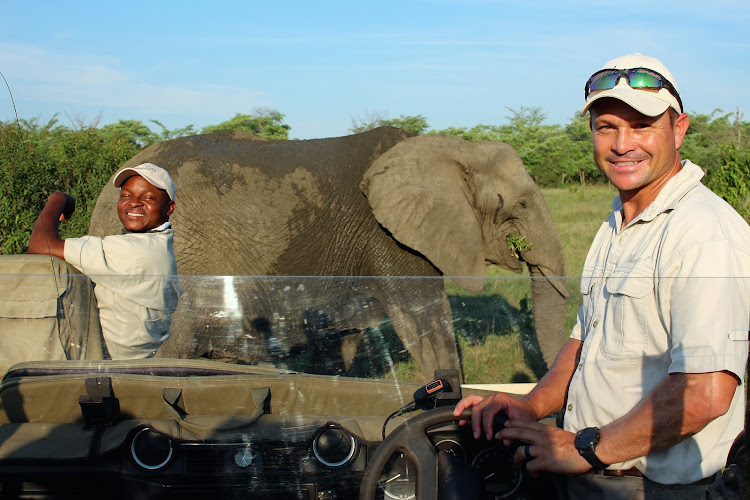 The morning arrived in brutal garb. And yet, after rubbing the blur from my eyes I saw that what I had taken to be a grey-speckled morning was actually a herd of elephant, drinking water from a pool that looked suspiciously like our own. Game viewing from the comfort of one’s own bed lends intimacy a whole new perspective.

Not one that is conducive to game drives, however. Why get up, when what you are going out for is already here? Why brave the icy travails, the bumps, the grinds of roads less travelled, the chameleons, the hard-won bonhomie of strangers and their stories over bad coffee and wannabe rusks … when the very thing you most want to see is right before your very eyes? It didn’t make any sense, I argued … but, as it turned out, I was wrong.

Situated next to the most fertile part of the Kruger, Ulusaba is justly renowned not only for the big five but for its abundance of them. We saw leopards in coitus interruptus — not by us, I’m told, or by vehicles from other camps (there is a lot of traffic in this part of the park), but by the very rigours of the act itself. Leopards mate as much as fifty times a day and often for an entire week. What we were seeing was merely a lull in a carnal storm.

We watched as the female repeatedly whipped the male in the face with her tail, until it all seemed a bit too much like a metaphor for things best left unsaid … and so, we moved on, deeper into the burnished bush until we came across three male lions, who also looked to have had a torrid night of it. 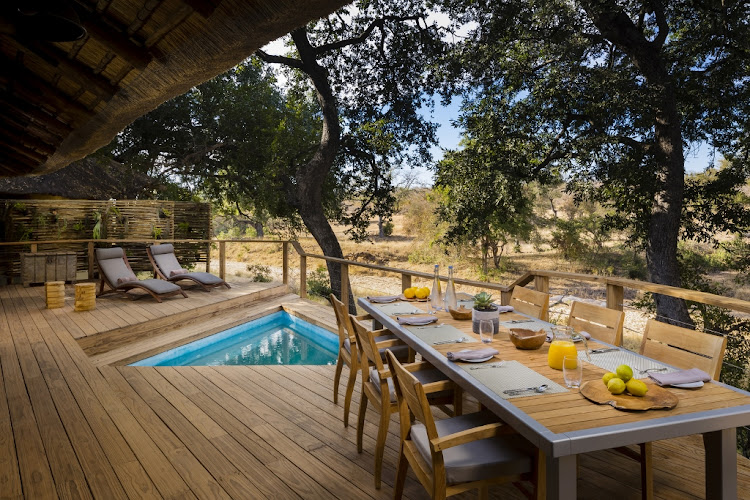 Still bleeding from gaping wounds, and too exhausted to give us more than a passing glance, they lay scattered on the sand like survivors of some terrible shipwreck. Whether it had been a battle with an unyielding prey or, as is more likely, with other lions, it was clear that they had not been victorious. These were not “kings of the jungle”, but a reminder that a lion’s life is often “nasty, brutish and short”.

Perhaps, however, though not without a leap of imagination, what lay before us battered, broken and bruised was not simply an ignominious image of defeat, but rather the shambolic beginnings of a coalition that would one day come to rival that of the infamous Mapogo lions — who started off as three nomadic brothers, grew into a band of five, then six and then, for the better part of the 2000s, turned the Sabi Sands into a bloodbath of lion-on-lion violence. (If you have never seen a lion kill another lion, my advice to you is don’t … It will forever alter your worldview.)

Thankfully, such gory imaginings were soon put to rest by a “parade” or, more poetically, by “a memory of elephants”. Trevor cut the engine, and we sat in silence as they moved around and “through” us — eternally beautiful, eternally curious, their trunks swirling in and out of the vehicle like the ethereal branches of a distant dream.

Later, as we lay on the banks of a river, nursing bad coffee and wannabe rusks, I wondered “how close was too close” when it came to animal encounters. Perhaps intimacy is perspective? But I really don’t know. I thought about being back at the lodge, lounging in luxury by the pool; but as I lay in the sand, listening to the wind ripple through the jackalberries as I watched a bateleur tip its wings to the sky … I knew that what I wanted was to be nowhere other than here.​

WHERE IT IS: Ulusaba is in the western sector of the Sabi Sand Game Reserve in Mpumalanga, and shares unfenced boundaries with the Kruger National Park.

GETTING THERE: It is about a six-hour drive from Joburg or an 80-minute flight. Federal Air flies directly to the lodge’s private airstrip. See fedair.com.

MORE THINGS TO DO: Though “Anyone for tennis?” is a phrase not normally heard in the bush, Ulusaba has two tennis courts. There is a bush observatory for guided stargazing and The Aroma Boma spa offers treatments using Africology products.

FAMILIES & GROUPS: Children six and older are welcome at Safari Lodge and there is a club for children under 12. Larger groups — up to two adults and three children under 12 — can book the exclusive-use Safari Suite and adjoining Safari Room, which has a private entrance, a walled garden with a boma fire pit, large living space, a plunge pool and a private safari vehicle. R40,000 per night (based on a three-night stay).

SPECIAL SA RESIDENTS OFFER: SA residents pay from R6,000 per person per night in an Elephant or River room, based on two people sharing, with a minimum three-night stay. Includes all meals and drinks including local beverages, minibar, twice-daily game drives, a daily walking safari (weather dependent) and Wi-Fi.​