From Glasgow to the Scottish island of Jura is half-an-hour by helicopter. Not having one of those at my disposal, though, it takes me most of the day to get there. First, a large bus winding along moody lochs and around mountains to Kennacraig. Then the big CalMac ferry to Port Askaig on Islay — which is little more than a pier, a pub and a hotel. And then another, much smaller ferry that battles swift currents to deposit me at the lonely jetty at Feolin.

A bus is meant to take me to my final destination on the island, but I can’t spot it. There’s a minivan with “Corporate Tours” emblazoned on the side that I assume is there to collect tourists. Only once it has departed and there’s no sign of any other vehicle do I realise that must’ve been it. I board the vehicle when it returns an hour later, one of a handful of passengers — mostly children who attend the high school on Islay.  The 25-mile journey northwards gives me a sense of the island: moors and peat bogs, secluded bays, the looming Pap mountains, an occasional cottage.

Finally, about two-thirds up this narrow finger of an island, I reach Ardlussa: a deerstalking estate and working farm owned by Andy Fletcher and his wife, Claire, with a large, ancient manor at its heart. I’d stumbled across it on the UK website of Worldwide Opportunities on Organic Farms, which connects volunteers with opportunities to work on British farms in exchange for food and lodging.

For a long time the Scottish islands had intrigued me — their remoteness, their austere beauty. For a freelance writer on a tight budget, I figured two weeks working on a farm at the edge of the sea was a great way of getting an authentic taste of island life. And boy, was I right.

The CalMac ferry on its way to Port Askaig on Islay. Picture: ALEXANDER MATTHEWS

Every morning I don Wellington boots and walk the Fletchers’ two dogs. Then, a cup of tea back in the house’s cosy kitchen before the hard graft begins — three hours in the morning and three in the afternoon, with a break for homemade soup and freshly baked rolls between.

There is plenty to be done. It’s spring — calving season — and while the four Fletcher children can be relied on to do odd jobs and assorted feedings, Andy and the assistant estate manager are the farm’s only full-time pair of hands.

Occasionally I’m roped in to help herd adorably dim-witted cows into muddy pens or corral sheep into pasture — a team effort. But much of the time, I’m on my own.

There is weeding in the greenhouse, where I shovel clods of weed-choked soil onto the wheelbarrow, pushing this to the compost heap when it’s full.

In the shed, I heave chunks of pine to the juddering petrol-fuelled wood splitter. There’s the satisfying hiss as the blade slices into the wood, and thuds as the pieces fall to the floor. The scent of pine resin, sharp and sweet, stains the dank air.

Caribbean Island is a fun, flavour-filled add-on to your itinerary if you happen to be visiting Central or North America, writes Alexander Matthews
Life
7 months ago

One rainy morning, I dig a ditch into the side of a hill, slicing into thick, slurpy mud with a spade so that the water streaming downwards is redirected away from the road below. Another morning, I walk down to a storm-scoured cove and collect clumps of rotting seaweed to be used as a natural fertiliser. While I work, I also pick up sackfuls of rubbish that have washed ashore — a bounty that includes rope, fishing tackle and heaps of plastic.

Predictably, it rains a lot. There is a brief snowstorm, followed by dazzling sunshine. Slightly shocked, I wear sunglasses and strip down to a T-shirt to perform my most important task: juniper planting.

In 2015, along with two other local women, Claire Fletcher cofounded Lussa Gin, an artisanal distillery which operates out of the old stables on the estate. While juniper, the most important of the gin’s 15 botanicals, is sourced from elsewhere, it is Fletcher’s hope that, in time, they’ll be able to use a home-grown crop.

Planting the little bushels in the stubborn clay soil is hard work. Occasionally, I stretch my aching back, pausing to admire the mainland’s purple hills and the milky teal of choppy sea which separates them from me. By the late afternoon, I’m exhausted. I soak in the huge bath. Even after scrubbing my fingernails, there is still dirt under them. I don’t mind — I wear it as a badge of honour.

Dinner, shared with the family, is typically something hearty — a Spanish omelette, for example, or chilli con carne, washed down with a nice glass of red. Sometimes I’ll join them afterwards to watch TV by a crackling fire. Then I retire to bed with a book. 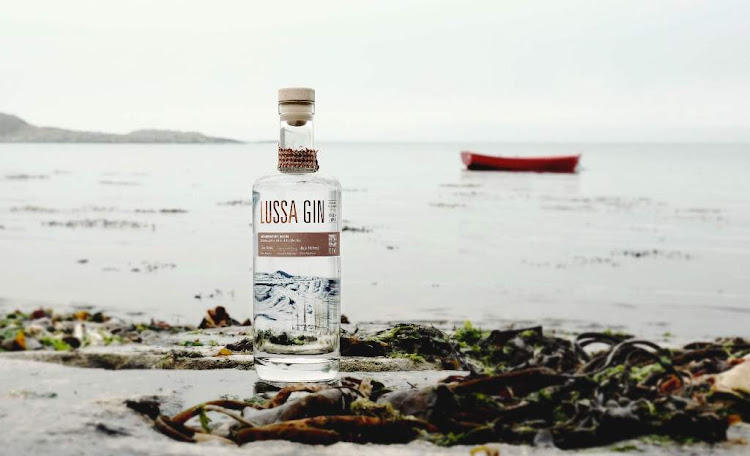 On the weekends, when I’m free to do as I like, I go on long, solitary walks. I make a pilgrimage to Barnhill, an isolated cottage where George Orwell wrote 1984 — not long before dying of tuberculosis. I also tramp across squidgy peat bogs to the windswept western side of the island, stumbling across a wild goat and her kid.

I visit Jura’s sole village, Craighouse, where most of the island’s 230 residents live. In addition to its handful of houses, primary school and a community-owned grocer, Craighouse is also home to the Jura Distillery, where the island’s eponymous whisky is made. In the village’s single pub, affixed to its only hotel, a local lass is celebrating her birthday. People are friendly, and the drams of whisky I order soon put me at ease. There are live music and singing, followed by dancing.

Sunday evening. Back at Ardlussa, the new-leaved trees are silhouetted against pale blue sky. I leave the Fletcher family clustered around the TV, and walk down the lane to take photos. The sea is mirror-calm.

My fortnight on Jura has ended far quicker than I wanted it to. I’ve felt at home and content here in a way that feels almost uncanny. Physical labour is tough: frequently tiring and occasionally boring. Still, I’ve found it hugely rewarding. There has been the sheer bliss of spending days outside in the country, by the sea — and far from the noisy, frantic bustle of urban life and digital distraction. Here, in this decidedly analogue world, I’ve had the satisfaction of seeing physical changes as a result of my efforts — whether it’s a pile of logs I’ve cut, or a ditch that I’ve dug.

Much as I love my writing day-job, I’ve relished being away from a screen, doing a day’s work with my body, not my mind. This way of life is new, but at some deep, wordless level, profoundly familiar. Maybe I’ve been communing with all the generations before me who worked the land — as recently as my late grandfather. When duty called in World War 2, he, a pacifist, took up plough and tractor instead of gun and tank, helping to feed wartime Britain.

Me planting juniper might not be as noble. But still, it’s a way of being a bit closer, a bit more connected to the parts of me that were formed by the past. The parts of me most at home in an outside, rural, analogue world.

Unplug and connect with nature at Tankwa River Lodge

Eat, drink and lounge to your heart’s content no matter the weather at this 300-year-old Karoo homestead, writes Alexander Mattews
Life
8 months ago

Why Mauritius was named golf destination of the year

Is your green salad really green?

Why Mauritius was named golf destination of the year

Is your green salad really green?