The wreck of the Barca Nostra, which sank in 2015 with the loss of 800 migrant lives, haunts the 2019 edition of the Venice Biennale. Picture: GETTY/SIMONE PADOVANI

Huge and desolate, it looms into view as you turn towards the Arsenale basin; the gashed, rusty blue hull of the boat of death in which 800 migrants lost their lives. The Tunisian fishing vessel sank in 2015, was recovered from the seabed and brought to rest in Sicily. On Monday it arrived in Venice’s commercial port, crossed the Giudecca canal and entered the former Arsenale shipyard to become an art installation: Christoph Büchel’s project “Barca Nostra” — silent, ghostly, the most haunting thing in town. Seconds away, collectors’ yachts, sleek and glossy, parade outside the Giardini.

The 2019 Venice Biennale is a passage of unforgettable, stark contrasts, cacophonies and whispers, light and darkness: visual dramas laying bare sociopolitical faultlines as no other international art event can. That is especially so in this edition: for the first time in years, the main exhibition, Ralph Rugoff’s May You Live in Interesting Times, is entirely contemporary, with almost all works made since 2010, and nearly half the artists aged under 40.

It is a high-risk strategy — no classic achievements to hide behind — yielding extremely varied results in the quality of individual pieces. But as a declaration of art’s engagement with present realities, it is persuasive, and to encounter the best young artists pushing forward traditional forms in this context enthrals.

Augustas Serapinas, 28, who lives and works in Vilnius, has created in Vygintas, Kirilas & Semionovas the show’s most beautiful sculpture: a brutalist ruin of building blocks constructed in material taken from a former Soviet nuclear power plant in Lithuania.

Among Rugoff’s established artists, real ambition is announced in the global scope of works pulling local resonances together. In the Arsenale, housing the more potent installations, Christian Marclay’s impressive new 48 War Movies”layers movies featuring conflicts — from the American civil war to Iraq — on top of each other with just the outer edge of each visible, and all the soundtracks playing simultaneously, on shrieking infinite repeat: chaotic and endless, as war itself.

Pass from here through a black curtain and you stand among soft disembodied voices chanting in Arabic, Hindi and Russian through microphones suspended in a lanterned grid resembling a dungeon. Shilpa Gupta’s For, In Your Tongue, I Cannot Fit commemorates 100 imprisoned writers across the millennia, the title coming from the 14th-century Azerbaijani poet Nesimi.

In the Ghana Pavillion, Shilpa Gupta’s ‘For, In Your Tongue, I Cannot Fit’ commemorates 100 imprisoned writers across the millennia. Picture: GETTY/LUCA ZANON

History, despite Rugoff’s insistent present tense, remains an animating force in those pieces which most evocatively express what the world feels like now. Sun Yuan and Peng Yu’s Dear stands out within the Arsenale interior: a large silicon white chair, in imperial Roman style, raised and enclosed in a glass cage like a throne.

Francis Bacon’s caged popes screaming on their thrones spring to mind, but this chair’s occupant is a black rubber hose activated every few minutes to whip the cage in a frenzy, hissing and scratching the surfaces, until, exhausted, it collapses in a coiled heap — the exercise of power as violent, frustrated, futile. Sun and Peng also show the compelling Can’t Help Myself, another caged robot shovelling and sweeping a bloodlike fluid which keeps oozing back, impossible to cover up.

Rugoff imposes no themes: his opening salvo, cloaking the Giardini façade in rising steam — Lara Favoretto’s Thinking Head — advocates bewilderment, positing art as today’s equivalent of the medieval mystic work The Cloud of Unknowing, where to unthink familiarities is to see afresh. It is an upbeat position: Rugoff is less confrontational than the late visionary Okwui Enwezor, curator of the Biennale’s central exhibition in 2015. But, sharing Enwezor’s seriousness of purpose, Rugoff’s show is far more gripping than Christine Macel’s lightweight Biennale in 2017.

What emerges in the broadest sense from Rugoff’s “interesting times” is a shipwreck of political and cultural stabilities — migrant tragedies, proliferation of repressive regimes, new inequalities. These subjects dominate the mixed offerings at the national pavilions, although the best share determined optimism and resistance.

Misery, however, reigns atop the Giardini avenue, prestigious sites of the British, French and German pavilions, redolent of the world order when the Biennale began in 1895. Sic transit . . . For Britain, Cathy Wilkes’s sparse domestic installation of mannequins, lace scraps, diminutive vases of flowers, washing-up bowl and fragments of plastic limbs, is a joyless meditation on austerity Britain, growing ever smaller in global significance. It is at once self-righteous and meant to underwhelm, not a place you want to linger. Nevertheless, Wilkes’s dignity, restraint and coherence set her apart from her immediate neighbours. 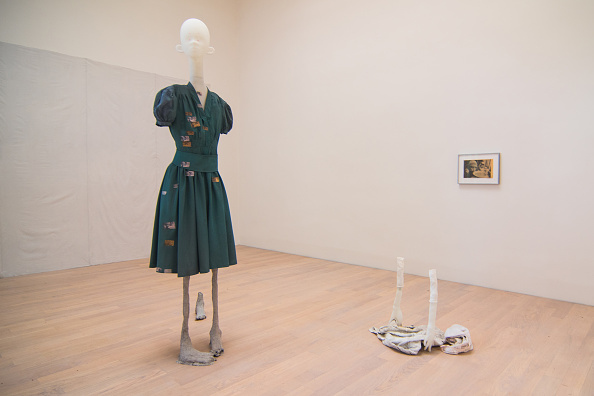 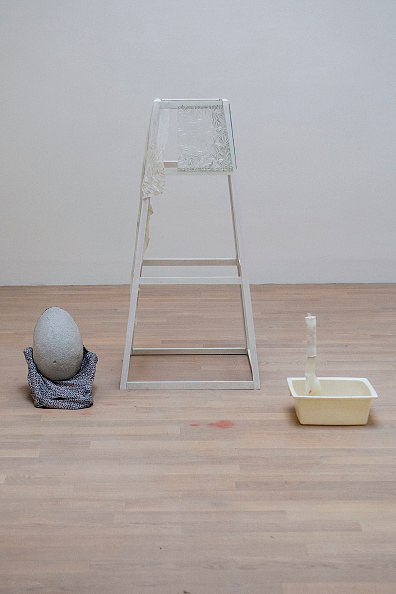 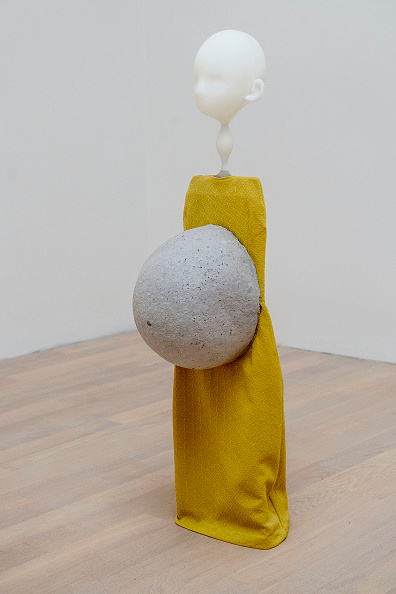 To the right, Natascha Süder Happelmann (a pseudonym questioning German identity and immigrants’ desire to assimilate) reduces urban forms to meaningless rubble — consistently, German self-hatred bursts forth in this Nazi-built pavilion. To the left, in the French pavilion, Laure Prouvost recounts her journey to Venice in a twittering adolescent film, supplemented by objects as souvenirs. It is 2019’s single worst, most self-indulgent pavilion, its watery motifs and jaunty marine title Deep Sea Blue Surrounding You an affront to Büchel’s memento to suffering moored on the Arsenale.

For the most troubled countries, bearing witness is the achievement. For Iraq at Ca’ del Duca, a dead soldier cast from clay, shrunken, skeletal, coated in a parodic skin of medals, lies in a mashouf, the ancient Sumerian boat still used in Iraqi marshes, in Serwan Baran’s The Last General. The pavilion fronts the Grand Canal, which becomes in the imagination the waterway on which this little burial ship will travel to the afterlife.

Serwan Baran’s ‘The Last General’, a dead soldier cast from clay, is shrunken, skeletal and coated in a parodic skin of medals. Picture: GETTY/SIMONE PADOVANI

Eloquent too are the absences. Algeria withdrew just weeks ago. And although Venezuela’s exhibition is listed in the catalogue, no artists arrived. A 1950s cuboid masterpiece in pebbled concrete and glass designed by Carlo Scarpa, it stands dark and closed next to the Russian pavilion’s bright cupolas: a warning that sometimes art cannot find a way through politics. Yet these absences serve to highlight the rich diverse voices, notably Ghana’s inaugural pavilion and India’s return, which have made it here against tough odds.

Zanele Muholi: photographer Muholi is one of the country’s most recognised, awarded and widely exhibited artists. Her work deals with issues of LGBTQ+ representation and identity. Muholi was recently acknowledged as the most powerful and visible female artist in SA and will have a major solo exhibition at Tate Modern in London in 2020.

Kemang Wa Lehurele: Winner of the Standard Bank Young Artist Award for Visual Arts in 2015, Wa Lehurele’s installations, which combine sculpture, drawing and video, have been noted for their complex explorations of issues around the legacy of SA’s violent history and its consequences for the postapartheid generation.

Curated by Nkule Mabaso and Nomusa Makhubu, the South African pavillion is organised under the title: “The Stronger we Become” and features the work of three artists:

Tracey Rose: Known predominantly for her performance work, Rose’s long career in the visual arts also includes video, installation and photography, and explores issues of identity and the politics of gender, sexuality and race. She participated in the 2nd Johannesburg Biennale and was included in the main exhibition at the Venice Biennale in 2001.

Dineo Seshee Bopape: Winner of the 2017 Standard Bank Young Artist Award for Performance Art, Bopape’s complex and layered installations and performances centre on the artist’s preoccupations with memory, history and issues of sexual and gender identity. She participated in last year’s Berlin Biennale where her video work focusing on the rape trial of former president Jacob Zuma was one of the highlights of the exhibition.

Mawande Ka Zenzile: Known for his political pop-culture paintings and the often controversial and anarchic performances that accompany his shows, Ka Zenzile’s practice has incorporated a variety of mediums to interrogate issues of identity and the relationship between artistic practice and the academy.

In praise of those who bear the nation’s baggage

Through his rope sculptures, Rihlampfu explores the labour intensive work and the psychology behind what drives some individuals to keep moving ...
Life
9 months ago

CHRIS THURMAN: Guggenheim for five-year-olds, or the hybrid as political ...

THEATRE REVIEW: The less good idea of taking epics from hours to minutes

CHRIS THURMAN: Guggenheim for five-year-olds, or the hybrid as political ...

THEATRE REVIEW: The less good idea of taking epics from hours to minutes