Even if there is a pickup in sales associated with Black Friday the overall level of retail spending is lacklustre, says economist

Annual retail sales slacked off in October, hinting at a softening in the recovery that followed July’s civil unrest, and comes as SA faces off against the Omicron-spurred fourth wave of the pandemic.

Retail sales slowed to 1.8% year on year in October from the previous 2.1%, according to data released by Stats SA on Wednesday, slightly off the median forecast for 1.9% of economists surveyed by Bloomberg.

The official figures, however, have yet to reflect the outcomes of festive season shopping and the gearing up to Black Friday during the month of November, which typically offers the sector a boost.

The retail sales figures follow the worse-than-expected third-quarter GDP numbers released on Tuesday that reflected the strain consumers are under as confidence remains shaky and joblessness has reached record highs.

Household consumption expenditure, which accounts for about two-thirds of GDP, shrank a seasonally adjusted 2.4% in the third quarter, its worst performance since the second quarter of 2020 when SA was in hard lockdown.

Though it could be argued that October’s slowdown partly reflected consumers’ “holding-back” in anticipation of Black Friday deals, it “does not explain the softening trend overall”, said Stanlib chief economist Kevin Lings in a note. 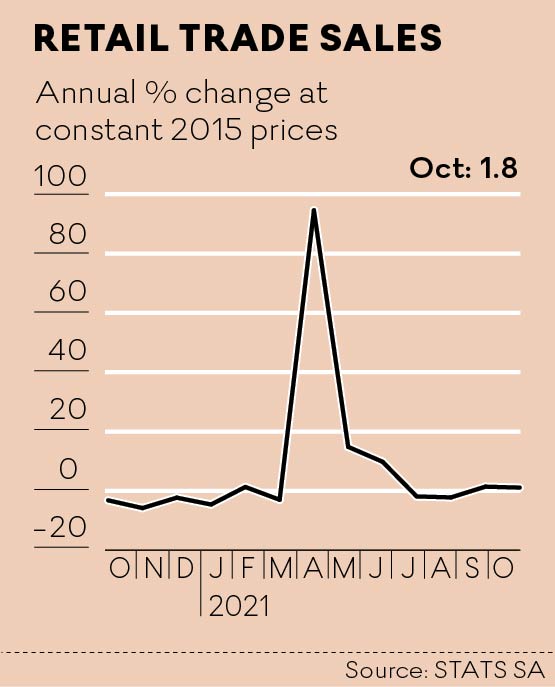 “Retail activity has clearly lost momentum over the past six months,” he said.

“This would suggest that even if there is a pickup in sales associated with Black Friday, the overall level of retail spending remains lacklustre and disappointing. This, most likely, is largely due to falling levels of employment, which is proving extremely difficult to turn around,” said Lings.

Nevertheless, some initial data on Black Friday sales suggests an improvement on 2020. FNB said recently that it processed transactions worth more than R2bn on its Speedpoint machines,  a 19% increase year on year.

Meanwhile, FNB cardholders made purchases in excess of R2.5bn on Black Friday, an increase of 15% compared with 2020. Its statistics also show heightened shopping activity beyond Black Friday, with transactions for the month of November up 25% compared to the same month in 2020.

Investec economist Lara Hodes warned that consumers remain financially constrained, and many have not recovered from the effects of the pandemic. Alongside record unemployment — which reached 34.9% in the third quarter — “elevated administered prices especially electricity and fuel costs continue to dilute disposable incomes”, Hodes said.

Retailers continue to face myriad challenges, she said, including persistent global supply-chain constraints that have resulted in longer lead times and stock shortages that have driven up input costs.

While Black Friday shopping may yet boost November’s print, the rise of the Omicron variant and the reinstatement of travel bans to SA by many important tourist markets, is likely to weigh on retailers during the seasonally significant festive period, Hodes added.

Alongside constrained consumers, the mood among businesses has also soured. Ahead of the retail sales data — business confidence figures from the SA Chamber of Commerce and Industry showed a decline in sentiment in November from the previous month.

The chamber was critical of the manner in which the initial announcement on the Omicron variant was made, saying it sparked greater concern and negatively affected the business climate.

“Hopefully, the rushed decisions by other countries on travel restrictions will be tempered as more information on the Omicron variant emerges,” it said.

ECONOMIC WEEK AHEAD: GDP data expected to show the effects of July’s unrest

Economy’s performance will take centre stage in a week that also features retail sales, as well as mining and manufacturing production data
Economy
1 month ago

Sales bounced back 5.1% in September and 4.9% in August after a calamitous fall of 11% from June to July
Opinion
1 month ago
Next Article