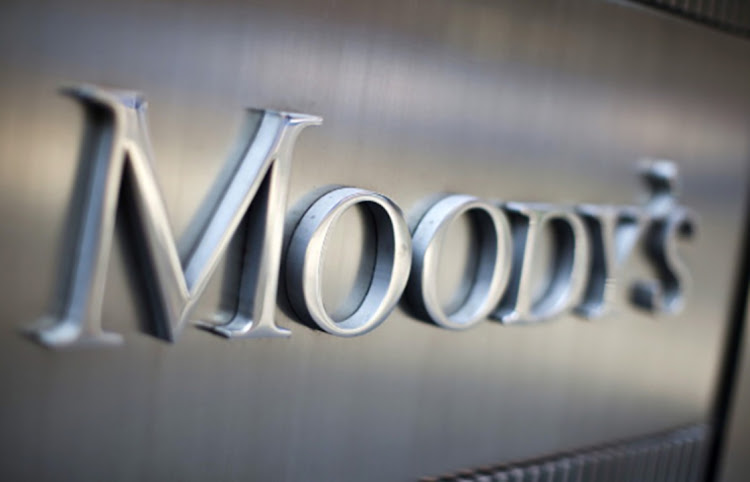 Moody's Investors Service signage is displayed outside of the company's headquarters in New York, US. Picture: BLOOMBERG VIA GETTY IMAGES/Ramin Talaie

Ratings agency Moody’s Investors Service has downgraded two SA development finance institutions, on the lower likelihood of the government being able to support these state-owned entities should they run into trouble.

Rising fiscal pressures — worsened by the economic downturn and state Covid-19 support mitigate the effects of the coronavirus outbreak — suggest that the state “may not always be in a position to provide timely and adequate support” to the Development Bank of Southern Africa (DBSA) and the Industrial Development Corporation (IDC), Moody’s said last week.

Recent events such as the government’s denial of a funding request from embattled national carrier SAA in April and the debt default by agricultural lender the Land Bank, also informed the decision, Moody’s said.

The IDC’s and the DBSA’s long-term foreign currency ratings were cut from Ba1 to Ba2 — two notches below investment grade — with both on a negative outlook.

Moody’s said that though support may still be available to these institutions, its decision to downgrade captured “the risk that support may not be timely or of the magnitude required”.

In the report Moody’s noted that both companies had strong capital buffers, but faced “potentially higher asset risks and challenges arising from the capital markets’ dislocation triggered by deteriorating macroeconomic conditions”.

The DBSA said that though it was “disappointed”, by the move, it remained “exceedingly well capitalised, with no requirement for shareholder support envisaged in the foreseeable future”.

The DBSA’s treasury was working to increase the bank’s liquidity buffers, to enable it “to respond positively to the burgeoning funding requirements of our core client base”, it said. To this effect, the lender said it was finalising “a number of further funding lines with its traditional lender base” which include global development finance institutions and commercial banks.

The DBSA said it was confident it will be able to raise the necessary funding for it to play its expected role during this “protracted market contraction”.

The budget deficit, as a share of GDP, is now expected to rise to 15.7%, while the state’s debt levels will reach 81.8% of GDP by the end of this fiscal year.

In the budget, the Treasury said that market volatility could “limit the ability of state-owned companies to borrow in capital markets and service their debt obligations”.

Moody’s, as well as its peer Fitch Ratings, expressed scepticism last week that SA’s aims to reduce debt, which includes R230bn in spending cuts in the coming two years, would be achieved.

In the budget, the Land Bank, which holds almost 30% of SA’s agricultural debt, received R3bn in emergency liquidity funding while its restructuring plans are being finalised.

Though the state has reiterated its wish to support SAA, which is in the throes of a fraught business-rescue process, no additional funding was announced in the budget.

The IDC did not respond to a request for comment.

Tito Mboweni says the Treasury is supporting the Land Bank, which is looking for a R3bn liquidity finance bridge as it crafts a long‐term plan
National
10 months ago

Battle with debt at heart of Mboweni’s special budget