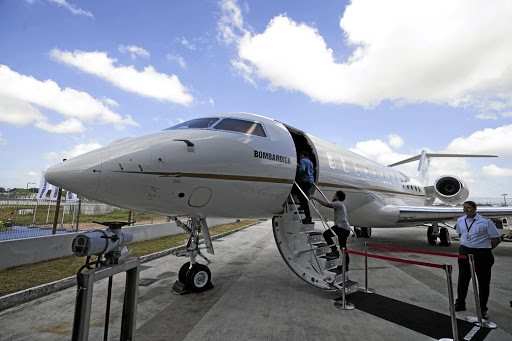 The Bombardier Inc Global 6000 business jet, on display during a media event at Seletar Aerospace Heights in Singapore before the pandemic. Picture: GETTY IMAGES/NICKY LOH

Montreal-based Bombardier now expects 2022 free cash flow of more than $515m, compared with its earlier forecast of over $50m, as orders surge. Analysts on average were expecting full-year free cash of $181.46m, according to estimates from Refinitiv.

Business-jet makers see strong demand for planes and aftermarket services, as private flying in the key US market remains above pre-pandemic levels and Asia recovers, but supply-chain constraints are putting pressure on deliveries.

“We do face, what I would call, a crosswind on supply chain,” CEO Eric Martel told a call with analysts.

Bombardier reiterated plans to deliver more than 120 jets this year despite the problems.

“The greater than 120 takes into account some of the risk we have ahead of us mainly driven by engines right now,” Martel said.

He later told reporters the company is working with multiple engine-makers to address “challenges”.

Asked about industry chip shortages, Martel said there had been “some impact”, such as the delivery of spare parts for the company’s services business, though efforts were being made to mitigate any effect.

Bombardier reported improved margins while its backlog rose by 37% on an annual basis to $14.7bn.

Despite strong demand, there are early signs of a calming market with some brokers reporting a slight uptick in pre-owned aircraft.

The company’s adjusted loss per share narrowed to 48c, in line with analysts’ expectations, from a loss of $1.49 per share a year earlier.

Bombardier stock was up 6% in late morning trading, after jumping 12% earlier in the day.