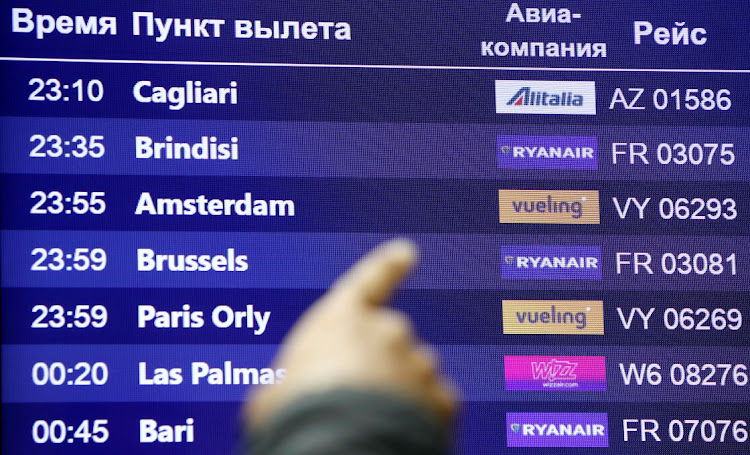 The arrivals board shows the last ever Alitalia flight, number AZ1586 from Cagliari, before its arrival at Rome’s Fiumicino Airport on the eve of the Italia Trasporto Aereo takeover, in Rome, Italy, October 14 2021. Picture: REMO CASILLI/ REUTERS

Italy’s new flagship airline takes to the skies on Friday with the travel industry still reeling from the coronavirus crisis and low-cost rivals targeting its home market in a bid to lure away passengers.

The tough operating conditions mean Italia Trasporto Aereo (ITA) faces trying times from day one as it replaces fallen national icon Alitalia, which ended flights on Thursday after decades of losses and numerous brushes with bankruptcy.

State-backed ITA will use planes from Alitalia and be armed with its well-known name, after securing the brand’s purchase for €90m on the eve of its debut. But the new airline will employ only about 2,800 of its predecessor’s 10,000-plus staff, operating a simplified network to keep down costs and help it turn a profit once demand recovers from the pandemic.

Leading the start-up is chair Alfredo Altavilla, who made his name as a close aide to Sergio Marchionne in his turnaround of carmaker Fiat and its subsequent purchase of US-based Chrysler. The executive was handpicked for the airline role by Italian Prime Minister Mario Draghi’s government.

ITA will initially operate 52 planes, about half the number at Alitalia, increasing to 78 next year. Growth will be spurred by an outline deal last month for 59 purchased or leased jets, all of them Airbus SE models, helping to trim crew expenses by maximising interoperability.

Even before the challenge of competing for customers, the new airline has endured a tortuous journey to reach its launch.

On the one hand, ITA has been at pains to show it will be financially self sufficient and represent a clean break from Alitalia in order secure regulatory sign-off. Margrethe Vestager, the EU’s antitrust chief, finally gave her backing last month, while outlawing subsidies paid to Alitalia.

At the same time, staff have been up in arms over ITA’s reduced workforce and new contracts, staging protests in Rome. The company has inherited only direct airline employees from the old Alitalia, with the group’s maintenance and ground-handling operations subject to a tender offer as a result of the EU settlement.

Yet the business saw value in taking back the Alitalia name — at a discount from the original €290m asking price — after Vestager insisted it be sold to the highest bidder. The Alitalia identity still has resonance and is seen as a useful marketing tool in international markets.

The public has meanwhile been lukewarm in its backing for a new carrier set to receive €1.3bn  in government funds on top of more than €5bn splurged on Alitalia. The company first entered bankruptcy in 2008, and has been kept on life support with taxpayer proceeds.

Italians have suggested the money should be funnelled into healthcare or education instead. But still, the emotional pull endures for a brand that at one time was synonymous with the glamour of “La Dolce Vita” and Hollywood stars jetting off to a Roman holiday.

It will be up to ITA to carve out its place in a market that’s already well-served. Global airlines offer plenty of long-distance flights from Rome and Milan, while those cities and others have good European links through a host of carriers including Ryanair Holdings, easyJet  and Wizz Air Holdings. The discounters boosted their presence in Italy with the easing of Covid-19 travel curbs, even as the government haggled with Brussels.

The government, though, says that Italy needs its own network airline to support tourism in what is the world’s fifth-most visited country.

The company is likely to “go badly, as all the other Italian carriers before”, Wizz CEO Jozsef Varadi said in an interview on Tuesday.

“I’m not seeing any change here, that’s a government-owned entity,” he said. “And they are basically inheriting the labour context of Alitalia and all the inefficiencies of that airline. You can’t expect much from those guys.”

Italy’s economic development minister, Giancarlo Giorgetti, said in June that ITA must find a partner to flourish, with Delta Air Lines. CEO Ed Bastian saying this month that discussions are under way over a possible alliance. Delta’s existing North Atlantic partnership, of which Alitalia was a member, includes Air France-KLM and Virgin Atlantic Airways.

Even ITA’s own projections see years of struggle ahead before the carrier starts making money.

According to a revised business plan presented to legislators this month, ITA no longer expects to report a profit by 2023, envisaging instead a loss before interest and tax of €33m, before clawing its way into the black the following year.

“It’s very difficult to make profit on domestic markets, particularly if you’ve got a combination of Ryanair and easyJet, and presumably Wizz Air at some point, eating your lunch,’ said Peter Morris, chief economist at aviation consultancy Ascend by Cirium.