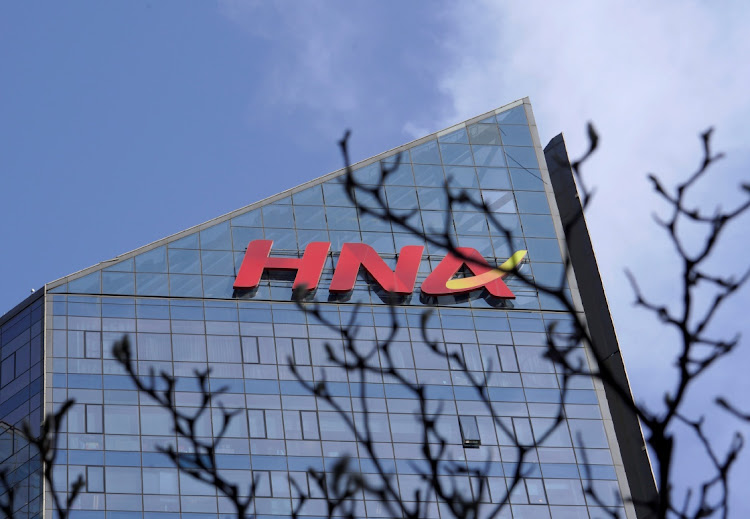 A HNA Group logo is seen on the building of HNA Plaza in Beijing, China. Picture: REUTERS/JASON LEE

Beijing/Shanghai — China’s HNA Group will receive strategic investment of 38-billion yuan ($5.88bn) after its restructuring, which will go to eleven of its entities including its flagship carrier Hainan Airlines, two sources said on Monday.

Gu Gang, the group’s party secretary and leader of the government-led working group addressing HNA’s liquidity issues, disclosed the investment at a meeting of its creditors, said the two sources, who are familiar with the meeting’s discussions.

He did not elaborate on where the investment was coming from but said about 25-billion yuan of the strategic investment would go to Hainan Airlines to replenish its cash flow, they said, asking not to be named because they were not authorised to speak to the press.

HNA did not immediately reply to a request for comment.

Hainan Airlines said in a separate statement on Monday that it would use funds from strategic investors and future operating income to repay the debts of the airline and of the other 10 entities.

In the 2010s, HNA used a $50bn global acquisition spree, mainly fuelled by debt, to build an empire with stakes in businesses from Deutsche Bank to Hilton Worldwide.

But its spending drew scrutiny from the Chinese government and overseas regulators. As concerns grew over its mounting debts, it sold assets such as airport services company Swissport and electronics distributors Ingram Micro to focus on its airline and tourism businesses.

HNA was placed in bankruptcy administration in February and a working group created by the government of its home province of Hainan has been addressing the company's liquidity problems.

Late on Friday, the company said its chair and CEO had been detained by Chinese police over suspected criminal offences.

Gu also told Monday's meeting that Hainan Airlines had worked out a debt restructuring plan with major domestic and overseas aircraft lessors, which had given substantial exemptions on its debts, the sources said.

Hainan Airlines’ interest-bearing liabilities will fall to 60-billion yuan after the reorganisation, its total assets will stand at 170-billion yuan and its debt ratio will lower to 81% after the debts are cleared, they said.

A document detailing HNA’s restructuring plan had said that creditors of the 11 entities have reported that they are owed 397.2-billion yuan ($61.43bn) of unpaid debt. Only 161.29-billion yuan of this has been recognised by the court and will enter the restructuring process.

Unsecured creditors that are owed no more than 100,000 yuan ($15,465) in principal debt will be repaid in full. Any debt above that level will be paid partly by HNA and other parties, and partly in Hainan Airlines’ shares, according to a document seen by Reuters.

The creditors’ committee still must approve the plan, the document said.