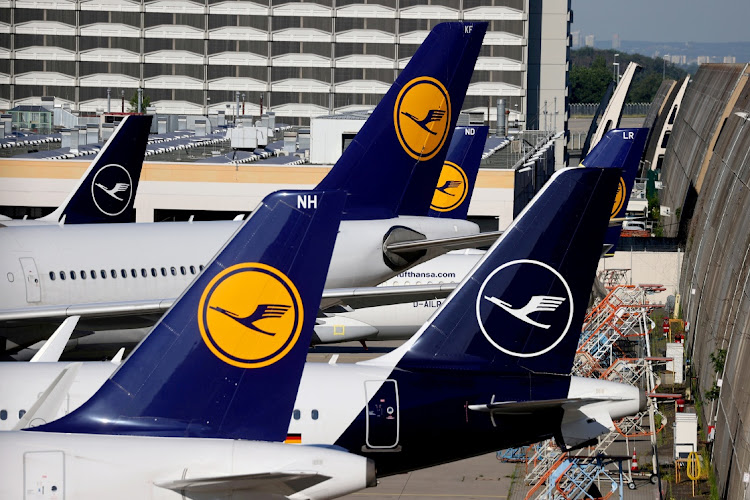 Lufthansa aeroplanes are seen parked on the tarmac of Frankfurt Airport in Germany. Picture: REUTERS/KAI PFAFFENBACH

Frankfurt am Main — Deutsche Lufthansa struck a more pessimistic tone after reporting the biggest loss in the airline’s history, saying it might need until the middle of the decade to recover from the coronavirus pandemic that’s ravaged the industry.

Europe’s biggest airline group warned on Thursday that it may be able to operate only 90% of its pre-pandemic capacity by then, a sign of deteriorating confidence in a revival after Lufthansa previously suggesting the market could recover fully by 2024.

Lufthansa will struggle to make money on flights before the end of 2021 as it dials back capacity plans. Aeroplanes that are more than 25 years old may be decommissioned, adding to dozens of earlier retirements.

CEO Carsten Spohr said there could still be a revival of passenger traffic this summer, but only if enough vaccines are given.

“We expect demand to pick up again as soon as restrictive travel limits are reduced by a further rollout of tests and vaccines,” Spohr said in a statement. “Internationally recognised, digital vaccination and test certificates must take the place of travel bans and quarantine.”

Network carriers such as Lufthansa have seen the long-haul markets on which they depend almost wiped out by the pandemic. These routes, which rely heavily on business travel, are expected to be among the last to recover.

Lufthansa said it’s able to rush back as much 70% of capacity in short order if demand picks up. It’s also expanding its low-cost long-haul business to target a revival in tourism as corporate travel takes longer to bounce back.

But more progress needs to be made on restructuring at the sprawling airline group, especially at the main German brand, Bernstein analyst Daniel Roeska wrote, after the company posted a record €6.7bn annual loss.

“While we can see tangible progress on labour in Swiss, Austrian, Brussels and Eurowings,” Roeska wrote, “Lufthansa mainline is still stuck at step 1 here with crisis agreements only. More needs to happen — and faster.”

Lufthansa’s reassessment of the hoped-for rebound comes with travel still largely locked down and the EU struggling to accelerate Covid-19 vaccine rollouts after a sluggish start.

Lufthansa now expects to deploy between 40% and 50% of its 2019 capacity levels this year, compared with a previous target of 40% to 60%. That’s bad news for profitability, given that it needs to operate with about half of available capacity to stem cash outflows.

Short-haul leisure specialists such as Ryanair and easyJet may reap an earlier rebound, especially if a faster vaccination rollout in the UK allows Britons to make a more rapid return to Mediterranean beaches.

The EU is three or four months away from issuing coronavirus immunity certificates, raising the prospect of another lost tourism season for the bloc’s aviation and hospitality industries, according to a briefing note circulated to national delegations in Brussels on Tuesday.

A delayed recovery raises the prospect of the German state retaining a major holding in Lufthansa for longer if it renders the carrier less able to repay borrowings. Lufthansa has tapped the government for €9bn, handing it a 20% stake in the company.

Lufthansa cut capital spending by two-thirds in 2020 and said the outlay on aircraft will shrink in future years as it cuts the fleet to 650 aeroplanes by 2023 from more than 750 at the end of 2020.

The airline’s cash outflow jumped from €1.2bn in the three months to end-September after new coronavirus lockdowns
Companies
1 month ago