Goldman Sachs is in talks with investors for refinancing of up to $9bn for the airline, insiders say 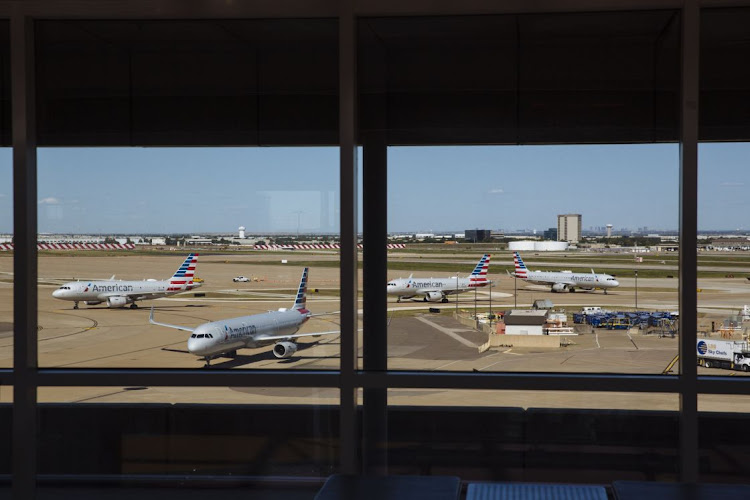 American Airlines jets sit on the tarmac at Dallas/Fort Worth International Airport in Dallas, Texas, the US. Picture: ANGUS MORDANT/BLOOMBERG

American Airlines Group is weighing a return to the debt market as soon as March to help pay back loans from the US government that have helped keep the company afloat through the pandemic.

Goldman Sachs Group, which last year helped United Airlines Holdings use its frequent-flyer programme to backstop new debt, is sounding out potential credit investors in a debt deal for American, according to people familiar with the matter. American, which backed a $7.5bn US treasury loan with its frequent-flyer programme, is considering doing the same with its new debt, said the people, who asked not to be named because the matter is private. Terms are still fluid and could change, they said.

American was in the first wave of carriers to tap billions of dollars in loans included in the $2-trillion Cares Act for economic relief from the pandemic. Goldman is in talks with investors for a $7bn-$9bn refinancing in the coming months for the Texas-based company, the people said. Discussions included the potential for a yield of 6%-7%.

Representatives for American and Goldman Sachs declined to comment.

The airline, which borrowed under both the government’s payroll support programme and a rescue lending package for carriers, is still deciding which of its government debt will be paid off in the refinancing, some of the people said.

With central banks still priming the economy with low interest rates, demand for higher-yielding debt has soared, and junk-rated companies have been rushing to the bond and loan markets to borrow. Borrowing costs for speculative-grade issuers dropped below 4% this week for the first time, according to Bloomberg Barclays index data.

American got another boost recently after its stock was swept up in a rally among heavily shorted equities being targeted by an army of traders on Reddit’s WallStreetBets forum, jumping as much as 31% during a trading session last month. Amid the trading frenzy, the airline announced plans to sell up to $1.1bn of shares.

American’s AAdvantage loyalty programme has an assessed value of $18bn-$30bn, American said in May, when it was negotiating with the treasury department to use at least part of the asset as collateral for the loans.

Acsa seeks adviser to get more out of its properties

The state-owned company wants to see how it can earn returns from its R7.7bn portfolio
Companies
4 months ago

The Dutch airline also says government plans to require all passengers and crew to pass a Covid-19 test before flying to the country will be ...
Companies
5 months ago
Next Article