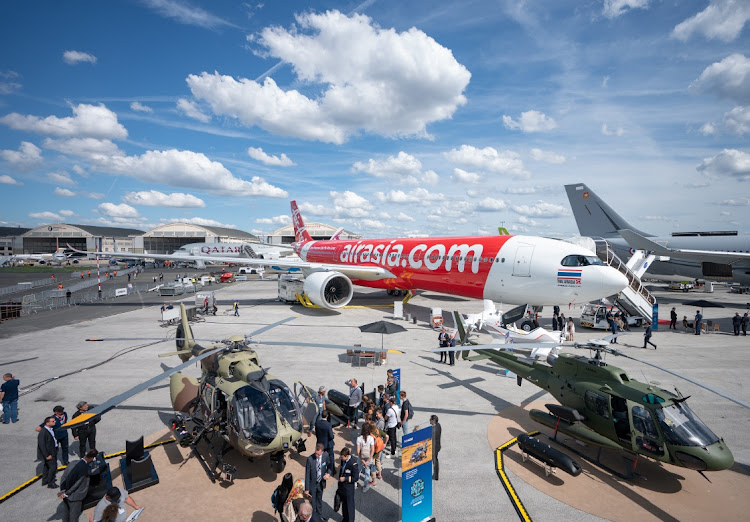 An Airbus A330 at an airshow in Paris, France. Picture: JASPER JUINEN/BLOOMBERG

Airbus SE has solicited engine ideas for a narrow-body jetliner in development, drawing a proposal for a new geared design from General Electric (GE).

GE’s preliminary proposal, disclosed in a court opinion, reveals previously unreported talks between the engine maker and Airbus for a “next-generation” aeroplane. The court decision was later sealed, indicating the high level of interest in what’s next for Airbus.

It is unclear whether the mooted aircraft would be a new model or an upgrade to one already in the company’s catalogue, such as the A320neo or A220 single-aisle jets. The court decision does not say when GE proposed the new engine, whether the plane might come to market, or how far along any talks are.

Airbus CEO Office Guillaume Faury has previously indicated that the firm’s next narrow-body will be a carbon-free design, with work under way on developing hydrogen-powered aircraft, though aviation watchers have also wondered whether a new conventionally fuelled plane might be in the offing.

“A new narrow-body would start with a kerosene-powered geared turbofan, but with scope to use new propulsion technologies as they appear,” he said. Such technology for a full-size airliner is unlikely to be ready before 2030, though a smaller regional aircraft could fly before then, he said.

Airbus shares traded 1% higher as of 9.02am in Paris, paring their decline this year to 29%. US rival Boeing has declined 33%.

Airbus is building an extra-long range version of its A321neo that will allow airlines to fly further with smaller, more efficient aircraft. The A320neo family now offers either LEAP 1A engines from a GE joint venture, or Pratt & Whitney’s PW1100G geared turbofan as options. The Neo, which stands for new engine option, is itself a more fuel-efficient version of the A320.

“GE Aviation continually reviews opportunities with airframers, including Airbus and Boeing, about engine technologies for the next generation of aircraft. The details of these discussions are confidential,” the US company said by e-mail.

Airbus similarly did not disclose the nature of any discussions. “We are in constant dialogue with our engine makers about the latest state-of-the-art technologies and ongoing innovations,” it said by e-mail. “There are many studies. Not all studies see the light of day.”

Cunningham said talks may be a “feint” by Airbus to pressure Boeing into moving early on a new narrow-body aeroplane before technologies are really ready. That could allow the European company to come in a few years later with a superior plane.

The US company’s single-aisle strategy was thrown into disarray by the grounding of its 737 Max, which rivals the A320neo, after two fatal crashes. The Max has only just been permitted to fly again and it is not yet clear if it will be able to compete effectively with the Airbus plane.

A new narrow-body would start with a kerosene-powered geared turbofan, but with scope to use new propulsion technologies as they appear.

GE proposed using a geared turbofan system it is developing, which it considered a “technologically preferred design for the next-generation narrow-body market,” the US Court of Appeals for the Federal Circuit wrote in an opinion on Wednesday.

Airbus and Boeing are confronting mounting pressure to curb carbon emissions, while the coronavirus pandemic has worsened a marketplace shift away from their largest and most profitable aeroplanes. The two compete intensely over new designs that are high stakes because of the long lead-times and deep pockets required to bring a model to market.

The same is true for enginemakers GE, Pratt and Rolls-Royce. The UK company is now considering a return to the single-aisle market, and has said it is in contact with Airbus about possible opportunities, while discussing a potential new single-aisle design contemplated by Boeing.

The disclosure about the GE-Airbus discussions came in a years-long dispute over geared turbofan patents held by Pratt, which is a unit of Raytheon Technologies. The mechanism — used for other aircraft in addition to the A320 family — allows the fan blades and turbine in an engine to rotate at different speeds for better efficiency.

Beginning in 2016, GE launched an attack against Raytheon’s patents on gas-turbine engines, claiming they were taking credit for decades-old technology developed by GE or for processes that were broadly known in the industry. In all, 33 petitions have been filed at a review board within the US Patent and Trademark Office, most recently in January.

GE has had mixed luck at the agency, including knocking out a patent for a way to set the gear ratio in an engine. In 2019, the federal circuit, which handles all patent appeals, ruled that merely being a competitor of Raytheon was not enough to give Boston-based GE the right to use federal courts to appeal against a different case it has lost at the agency review board.

To overcome that decision, GE had to provide information to show that it “is ‘now undertaking activities’ likely to lead Raytheon to sue it for infringement”. On Wednesday, the circuit held that GE has met that burden and could pursue its case.

Raytheon said it was disappointed with the appeals court decision and that it was evaluating its options. The case involves a single patent, Raytheon said by e-mail, and it has “many other patents covering its revolutionary new GTF technology”.

Its future depends on the recovery of engine flight hours and a shift to a post-carbon economy, but it's still a ‘great, great British company’
Companies
9 months ago

IndiGo has suffered 13 engine shutdowns during ascents in 2019, and all its A320neo aircraft now use a lower thrust setting after take off
Companies
1 year ago
Next Article

To make a small fortune, invest a big fortune in an airline

To make a small fortune, invest a big fortune in an airline