But Vijay Shekhar Sharma has defended the company’s prospects, encouraging employees — for four hours — to look past the first-day drop 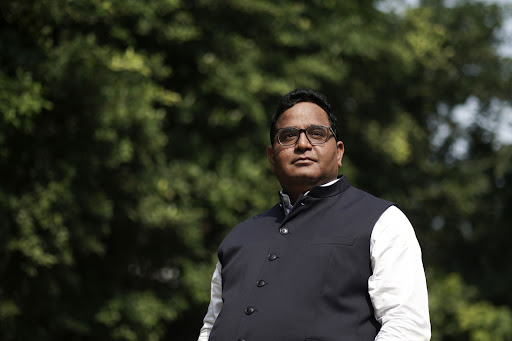 Shares of India’s pioneering digital payments start-up Paytm plummeted for a second day after its $2.5bn initial public offering, marking one of the worst debuts in history by a major technology company.

The stock fell about 13% on Monday after a 27% plunge in its debut on Thursday, cutting its market value to about $12bn. The drop has hit individual investors and global institutions such as BlackRock and the Canada Pension Plan Investment Board that had scooped up shares.

Paytm’s parent company, One 97 Communications, raised a record IPO sum, but its disastrous trading debut sparked criticism that the company and its investment bankers had pushed too hard in the offering. Founder and CEO Vijay Shekhar Sharma had persistently made clear that he wanted Paytm to surpass the long-standing IPO record set by Coal India in 2010. Indian markets were shut Friday for a holiday.

“Investors should wait a bit for the stock to settle down,” said Mohit Nigam, a fund manager with Hem Securities. “There is too much volatility and pessimism in the stock.”

Over the weekend, Paytm released financial details for the month of October, which includes the critical period ahead of the Diwali holiday. Gross merchandise value rose 131% to 832-billion rupees ($11.2bn) for the month, the company said. Loan disbursals, which analysts see as key to Paytm turning profitable, increased more than 400% to 6.27-billion rupees.

The stumble by India’s largest digital-payments provider may chill India’s stock-market boom, which had ranked among the world’s most frenzied. The IPO had been touted by some as a symbol of the country’s growing appeal as a destination for global capital, particularly for investors looking for alternatives to China.

Paytm’s IPO was managed by leading banks, including Morgan Stanley, Goldman Sachs, JPMorgan Chase, ICICI Securities and Axis Capital Holdings. They all either declined to comment or didn’t respond to requests for comment.

Critics have questioned Paytm’s prospects in recent months. While sales at its core payments and financial-services arm rose 11% in the year ended in March, overall revenue dropped 10% amid intensifying competition, the company reported in July.

Even before trading began, Macquarie Capital Securities (India) slapped the company with an initial “underperform” rating and a price target of 1,200 rupees, 44% lower than the IPO price.

“Considering Paytm’s heavily cash-burning business model, no clear path to profitability, large regulatory risks to the business and questionable corporate governance, we believe the company is overvalued at the upper end of price band of 2,150 rupees,” analysts Suresh Ganapathy and Param Subramanian wrote in the note.

Others see promise in the Paytm model if it builds on its expanding customer base.

“Paytm is a strong company technology wise but they need to expand into finance side of the fintech business,” said Deven Choksey, a strategist at KRChoksey Investment Managers. “Just focusing on technology will not work.”

CEO Sharma has defended the company’s prospects. He rallied employees during a four-hour town hall and encouraged them to look past the first-day drop, according to employees who participated.

Sharma invoked Elon Musk and Tesla, reminding employees that the electric vehicle maker’s stock used to be among the most-shorted in the world. But the company overcame years of struggle to become one of the most recognised brands globally, he said.

The slump is “no indicator of the value of our company,”, he said in an interview with Bloomberg News on Thursday. “We are in it for the long haul. We’ll put our heads down and execute.”