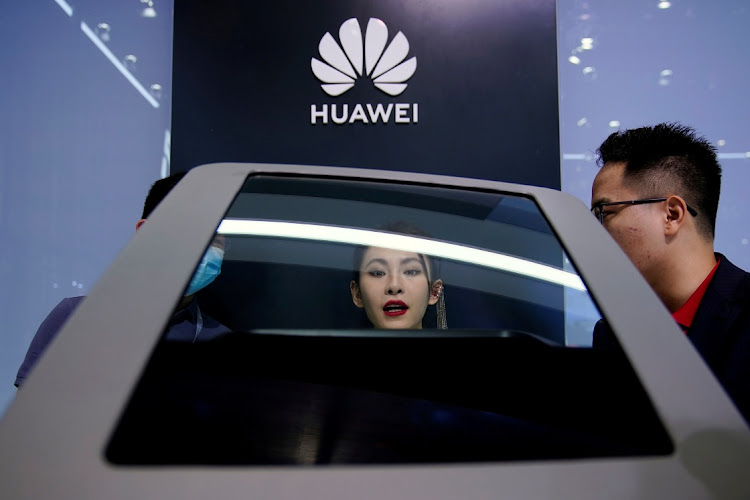 People check a display near a Huawei logo during the Auto Shanghai show in Shanghai on April 19 2021. Picture: REUTERS/Aly Song

Huawei Technologies’ sales shrank for a fourth straight quarter as the Chinese technology giant’s overseas smartphone and telecom-equipment businesses continued to struggle following a US blacklisting.

Revenue fell 38% to 135.4 billion yuan ($21.2bn) in the three months ended in September, according to Bloomberg calculations based on nine-month and first-half figures provided by Huawei. Sales for the January-September period reached 455.8 billion yuan, with a profit margin of 10.2%, the Shenzhen-based company said. Third-quarter net income was 15.1 billion yuan based on that profit margin.

The pace of the sales decline was on par with the previous quarter, signalling the slide isn’t accelerating. The results were in line with Huawei’s forecast, rotating chairperson Guo Ping said in the statement. The performance of Huawei’s business-to-business units remain stable, while the consumer divisions have been “significantly impacted,” according to Guo.

Years of US sanctions have strained Huawei’s smartphone business, which was once the biggest source of revenue before a series of Trump-era trade bans cut the company off from key chipsets made by an array of suppliers from Qualcomm to Skyworks Solutions . One of the bans also forbids contract semiconductor plants from making silicon designed by Huawei.

The company is exploring emerging opportunities in areas from smart mining to electric vehicles. In software, Huawei expects its in-house operating system HarmonyOS to connect as many as 200-million devices by the end of this year, a senior executive said last week.

Last month, Huawei CFO Meng Wanzhou, the daughter of founder Ren Zhengfei, was released by Canadian authorities after a nearly three-year house-arrest during which she battled extradition to the US on fraud charges.

Group posts 83% sales growth, which is ‘related to Huawei’s decline in high-end segment’
Companies
8 months ago