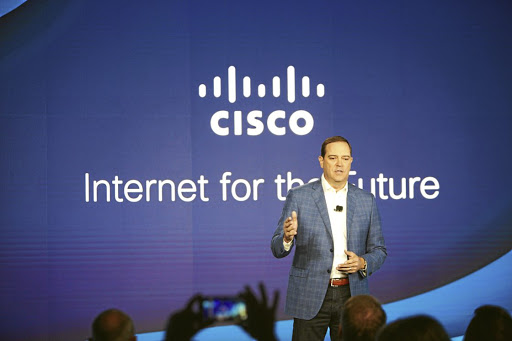 For a fleeting moment in the year 2000, Cisco Systems was the world’s most valuable company. Then the networking company failed to capitalise on fundamental shifts in computing that followed the dot-com crash, and it fell out of the top tier of US technology companies. Cisco’s market value is now about half its peak, and less than 10% the level of today’s most valuable company, Apple.

Cisco is hardly a failure. It produces billions of dollars in annual profits and is generally regarded as stable and well-run. But investors feared that its steady operations could lead to a slow-motion descent into obsolescence in an industry that can be brutal to anyone who falls a half-step behind.

The best example of a tech giant stumbling and then regaining its dominance is probably Microsoft, and analysts regularly hold it up as a role model for Cisco. Microsoft’s decline, which began about the same time as Cisco’s, was largely the result of a progression of disappointing products.

That began to change in 2014, when new CEO Satya Nadella started selling tonnes of copies of popular software such as Excel and Word as subscription services rather than one-time purchase products and built a formidable cloud computing division. Microsoft is now the only US company other than Apple with a market value of more than $2 trillion.

Chuck Robbins has held his job as Cisco’s CEO just one year less than Nadella. In recent months, he’s begun to insist that his company has finally reached its inflection point. Cisco acknowledged years ago that it had failed to capitalise on the chance to build the initial infrastructure for cloud computing, says Robbins, and responded with a significant, if slow-developing, overhaul of its strategy. “We were going to build technology for the next transition,” he says. “We did that. Now we’re seeing the benefit.”

Cisco’s initial problem was partially a lack of flexibility. When Amazon, Google and Microsoft began building cloud computing data centres, they wanted components, software and machines that were tailored to their needs. Cisco insisted on selling the same expensive, uncustomisable equipment that was always the core of its business. The burgeoning cloud companies were only too happy to take their business elsewhere.

Robbins can point to significant changes during his six-year tenure. Cisco has made a string of acquisitions that have turned it into one of the top 10 software companies in the world by revenue. Software and services have surpassed hardware and now make up more than half of Cisco’s revenue. Its expected future revenue for outstanding fees from these products totals $30bn.

Cisco forecasts it will outpace investors’ expectations for growth in the coming years. Robbins recently predicted the company’s revenue would grow 5%-7% every year until fiscal 2025. Investors, though, are struggling to understand Cisco’s story. In part this is a reflection on the complexity of its offerings. Cisco sells conferencing software, networking monitoring and management software, various types of security products, chips, Wi-Fi routers and Wi-Fi management software, along with its traditional array of hardware.

An online listing of its software products has 191 entries, from the straightforward “Video Analytics” to the mystical-sounding “Cisco Fog Director”, which controls computing for remotely connected devices. “It’s really hard for people to get their head around where the software is coming from and how it’s all working,” concedes Robbins.

This confusion could also deter customers, says Simon Leopold, MD at Raymond James. “If they don’t understand, they can’t buy it,” he says. Cisco needs “to figure out how to simplify the narrative”.

Cisco’s breakdowns of its finances sometimes seem to obscure rather than illuminate its attempts to remake itself. Take its rebound in sales to the giant internet companies, where it boasts 160% growth in its most recent quarter. This seems less central to Cisco’s story once you realise that it boils down to just 6% of its overall revenue, according to Leopold.

Cisco also missed an opportunity to have its own pandemic consumer hit when Zoom Video Communications surpassed Webex as the household name for videoconferencing. “Webex was the premier brand,” says Erik Suppiger, an analyst for JPM Securities. “The perception now is that Zoom has considerable market share advantage.”

Cisco pushes back on this, saying Webex is the favoured choice of corporate clients, who value its stability and security, but the company doesn’t report metrics that allow for a direct comparison.

Robbins says the continued development of cloud computing presents Cisco with the chance to make up for lost ground. That requires the company to come out ahead of the array of companies eyeing the same opportunities for themselves. Robbins knows that people want to compare his company to Microsoft, but he says Cisco’s turnaround may be even trickier. “The challenge that we have,” he says, “is that no major technology hardware company has gone through a transformation like this.”

Zoom's next act a threat to rivals

Scrap metal plan does not add up as a few oligarchs will end up controlling the ...

Workplace, home space, or a bit of both?

Scrap metal plan does not add up as a few oligarchs will end up controlling the ...

Workplace, home space, or a bit of both?