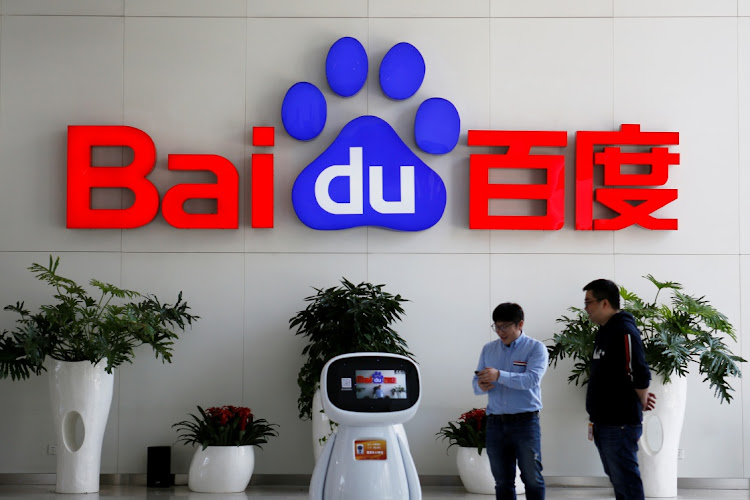 Men interact with a Baidu robot near the company logo at its headquarters in Beijing, China, April 23 2021. Picture: REUTERS/FLORENCE LO

Baidu is selling $1bn of bonds in a two-part sustainable deal, according to people familiar with the matter, marking the first major global debt offering by a Chinese tech firm since Beijing escalated a crackdown on private enterprise.

The internet search giant, an investment-grade issuer, will sell 5.5-year and 10-year notes at 83 basis points and 113 basis points, respectively, above comparable treasuries, said the people, who asked not to be identified because they’re not authorised to speak about it publicly. A Baidu dollar bond maturing in 2026 was trading on Wednesday at a spread of 83 basis points, according to data compiled by Bloomberg.

The firm earlier received a $1bn bond sale quota from the National Development and Reform Commission, China’s top economic planning agency. Borrowers can choose whether or not to use the full amount.

“Baidu’s proposed $1bn of new bonds may provide a pickup of just 10-20 basis points over existing bonds due 2026 and 2030 for a year longer in maturity,” according to Bloomberg Intelligence analyst Cecilia Chan.

The deal is Baidu’s first return to the dollar bond market since October and follows mobile phone maker Xiaomi’s $1.2bn offering in July, which also included a green note. Planning to use the proceeds for general corporate purposes and debt repayment, Baidu is now spending heavily to reposition itself as an artificial intelligence company with use cases in everything from ride-hailing to smart speakers and the cloud.

While Baidu so far hasn’t been one of the main targets under Beijing’s campaign to rein in big tech, the clampdown on for-profit after-school tutoring will likely restrict the spending power of some key ad clients.

“There will be some level of risk premium from the China tech crackdowns that Baidu will have to pay,” said Kaveh Namazie, senior credit analyst at Australia & New Zealand Banking Group.

“Baidu historically has a fair amount of demand from the US, and they may see some reduction there given recent headlines from last two months. But for a company like Baidu, they will still have sufficient demand to do the deal.”

Offshore bonds sold by China’s major tech firms have enjoyed robust demand in recent years, with strong support from both local and US buyers. Xiaomi’s offering in July, for example, attracted more than $7bn of orders, even as regulators moved to increase scrutiny of the industry.

Chinese regulators give cosmetic surgery loans a nip and tuck