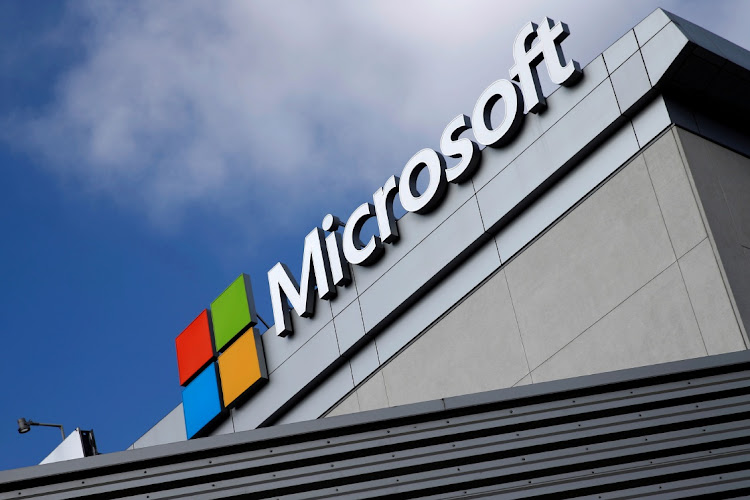 A Microsoft office in Los Angeles, California, the US. Picture: REUTERS/LUCY NICHOLSON

Microsoft reported sales and profit that exceeded analysts’ estimates for a 10th straight quarter, though investor optimism was tempered by concern about slowing growth in the software giant’s Azure cloud-computing business. Shares slipped in late trading.

Sales in the fourth quarter, which ended June 30, climbed 21% to $46.2bn, the Redmond, Washington-based company said on Tuesday in a statement. That compared with the $44.3bn average estimate of analysts polled by Bloomberg. Net income rose to $16.5bn, or $2.17 a share, while analysts had predicted $1.92.

Microsoft’s market value now tops $2-trillion, and the high-flying shares have led investors to expect results to outdistance projections by a wide margin, said Brent Thill, an analyst at Jefferies, in a note before the numbers were released.

Azure sales increased 51% in the period, and some investors hoped for a faster rate of growth, especially because that revenue rose 45% when accounting for currency fluctuations. While Azure has been growing steadily, it faces steep competition for big deals from Amazon, the dominant cloud service, and Google, which ranks third in the market but is pouring resources into the business as it works to catch up.

“People are not happy if Azure decelerates — they’re worried the good days are over,” said Mark Moerdler, an analyst at Sanford C  Bernstein. “People seem to worry Azure will never be as big as Amazon.”

Azure revenue had gained 50% from a year earlier for the two prior quarters, not taking into account currency fluctuations. In the March quarter, Azure posted a 46% sales gain in constant currency -- so on that basis, the recent period’s increase marked a slowdown.

Microsoft shares dropped about 2.5% in extended trading following the report, after declining to $286.54 in New York. The stock rose 15% in the fiscal fourth quarter, compared with 8.2% for the S&P 500 Index, reflecting investor optimism about growth prospects for Azure, Office, artificial intelligence and gaming.

Commercial cloud sales in the fiscal third quarter rose 36% to $19.5bn, Microsoft said. Gross margin, or the percentage of sales left after subtracting production costs, in that business widened 4 percentage points to 70%, the company said in a slide posted on its website. Total company gross margins have been benefiting from an accounting change that’s related to current and future server and network equipment, and this may be the last quarter where that leads to an improved margin, according to Bloomberg Intelligence analyst Anurag Rana.

“This year has been great because of the accounting change but that particular boost is hiding the fact that gross margin is being hurt by the faster-growing Azure business,” Rana said before the results.

In the Productivity unit, mostly made up of Office software, sales were $14.7bn, compared with an average analysts’ estimate of $14bn. Sales of Intelligent Cloud products rose to $17.4bn, above analysts’ expectations for revenue of $16.4bn.

In the More Personal Computing unit, which includes products such as Windows, Surface and Xbox, sales were $14.1bn. Analysts had expected $13.9bn. Sales of Windows software sold to PC manufacturers declined 3%, a drop that reflects the surge in laptop buying in the same quarter a year earlier, when Covid-19 lockdowns were forcing many workers to do their jobs remotely.

Overall gaming revenue jumped 11% in the recent period, Microsoft said, with Xbox hardware sales more than doubling. A global semiconductor shortage has constrained sales of Xbox consoles following the release of a new machine late last year, and growth in video-game and gaming services fell 4% in the quarter compared with the pandemic-boosted year-ago period.