Technology services group Sebata, which reported a 79% drop in full-year revenue, says there has been an increase in tenders being awarded by the government after a decline in 2020 that dragged its earnings down more than 100%.

The awarding of new business is likely to boost the company’s dwindling revenues and stop its process of offloading non-performing assets.

The company, which supplies local government services such as meter reading and software, said a slowdown in procurement by the state has continued to negatively affect its business, an issue that plagued the business at the same time in 2020.

In its financial results statement issued on Wednesday, Sebata said it has “experienced an accelerated slowdown in government spending”.

The group said there has been “more movement” in the tender space, and “it appears that at the operational level things are returning to a sense of normality, and we have noticed an increase in tenders going out and being awarded”.

Sebata said its revenue for the year to March shrank by almost three quarters, from R161.4m to R33.9m. 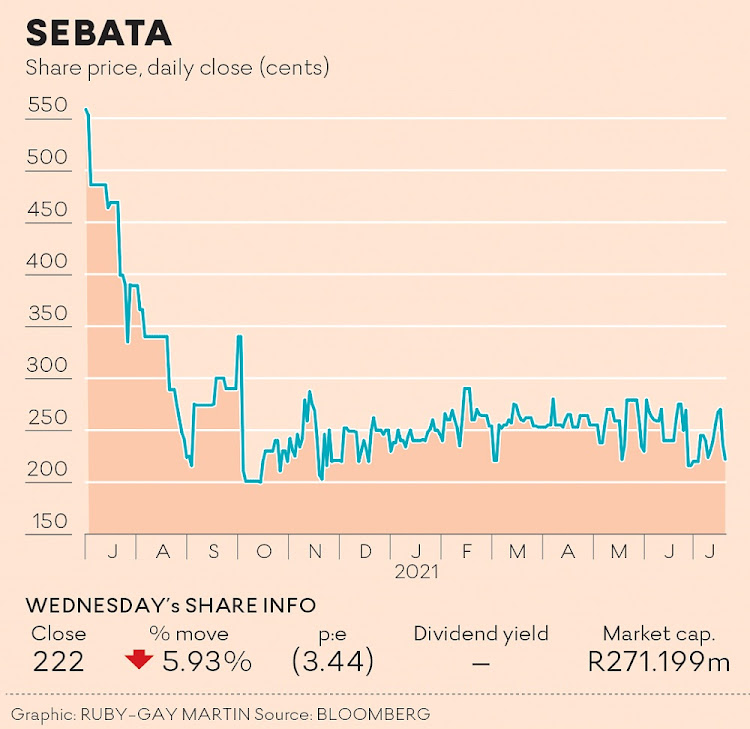 The group, formerly MicroMega Holdings, reported a basic loss per share of 47.36c, a decrease of  110.6% compared with the positive earnings of 448.27c in the previous full year.

Headline loss per share, which takes out the effects of one-off financial events, was at 28.46c, reflecting an improvement on the prior loss of 107.57c, up 73.5%.

Sebata, worth R255m, also noted that decision-making in the local government sphere had slowed, and this was reflected in the number of tenders that have been extended and remain in the adjudication phase.

Sebata has been restructuring its business in recent years, having disposed of a number of assets seen as unfit for its portfolio.

In 2020, it sold its Software Group Companies for R501.9m to Inzalo Capital Holdings to improve its empowerment credentials.

In terms of the deal, Sebata sold a 55% stake in Software Group Companies, which is made up of Sebata Municipal Solutions, R-Data and Micromega Accounting and Professional Services, which were all wholly owned subsidiaries of the company. A further 5% stake will be donated to Inzalo by Sebata.

The group disposed of its 30% interest in Kyostax in March. The disposal formed part of the settlement of a liquidation application Kyostax had launched against Sebata because of outstanding rentals during the national lockdown.

As part of the settlement, the group said it exchanged its shares in Kyostax that had a carrying value of R22.3m as relief against the R8.6m it owed for rentals and utilities.

The transaction resulted in a loss on disposal of R13.7m.

Despite such losses, Sebata said the restructurings have allowed it to “return to a more sustainable operational state and allowed the board to strengthen up the balance sheet”.

The company warned that it expects a further contraction in the SA economy as the effects of Covid-19 continue to be felt by industries and companies alike.

The group says it anticipates that the effects of Covid-19 “have not been outlived and we will experience a further contraction of the local economy”. Sebata expects this contraction to reflect in its results in the coming months.

A little-traded stock, shares in Sebata were down 5.93% on Wednesday at R2.20. The share has lost almost half its value, down 44%, over the last year.

Buying into the JSE’s illiquid and little-known counters can pay off, big time. But do your homework
Money & Investing
3 weeks ago

Sebata sells another subsidiary to Inzalo in latest B-BBEE deal

The tech group disposes of Software Group Companies for R501.9m to boost its empowerment credentials
Companies
1 year ago

The technology group, which services municipalities and the public sector, suffered a loss from continued operations of R123m
Companies
1 year ago
Next Article