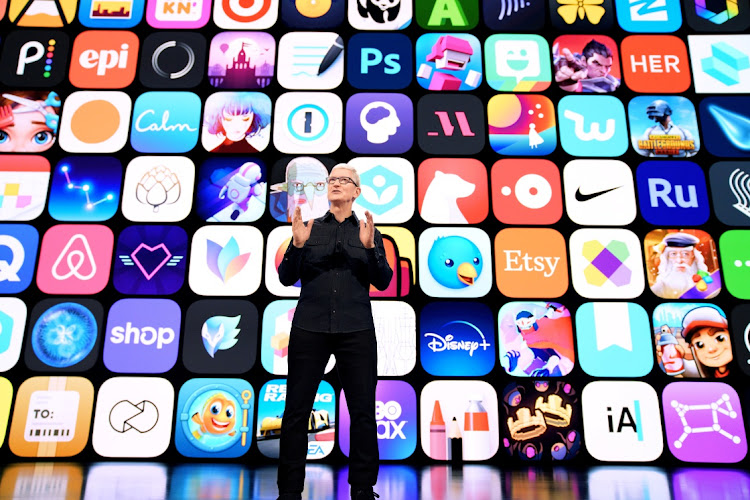 San Francisco — Apple said on Monday it will offer the ability to store state-issued identification cards digitally on iPhones and added user privacy protections on its iCloud storage service and e-mail apps, among several updates to the software on its devices.

It also showed updates to its FaceTime video chat app, adding the ability to schedule calls with multiple attendees and making the software compatible with Android and Windows devices.

The move, which puts Apple in more direct competition with companies such as Zoom Video Communications that gained prominence during the pandemic, was the first major announcement from Apple's annual meeting for software developers.

Apple said users will be able to scan state-issued ID cards in participating US states and the cards will be encrypted in a user's digital wallet, where the company now offers the ability to store credit cards and transit cards in some US cities. It is working with the US Transportation Security Administration to accept the digital IDs at airports.

Apple changed the name of its paid iCloud storage service to iCloud+ and added privacy features. One, called private relay, obscures a user’s identity and browsing behaviour from both Apple and advertisers. Another lets users hide their e-mail address when filling out online forms. Apple said iCloud pricing will not change despite the new features.

Also on the privacy front, Apple said it was updating its e-mail apps to block senders using trackers that detect when an e-mail is opened. The company also introduced a new way to track where third-party services apps send data, and said its Siri voice assistant will no longer need to connect to Apple’s servers to respond to some requests.

Several of the features Apple introduced, such as the ability to snap a photo of a sign and use artificial intelligence to pluck out the written text, have been present on the rival Android operating system for several years.

Apple said it will let users control other Apple devices such as iPads from Mac computers and laptops. It announced other software improvements to make working across its devices easier. These features, like many other flagship Apple features, will not work with third-party devices.

Apple introduced what it calls in-app events, a way for developers to host live events within apps and have those events featured in real time in the App Store. The move could intensify competition with Facebook, which on Monday said it was planning to launch an online events business that would be free until 2023 and thereafter will charge commissions lower than Apple's 30% fees for the App Store.

The Apple Worldwide Developers Conference, held online for the second year because of the pandemic, typically attracts thousands of app developers, many of whom hope the company will be listening to their concerns.

Apple’s control over what apps make it onto its app platform, and its 15% to 30% commissions on digital sales, have come under regulatory scrutiny and were at the heart of an antitrust lawsuit brought by Fortnite creator Epic Games, where a federal judge is considering how to rule.

Apple has said its App Store practices grow the market for mobile software by creating an environment for paid apps that consumers trust.

Not all developers have negative sentiments, said Ben Bajarin, CEO at Creative Strategies who has been surveying Apple developers and found more than 90% have no plans to stop making apps for Apple devices.

However, some complaints are widespread, with more than half of developers saying fees should be capped at 10%, and many wanting more clarity on reasons for rejecting apps from the App Store and how to resolve such issues, Bajarin said.

Amazon, Facebook and Google have had their time over the barrel during the Trump era ‘techlash’ — now it is Apple’s turn
Life
1 year ago