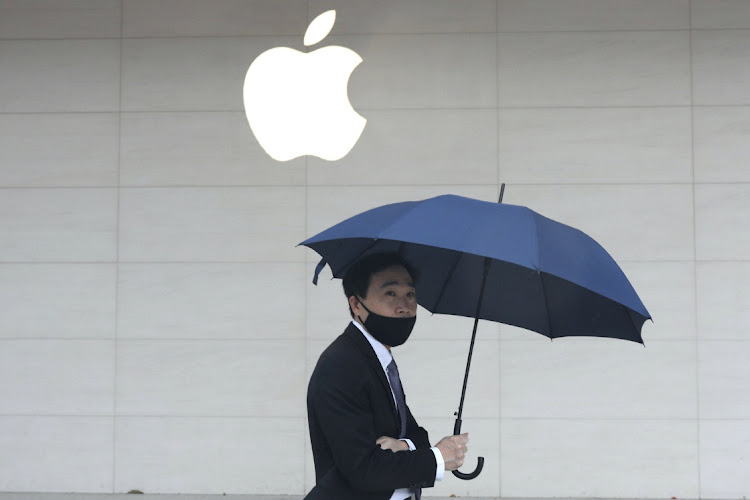 A man walks past an Apple store in Taipei, Taiwan, on October 20 2020. Picture: REUTERS/ANN WANG

CNIL, the regulator that oversees privacy and data, is examining allegations by France Digitale, a lobbying group representing start-ups and venture capital firms, a spokesperson for the watchdog said in response to questions. France Digitale filed the complaint last week.

France Digitale says Apple’s personalised advertising feature — which shows ads in the App Store, Apple News and the Stocks app — is based on user data, but doesn’t seek consent before sending targeted ads. The complaint comes as Apple as prepares to release an iPhone and iPad software update that limits how much data third-party advertising systems, such as those from Facebook, can gather about users.

Users are “insufficiently informed” about the use and the processing of their personal data, France Digitale wrote in its complaint to CNIL, which was seen by Bloomberg News and confirmed by the regulator.

Apple spokespeople did not immediately return e-mails or phone calls seeking comment. Apple has previously called allegations in the complaint “patently false” and said “privacy is built into the ads we sell on our platform with no tracking”.

The investigation may eventually be dismissed, lead to requests for Apple to make adjustments to its system or become an in-depth probe with CNIL imposing sanctions, said spokesperson Yohann Brunet. The timing of the probe is undefined, he said.

“We have to do a detailed study of what’s been sent to us” before CNIL decides whether the EU’s data protection or e-privacy rules are at issue in the case, Brunet said.

France Digitale’s move comes after a group of French online advertisers filed a complaint with the country’s competition authority, asking it to halt changes in how iPhone users’ data is collected. The group of four advertising lobbies said the changes violated EU rules on user consent, saying Apple can still deliver personalised advertising via a default setting, holding itself to a different standard.

The French antitrust ruling, which could have implications for Apple’s planned iOS 14 update, is expected imminently.

The UK’s CMA, no longer bound by EU rules, says Apple may be using its market position to set terms that are unfair or may restrict competition
Companies
8 months ago