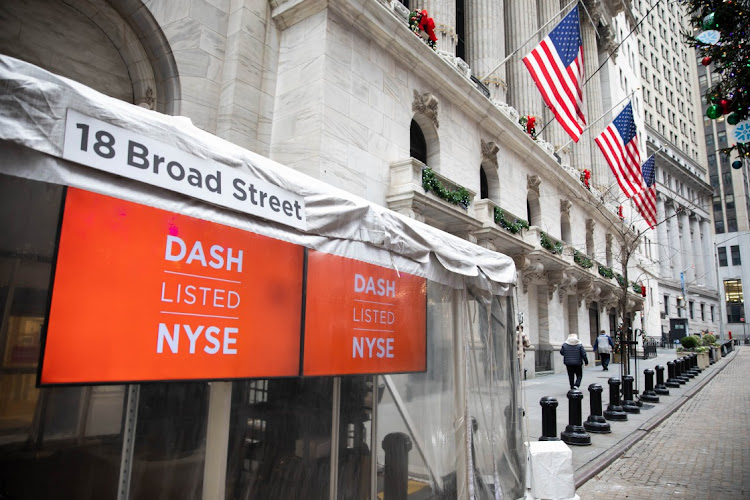 A DoorDash sign outside the New York Stock Exchange during the company's IPO in New York, the US, December 9 2020. Picture: MICHAEL NAGEL/BLOOMBERG

New York — Shares of unprofitable food delivery platform DoorDash  surged as much as 92% in their trading debut on Wednesday, in the latest sign of investor exuberance in what has already been a record year for IPOs.

DoorDash, which has seized on the pandemic-fuelled boom in demand for meals brought to your door, saw its shares climb as high as $195.50 in New York after raising $3.37bn in its initial public offering. The first-day jump, which if it holds would be the third biggest this year, gives DoorDash a market capitalisation of $55bn and a fully diluted value of $66bn — larger than companies including Kraft Heinz, Lululemon Athletica  and Ford Motor.

Investors looked past concerns that competition from rivals such as Uber Technologies  may heat up in 2021, just as the distribution of vaccines reduces the need for at-home dining. DoorDash’s surge also bodes well for companies such as Airbnb  that are looking to add to the more than $160bn already raised by IPOs in 2020.

The IPO is the third-largest on a US exchange this year, exceeded only by the $4bn blank-cheque company backed by billionaire Bill Ackman and software maker Snowflake’s $3.86bn offering including so-called greenshoe shares.

DoorDash had 50% of US market share as of October, surging past UberEats, GrubHub and Postmates, according to its filing documents. That number is up from just 17% in January 2018. DoorDash said there is also an opportunity for that market to expand, with fewer than 6% of US residents now using its service. Revenue in the first nine months of the year more than tripled and its net loss narrowed from a year earlier on a surge in new customers, the company said.

Some sceptics don’t expect the increase in at-home dining to last.

“As we go from being stuck at home to wanting to venture out, people are less likely to want to go and order delivery,” said Max Goodman, head of asset allocation at Pacific Life Fund Advisors. “They’re going to want to actually go out and go to a restaurant.”

He added that the market could also get more competitive, especially as rival Uber sees a pickup in its ride-sharing business, which could help subsidise its food delivery investment.

While DoorDash helped many restaurants stay afloat as pandemic lockdowns forced them into a takeout-only model, the fees that it charges, which can be 30% of the cost of an order, are seen as unfair by some eateries. Certain cities, including New York and Seattle, have set limits on the amount of fees delivery services can charge restaurants.

The company started by doing deliveries in Palo Alto, California, where Tony Xu and his two co-founders were students at Stanford University. They often did the deliveries themselves in the evenings after classes.

“It’s certainly surreal,” Xu said on Wednesday, recalling the early days when he was “delivering hummus out of my Honda”.

Including DoorDash, companies have now raised more than $160bn in IPOs on US exchanges this year, an all-time high, according to data compiled by Bloomberg. Several more are expected before the end of the year as companies that put off listing plans during the early days of the Covid-19 pandemic regain the confidence to put their shares on public markets.

The next-largest of the group is home-rental platform Airbnb, which is seeking to raise as much as $3.09bn  in its IPO Wednesday. Others include video-game company Roblox, instalment loans provider Affirm Holdings   and ContextLogic, the parent of online discount retailer Wish.

Before the pandemic, food-delivery companies like DoorDash and rivals Uber Eats and GrubHub Inc. struggled to make money amid fierce competition among themselves and blowback over their fees and treatment of workers. Margins in the business are razor thin, prompting a wave of consolidation that saw GrubHub agree in June to get bought by Just Eat Takeaway.com   for $7.3bn, and Uber acquire Postmates  for $2.65bn in an all-stock deal in July.

One advantage of such a ‘slow-burn’ buyout, is that it gives SoftBank flexibility to purchase its own stock when it dips
Companies
6 months ago