Pharmacy group Dis-Chem says it is pleased with the performance of its businesses given general pressure on consumers, with profits up by more than a quarter in its year to end-February.

Dis-Chem, valued at R32.2bn on the JSE, said earlier in 2022 there had been a sustained return to regional shopping malls, where many mature stores are located, even as SA dealt with its less-severe fourth wave of the Covid-19 pandemic, resulting in muted demand for preventive healthcare products, such as vitamins. 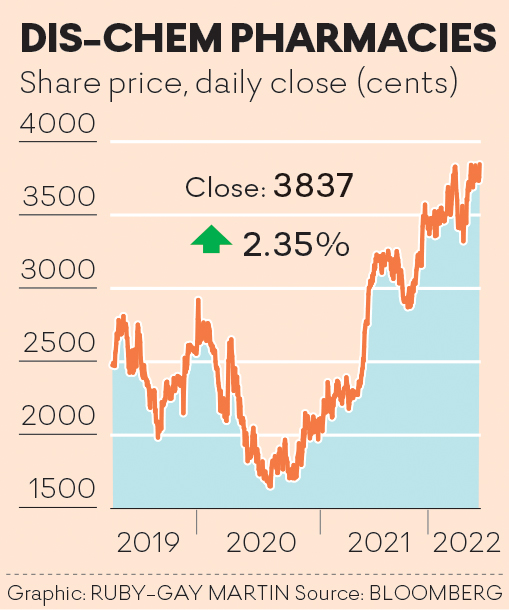 The pandemic has put pressure on larger malls, which experienced a significant decrease in footfall as people opted to either shop online or at convenience centres to reduce their risk of transmission.

Dis-Chem said on Thursday it was also benefiting from successfully integrating its recent acquisitions, and it had spent R282m acquiring the Medicare group, effective on October 1, which added a net 49 additional stores to the group’s portfolio, bringing it to almost 300.

The group, founded in 1978, had also announced it was buying Baby City for R430m, which added more than 30 stores to its portfolio.

The purchase of the depots in Cape Town, KwaZulu-Natal and Mpumalanga come into effect on March 1
Companies
3 months ago

Clicks's plan to increase market share in the health, beauty, baby and pharmacy sectors will see it surpass its target of  900 outlets target and ...
Business
6 months ago

PIC doubles its stake in Dis-Chem

PIC doubles its stake in Dis-Chem